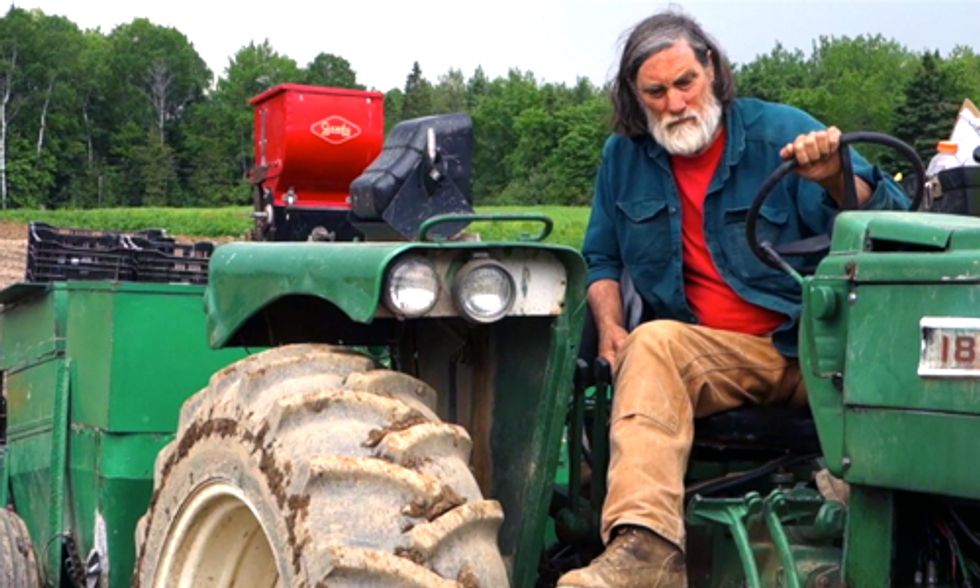 Last week, the Public Patent Foundation filed a brief with the U.S. Supreme Court in the landmark case, Organic Seed Growers and Trade Association (OSGATA) et al v. Monsanto, in the hopes that the highest court in the land would hear and reinstate the case of 73 American organic and conventional family farmers, seed businesses and public advocacy groups that seek protection for America's farmers from Monsanto's frivolous patent infringement lawsuits, and their promiscuous genetically engineered pollen while also seeking to invalidate the patents on 23 of Monsanto's genetically modified organisms (GMO) crops.

Jim Gerritsen, an organic seed farmer on Wood Prairie Farm in Maine and president of lead plaintiff Organic Seed Growers and Trade Association, has spent the past 37 years of his life protecting and maintaining the integrity of his seed stock to provide clean, wholesome food to his customers.

Earlier this month, Monsanto filed an opposition brief with the Supreme Court in a last ditch effort to deny a group of American family farmers and seed growers justice in their efforts to protect their farms and the integrity of their crops.

"In opposing our request that the Supreme Court take, and then reinstate, our case, Monsanto makes the same lame and untrue assertions that it made before," said Daniel Ravicher, executive director of the Public Patent Foundation (PUBPAT) and lead counsel to the plaintiffs in OSGATA et al v. Monsanto. "In our reply brief filed with the Supreme Court we point out precisely why Monsanto is wrong and that the case should be allowed to proceed," claimed Ravicher.

On June 10, a three-judge panel at the Court of Appeals for the Federal Circuit in Washington, D.C., issued a bizarre ruling that plaintiffs are not entitled to bring a lawsuit to protect themselves from Monsanto's transgenic seed patents "because Monsanto has made binding assurances that it will not take legal action against growers whose crops might inadvertently contain traces of Monsanto biotech genes" as stated anonymously on the company's website.

Farmers find this ruling inconclusive and  insufficient to protect their future economic interests since the Court of Appeals readily admitted that contamination from Monsanto's genetically engineered crops is "inevitable."

This Appellate Court ruling importantly validated that farmers do have a legitimate fear of contamination, something that the court and Monsanto's own attorney, former Solicitor General Seth Waxman, admitted in court during oral arguments.

Despite dismissing the farmers' and seed growers' case, the Court of Appeals ruling found the likelihood of contamination significant enough to order by estoppel that Monsanto make good on its promise not to sue farmers that are "inadvertently contaminated with up to one percent of seeds carrying Monsanto's patented traits."

"As a seed grower, who has spent the past 37 years of my life protecting and maintaining the integrity of my seed stock to provide clean, wholesome food to my customers, I find it unconscionable that Monsanto can contaminate mine or my neighbors' crops and not only get away with it, but potentially sue us for patent infringement," said Jim Gerritsen, an organic seed farmer on Wood Prairie Farm in Maine and president of lead Plaintiff OSGATA. "The appeals court ruling fails to protect my family and our farm and has only complicated matters,"said Gerritsen.

Because of the insidious nature of GMO contamination and the fact that pollen naturally blows or migrates to neighboring fields, contamination of farmers' fields above one percent is both predictable and unavoidable.

Already, reports of contamination across North America exceeding one percent have led an increasing number of farmers to incur considerable costs in testing their crops and seed supply for transgenic contamination or actually forgo planting of certain crops in order to maintain seed purity.

Significant contamination events happened in the U.S. this year alone, with an unapproved experimental variety of Monsanto's GMO wheat discovered in a farmer's field inOregon this past May. According to the U.S. Department of Agriculture (USDA), the illegal GMO wheat had been field-tested between 1998 through 2005, but never approved by the USDA. Its discovery sent shockwaves through international markets and caused Japan and South Korea to halt shipments of U.S. wheat for more than a month.

A similar event occurred in September when a Washington state farmer reported that his hay was rejected for export because it tested positive for contamination from Monsanto's genetically engineered alfalfa.

"For farmers, recent events in Washington and Oregon make clear that the damages of contamination are far-reaching in their impacts on farmers' economic survival, can be permanent and irreversible in their harm to our food supply and only can be properly redressed by a favorable ruling from the Supreme Court," said Dave Murphy, founder and executive director of Food Democracy Now!, a grassroots advocacy group based in Iowa and a plaintiff in the case.

"It's time to end Monsanto's campaign of fear against America's farmers and stand up for farmers' right to grow our food without legal threats and intimidation. America must no longer allow Monsanto to contaminate our food supply and destroy the livelihoods of farmers. Farmers deserve protection from these abuses," said Murphy.

Farmers expect to hear whether or not the U.S Supreme Court will hear their case next year and eagerly await their day in court.