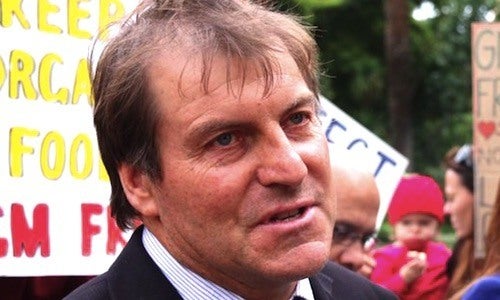 Marsh claimed that he lost organic certification on approximately 70 percent of his property in Kojonup, Perth after winds carried his neighbor’s Roundup Ready canola seeds onto his farm in 2010.

Australia has a zero-tolerance organic standard concerning GMO contamination on organic lands and Marsh sought $85,000 in damages against his neighbor and former childhood friend.

Marsh lost the lawsuit in a May 2014 ruling from the Supreme Court of Western Australia and was ordered instead to pay court costs of about $804,000. He appealed the decision to the West Australian court of appeal but in September, the court instead ruled in favor of Baxter.

Today, after six years of legal wrangling, the High Court rejected Marsh’s bid for leave to appeal against that ruling.

Left with no further avenue of appeal, Marsh told Australia’s ABC News that he was very disappointed. “We lost our income, practically half our growing income for three years, but it appears that we can’t claim compensation for that, it’s extraordinary,” he said, adding that while the court case had cost millions of dollars, it was an important issue for the organic industry.

“I will try and hang onto our farm, it is our business and we will try and do the best we can,” Marsh said. “I think that this case has highlighted that more than ever and issues about food and its safety and how we produce it.”

Baxter told ABC News he was relieved about the result, describing the process as “six years of rigamarole.”

This case highlights the challenges facing organic farmers whose crops are contaminated by GMOs, Ken Roseboro, editor of The Organic & Non-GMO Report, said.

“They suffer economic losses and have no recourse to regain those losses and such contamination can ruin their organic certification and make potential buyers leery of buying their crops,” Roseboro told EcoWatch. “The situation is very unjust and biotech/pesticide companies should be held liable for their contaminating GMOs. This case also shows that so-called coexistence of GMOs and organics is very difficult, if not impossible, to achieve when there is no liability on the GMO producers or companies.”

Lawyers told Reuters in May that a win for Marsh on the grounds of trespass would have led to new rules, such as larger buffer zones between GMO and organic farmers, potentially curbing the amount of GMO canola being planted.

Opponents of the suit claim it would have burdened GMO farmers with more rules and potentially restrict the amount of crops a farmer could plant.

“Although we were not a party to the litigation, we respect Michael and Zanthe Baxter’s choice to defend themselves. Their neighbor initiated a legal claim against them when they were responsibly growing a safe and legal crop, as was clearly established in the Supreme Court’s verdict,” Monsanto Australia’s managing director Daniel Kruithoff said in a statement.

“Both farmers were entitled to seek support for this legal dispute so that their arguments could be heard in court. It was only fair that the Baxters received much needed support given the extensive fundraising efforts of Steve Marsh’s supporters. Monsanto Australia contributed to the Baxter’s legal costs to ensure they could defend themselves in court,” Daniel said.

Marsh’s campaign was supported by the Safe Food Foundation, a nonprofit food advocacy group. The Australia-based organization produced the short clip below to give a background on Marsh’s case.

Farmers who have not purchased GMO seeds and find the crops growing on their land face potential litigation from the seed producers for patent infringement.

Monsanto, the world’s largest producer of genetically modified seeds, is known to be an especially aggressive GMO patent-infringement litigant and has filed at least 140 cases and settled 700 more against farmers for planting the company’s GMO seeds since 1997—and they haven’t lost a single case.

In 2014, the U.S. Supreme Court handed Monsanto a major victory when it dismissed the 2011 case Organic Seed Growers and Trade Association et al. v. Monsanto that meant to stop the company from suing farmers who inadvertently found themselves accused of patent infringement when their land gets contaminated by Monsanto seeds.

Ronnie Cummins, international director of the Organic Consumers Association, said of Marsh’s case: “This is a perfect example of how the biotech industry and genetic engineering undermine not only human health, and the health of the environment, but also the very basis of democracy itself, and the long-held rights of farmers to protect their land from toxic trespassing.”

Right now in Oregon, for instance, organic farmers reported suffering financial losses because of contamination from nearby GMO crops due to a 2013 law prohibiting local governments from regulating crops or seeds.

It appears that agribusinesses funneled large sums of money to the area’s lawmakers to ensure passage of the 2013 legislation. According to the Statesmen Journal, companies such as Monsanto, Novartis and Syngenta contributed at least $127,745 in 2013 to legislators’ campaign committees, the two Republican caucus political action committees, and three other PACs that contribute to candidates.

Dozens of people recently testified at a hearing on HB 4122, which would repeal the law.

“We lose money when we have a GMO contamination event, which I’ve had happen twice,” Don Tipping, an organic seed grower from Williams, said at the hearing. “We lost money directly, as have other growers.”

Advocacy groups are urging for better protections for farmers against GMO contamination.

“All over the world, organic farmers are paying the price for GMO contamination,” Food & Water Watch assistant Patty Lovera told EcoWatch. “The companies that sell patented GMO seeds should be held responsible for preventing this contamination and held liable if it happens, instead of putting all of the burden on farmers who don’t use their seeds.”

Dave Murphy, founder of Food Democracy Now!, agrees. “This is a classic case of Monsanto’s genetically engineered crops causing harm to a neighboring farmer’s land and there is no legal mechanism to protect that family farmer from the negative consequences of contamination, either financially or through contamination of seed stock,” he said.

“Every year organic and non-GMO farmers’ crops are contaminated with Monsanto’s predatory technology and it puts their economic livelihood at risk. If Monsanto can force farmers to pay royalty fees for their patented GMO seeds, they should be held liable when those patented genes end up in another farmers field, which causes them serious financial losses. We need fair laws that protect organic and non-GMO farmers from the economic hardships caused by genetic contamination of their crops, unfortunately the current legal system is rigged to protect Monsanto, not family farmers.”