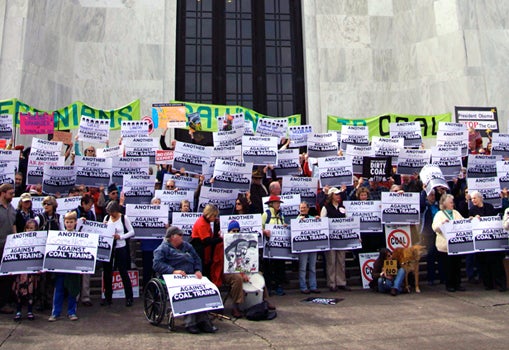 More than 450 Oregon residents and a diverse group of local leaders flooded the steps of Oregon’s Capitol Wednesday morning to call on Governor Kitzhaber to deny Ambre Energy a dredging permit at the Port of Morrow. 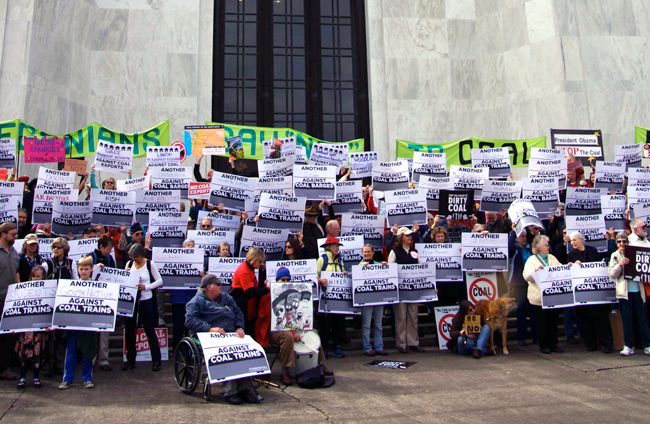 Many community leaders and residents feel they can’t trust the Australian-based coal company which in 2011 lied to the community of Longview about its plans to expand from annual coal shipments of 5 million tons to as much as 80 million tons—15 times the amount claimed on its application.

Ambre’s dredging permit is set to be approved or denied by the Department of State Lands (DSL) by April 1. If approved, the Morrow Pacific project would be the first of five proposed coal export facilities to get the green light in the Northwest, opening the floodgates for the region to become a hub for dangerous fossil fuel exports.

The Morrow Pacific project is essentially unstudied, yet Ambre Energy and its partners are pushing public officials to ignore their due diligence and move forward with permit issuance without so much as a public review. Dr. Patrick O’Herron, M.D., a local surgeon practicing trauma and acute care surgery in Salem warns that Oregonians are being set up to be guinea pigs for a dangerous experiment if hundreds of coal trains are allowed to pass through local communities every month, blocking crucial intersections and delaying emergency response times. 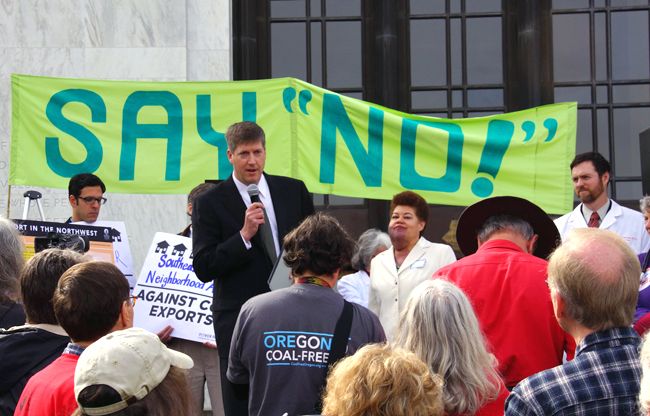 “In trauma we speak of the golden hour. If a patient can be in the operating room within an hour of being injured they can survive pretty horrific injuries,” said Dr. O’Herron. “An hour from injury to the operating room doesn’t leave much time for dilly dallying. Would you want to be bleeding to death from an injury in the back of ambulance waiting for a mile and a half long coal train to lumber by?”

Many have expressed concerns about the damages coal trains will cause to local communities still trying to recover from the recession. Anjala Ehelebe, a historian and Land Use co-Chair of the Woodlawn Neighborhood Association says that even through the few “rough decades” she and her disabled husband have loved the years they have lived in the fascinating Woodlawn neighborhood, but she now worries that coal trains will harm its recovery just as the town starts to flourish again.

“The original Town of Woodlawn first flourished in 1888 when a passenger railroad was extended into its center and a train station was built on a triangular block,” said Ehelebe. “Now, almost 130 years later, proposed mile-long trains with open railcars of coal may start choking our neighborhood’s health and prosperity.”

If the proposed coal export projects along the Columbia River are permitted to move forward, coal barges are expected to double the barge traffic on the river, raising serious health, safety and general commerce concerns. 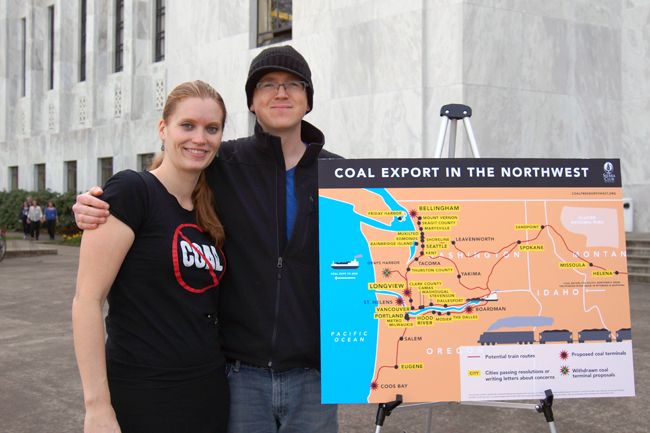 Bob Rees, President of Northwest Guides and Anglers Association in Tillamook, is a sixth-generation Oregonian, life-long sportsman, and a professional fishing guide for over 20 years. He points to the environmental degradation that occurs with immense carbon emissions associated with the transporting and burning of coal as a serious threat to the longevity of the Pacific Northwest fishing industry.

“Coal is a leading culprit in the further degradation of our sensitive environment,” says Rees. “Our Pacific Northwest salmon stocks need clean water and healthy ecosystems. Coal exports push these already sensitive fish populations in the wrong direction, further jeopardizing the tens of thousands of jobs that salmon currently support.”

Echoing concerns about jobs, Marshall Runkel, a managing partner of GreenHome by EcoTech says that if we want to grow the economy, we’re going the wrong direction with exporting coal. “We don’t need to strip mine our country and ship our resources overseas to create jobs,” says Runkel. “If our goal is jobs, then we should invest in energy efficiency which would create thousands of great jobs for insulators, electricians, plumbers and HVAC technicians. These industries are integral to the fabric of our local communities.”

Ambre Energy has proposed to ship 8.8 million tons of coal down the Columbia River every year. Coal would be mined in the Montana and Wyoming and shipped by rail to the Port of Morrow in Boardman, Oregon, and then transferred to barges and shipped down the Columbia River to Port Westward, where it would be transferred to ships and exported to Asia.