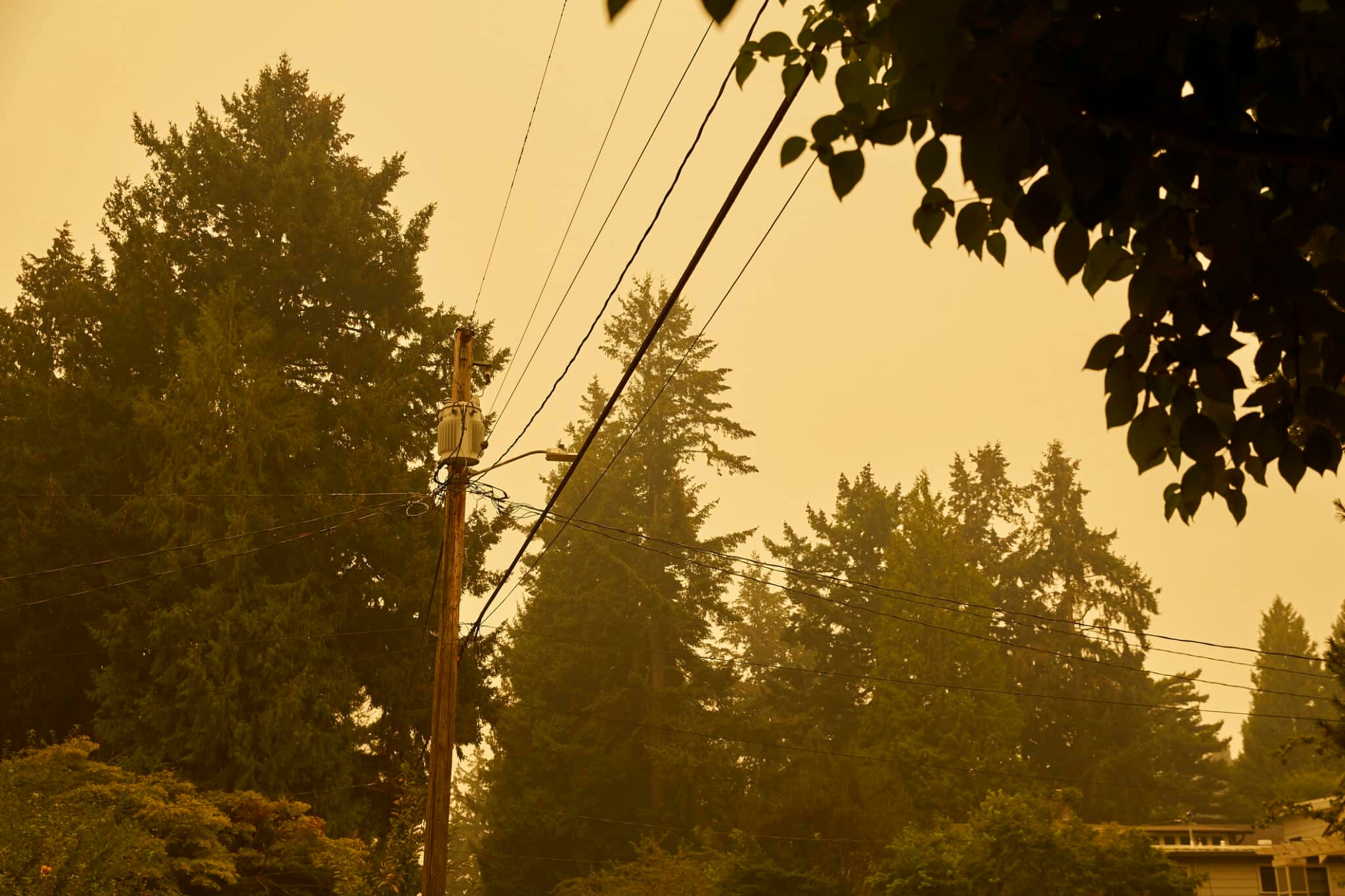 Power lines in Portland, OR against a sky filled with wildfire smoke. EyeWolf

However, its spread to Oregon in the past two years is a clear sign of the climate crisis, as hotter, dryer conditions move northward. On Friday, Portland General Electric (PGE) shut off power to customers for the second time ever and Pacific Power for the first in a bid to prevent their lines from sparking a blaze, as AP News reported at the time.

“People are going, ‘Oh my gosh!’ The areas we thought were safe, they’re realizing those are not immune to fire anymore. The fire likelihood is changing,” director of the Oregon Climate Change Research Institute at Oregon State University Erica Fleishman told AP News.

PGE first shut off power to around 30,000 people in 12 service areas Friday.

“Today, we turned off power to 30,000 customer meters in all 10 PSPS areas as a safety measure to help protect people, property and the environment,” the utility announced on Twitter Friday.

It then added additional shutoffs on Saturday covering five areas and around 1,675 people, Oregon Live reported. The utility said around 37,000 customers ended up without power.

Pacific Power, meanwhile, said on Twitter Saturday that it had activated Public Safety Power Shutoffs for a total of around 12,000 people.

Public Safety Power Shutoffs are used when high winds are forecasted in an area with high fire risk, as Oregon Live explained earlier. The idea is to prevent downed power lines from starting or adding to fires.

The outages came amidst a weekend of dangerous fire activity for both Oregon and Washington. Between the two states, there were 18 large fires raging on Saturday, AP News reported Sunday. As of Monday, that number had fallen to 17, according to the Northwest Interagency Coordination Center (NICC).

In Oregon’s northern neighbor, the Goat Rocks Fire, the Kalama Fire and the Bolt Creek Fire all prompted evacuations, AP News reported Sunday. The latter also sent smoke and ash into Seattle and its surrounding communities and endangered power lines that the Bonneville Power Administration manages over the Cascade Mountain range. Fires themselves can damage power lines because of the particulate matter in the smoke they send up.

“It increases the chances of arcing and starting a fire or even shutting down the power line,” Snohomish Regional Fire and Rescue spokesman Peter Mongillo told AP News.

However, Bonneville chose not to turn them off, saying they were not immediately in danger.

In Oregon, PGE had shuttered power due to fires once before, during devastating fires in 2020, to 5,000 customers around Mount Hood, as AP News reported Friday. Pacific Power had not, but was sued by survivors after their two towns burned to the ground during the destructive fire season. The incident has prompted the utility to improve its safety protocols.

“You can look at the West in general and climate change has impacted areas from Southern California, and then Northern California and now up into this region as well, we’re seeing those same conditions,” Pacific Power spokesman Drew Hanson told AP News. “It’s something we are taking very seriously. We realize the changing landscape. We’ve been changing and evolving along with it.”