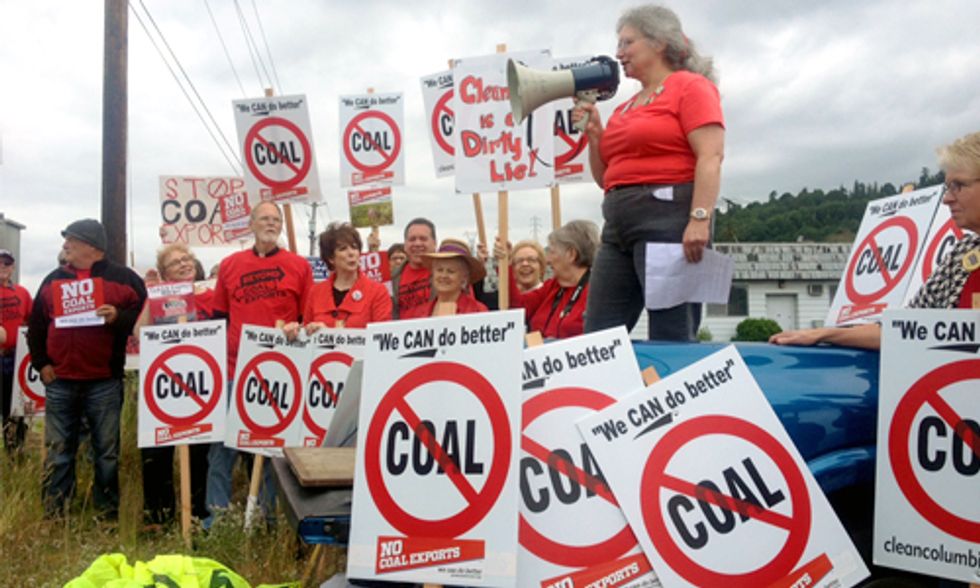 Wyoming Gov. Matt Mead visited Longview, WA, yesterday to sell his dirty coal, but local community members did not roll out the red carpet. Instead, 60 Longview-area residents protested Gov. Mead’s visit, delivering a bucket of Powder River Basin coal that activists had gathered from the side of railroad tracks, spilled by coal trains.

The Governor traveled west to promote a massive coal export terminal in Longview that, if approved, would receive nine full coal trains every day from Wyoming, and ship 44 million tons to Asia every year.

Gov. Mead tried to convince folks that coal is good for them. The protestors weren’t buying it. Armed with megaphones and signs, protestors greeted the Governor when he toured the proposed coal terminal saying: Governor, keep your coal in the ground. We don’t want it here in Washington.

“The benefits the Governor seeks for Wyoming are dwarfed by the damage mining and exporting coal would bring to his own people, the people of Longview and the rest of the world,” said Reverend Kathleen Patton of Longview.

There is tremendous opposition to coal exports in Longview and across the Pacific Northwest. A record 200,000 citizens submitted comments on the Longview coal terminal and 2,000 showed up to testify in person.

Despite Gov. Mead’s salesmanship, I am hopeful that our Washington leaders will reject coal exports because it’s bad for our health and untenable for our climate.