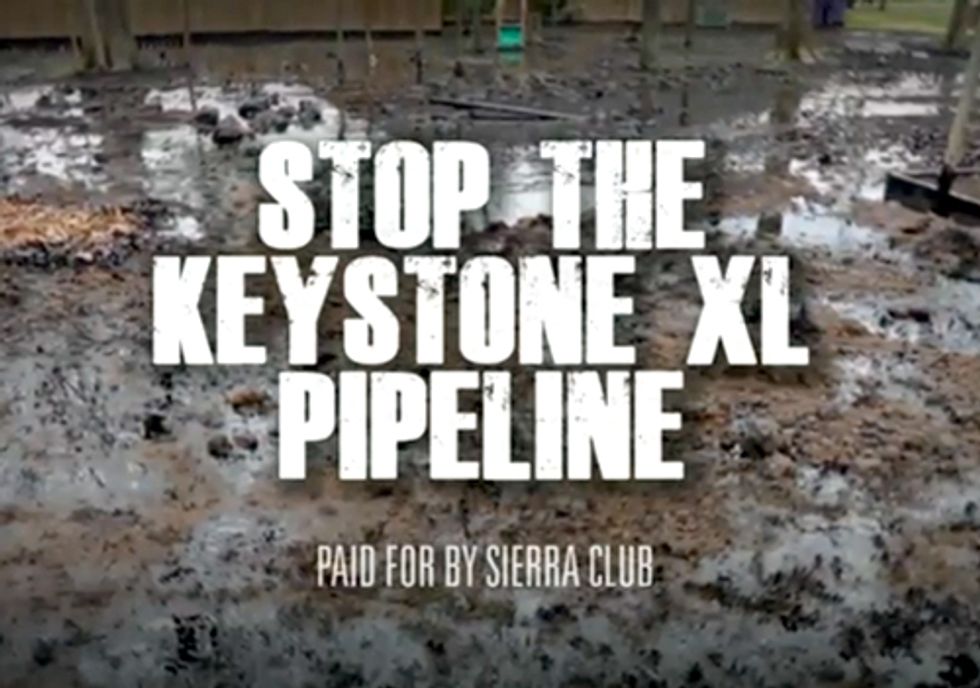 Landowners, community leaders, experts and activists gathered in Grand Island, NE with a clear message to State Department on the Keystone XL pipeline: this pipeline is too risky for American families because of its threats to water, land and climate.

The recent Arkansas tar sands spill highlights the risks of piping corrosive tar sands across the country on a route that crosses through the Ogallala Aquifer, one of the country’s largest sources of freshwater. The Keystone XL tar sands pipeline would be nearly twice as wide as the one that ruptured in Arkansas, and would carry almost nine times as much tar sands oil every day.

Pipeline opponents are flooding the airwaves on TV and radio while decision-makers are in Nebraska for the hearing. The “All Risk, No Reward” Coalition will be saturating the Lincoln market and cable news with a TV spot, Nebraska Sierra Club has three radio ads on five stations covering almost the entire state and a TV spot running on the 10 p.m. news and BOLD Nebraska has a TV ad on three cable providers covering the Omaha, Lincoln and central Nebraska markets.

Activists from across the region—including buses and vans from MO, KS, IA, MN, IL, WI and CO—came to Nebraska to express concerns about water, land and climate.

Pipeline opponents held a press conference before the hearing to express these various concerns:

“The risky route still cross the Sandhills and our main sources of water including the Ogallala Aquifer,” said Jane Kleeb, executive director of BOLD Nebraska. “The DEQ [Department of Environmental Quality] can shrink the Sandhills to give TransCanada political cover but they can't shrink the risk to our homes and livelihoods.”

“We will be the ones left fixing the fences while Big Oil and the Canadian government reap the rewards,” said Nebraska landowner and “All Risk, No Reward” Coalition chair Randy Thompson. “We are now entering the final rounds of this bout, and soon President Obama will have to declare a victor. The question is: will he raise the heavy hand of Big Oil, or will he raise the hand and the spirits of the American people?”

“Once the tar sands is on the ground, in the water, and in the air, it's too late,” said Glen Hooks, senior campaign representative, Sierra Club. “Tar sands is more toxic, more corrosive, and proven nearly impossible to clean up. Americans pay for Canadian tar sands with our children's health, with the safety of our waterways, and with the security of our homes. It's much too high a price to pay.”

“The Keystone XL pipeline is a pipeline through the United States not to the United States.  It will put our land, water and climate at risk for the sake of Big Oil’s profits,” said Lorne Stockman, research director at Oil Change International. “It is not in America’s interest to let that happen.”

“The most disturbing failure of the impact statement is that it goes not analyze oil spill planning for Keystone XL specifically,” said Paul Blackburn, an attorney who authored a 64-page report showing a severe lack of oil spill response equipment in Nebraska. “We’ve been given only very generic information prepared by TransCanada’s consultant in Texas—the same group that planned the spill response for BP. A student writing a class report on how to respond to an oil spill might find it useful, but Nebraskans have no assurance that TransCanada is actually prepared for a spill.”

“TransCanada has a long history of rhetoric for theoretical quality of pipelines, as opposed to what they have built in the United States,” said Evan Vokes, a metallurgic engineer and TransCanada whistleblower. “TransCanada has not been honest about its construction quality problems that were and are relevant to this hearing.”

“TransCanada wants exclusive right across Nebraskans’ land forever,” said Brian Jorde, legal representative for Nebraska Easement Action Team. “Since forever is a fairly long time, we must fight for as many protections as possible—the abilities of farms and ranches to survive another generation depends on it!”

“We at Ihanktonwan affirm our recent 2013 Protect the Sacred Treaty that our laws affirm our solemn duty and responsibility to our ancestors, to ourselves, and to future generations to protect the land and waters of our homelands from tar sands intrusion which ultimately affects our climate negatively,” said Faith Spotted Eagle, counselor and founding grandmother of the Brave Heart Society. “It is unacceptable to create jobs that will harm the unborn. We will not relent in our time to stand firm to oppose Keystone XL.

“The Sandhills overlay the Ogallala Aquifer, the largest groundwater regional aquifer of its kind in the nation,” said John Hansen, president of the Nebraska Farmers Union. “It is not only the source for the majority of our state’s drinking water, it also supplies water for livestock. Running a potentially contaminating tar sands pipeline through our water supply is not only unnecessary, it is downright foolish.”

“The health implications of exposure to tar sand crude are greatly undocumented,” said Susan Connolly, impacted resident from Marshall, Michigan. “Those impacted by tar sand spills and communities in proposed pipelines are left with uncertainty and legitimate concerns. The refusal of state and federal agencies to study long-term exposure to tar sand crude such as the spill in Marshall, Michigan and the current spill in Mayflower, Arkansas validates why long term studies must be mandated.”

“Arkansas residents trusted Exxon when it said its tar sands pipeline was safe—instead, we got homes evacuated, wildlife killed, and months of cleanup ahead,” said David Carruth, central vice chair of the National Wildlife Federation board of directors. “Here in Nebraska, Grand Isle is one of the most important places in the world for Sandhill cranes, but Keystone XL would put those magnificent birds at risk for another disastrous spill. Nebraska can’t afford to make the same mistake.”