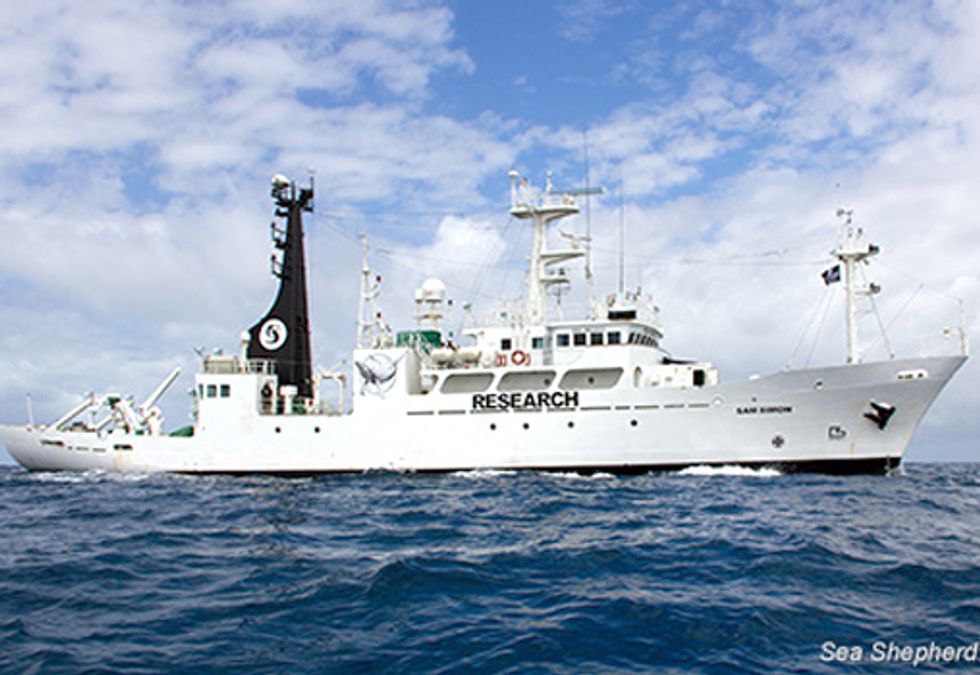 After months of speculation, anticipation and the announcement that Los Angeles-based philanthropist and co-creator of TV’s The Simpsons, Sam Simon, had donated funds for the purchase of a ship, Sea Shepherd's new Antarctic patrol ship, the SSS Sam Simon, was unveiled yesterday in the port of Hobart, Tasmania, docked at Macquarie Wharf 1.

Her 56-meter hull painted bright white with a classic Sea Shepherd Conservation Society logo on her sides, and displaying a large “S” on her tall black smokestack, the Sam Simon has clearly received several months of careful preparation prior to Sea Shepherd's most ambitious Antarctic campaign yet.

Registered in Melbourne, Australia, the Sam Simon carries a crew of 24 international volunteers, ready to brave the Southern Ocean to seek out and shut down the illegal Japanese whaling fleet.

The vessel, retired from service by the Japanese Government in 2010, has since been laid up in Shimonoseki, Japan, alongside the very ships Sea Shepherd will confront this season.

Originally built as Seifu Maru in 1993 by IHI shipyard in Tokyo, to a high standard with no expense spared by the Japanese Government, the ice-strengthened steel vessel was operated by the Maizuru Meteorogical Observatory, a department of the Japan Meteorological Agency, out of Kyoto Prefecture.

While Sea Shepherd and most of the world agrees that the word “research” has no place in the Institute of Cetacean Research’s (ICR's) whaling program, Seifu Maru was indeed responsible for a considerable amount of real ocean current data contributing to Japan's western North Pacific Whaling Program (JARPN).

Captain of the Sam Simon, Locky Maclean, stated: “After months of secrecy, it is such a great feeling to finally be able to fly the Sea Shepherd flag from the main mast, and yes, Sea Shepherd now owns a real Japanese research ship!”

With four vessels departing for the Southern Ocean Whale Sanctuary, Sea Shepherd's Operation Zero Tolerance aims to find the Japanese whaling fleet and chase it out of the Antarctic Treaty Zone without a single whale killed.  It is Sea Shepherd's most ambitious campaign, and the culmination of a decade's conservation work in the Antarctic, which has drastically reduced the amount of whales killed by Japan's ICR.

Japan's ICR has set itself a quota of nearly one thousand minke and 50 fin whales to be culled during the 2012/2013 Australian summer in Antarctica.

The Sam Simon will be open for public tours Friday, Saturday and Sunday in Hobart prior to departing for the Southern Ocean next week.