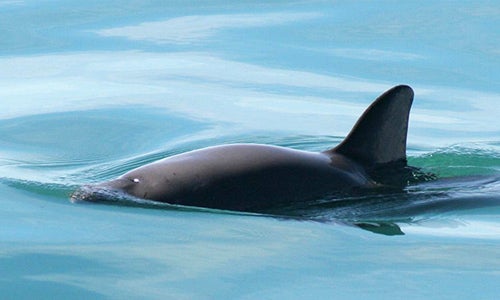 Last year, I wrote how Mexico’s plan for saving the vaquita, a small porpoise species found only in the northern part of the Gulf of California, was nothing more than a “roadmap for vaquita extinction.” Late last Friday, well after there was any chance for the story to be part of last week’s news cycle, the Mexican government issued a press release about its work to save the species. Buried far down in the release was the one number that tells you all you need to know about the status of the vaquita and the efficacy of Mexico’s efforts to save it. There are only about 60 vaquitas remaining, down from the 100 that were living a little less than two years ago. Mexico’s plan is not working.

Basically, about 40 percent of the vaquita population has disappeared at the same time that Mexico has been vigorously working to avert vaquita extinction. I’d hate to see what happens to a species on the brink that Mexico ignores.

Now, to be fair, other countries have a role to play and a responsibility to the vaquita. The U.S., for example, is a transit point for smuggling the fish (totoaba) that today is driving the vaquita’s demise. Gillnets set by poachers to feed Chinese demand for totoaba swim bladders catch more than fish. They also entangle vaquita, which drown in the gear.

As part of many totoaba smuggling routes, the U.S. must do more to crack down on such trafficking. And the U.S. has a responsibility to offer assistance to Mexico. The vaquita’s perilous condition is a direct result of the U.S. failing to implement a law that bans fish imports that do not meet U.S. standards for marine mammal protection. For years the U.S. knew that Mexico’s shrimp fishery in the upper Gulf of California was harming the vaquita in excess of U.S. standards. Yet, vaquita-killing shrimp continued to flow into the U.S. in violation of federal law.

There is still time for the vaquita to recover and thrive if Mexico produces the right conditions: all fishing must be banned in vaquita habitat; the ban must be scrupulously enforced; and Mexico must work closely with other countries to secure the resources necessary to enforce a ban and to crack down on illegal trafficking and markets.

It’s up to Mexico to decide if the vaquita will be on the path to recovery in a few years versus the road to extinction. I have no doubt Mexico can create the conditions necessary for vaquita recovery. It just has to choose that path.