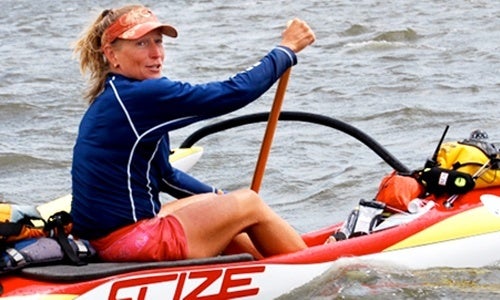 Margo Pellegrino, a self-identified and proud stay-at-home mother from New Jersey, is solo-paddling her outrigger canoe 2,000 miles from New York City to New Orleans in an effort to raise awareness of U.S. water pollution problems and the need for policies and public action to clean up our waterways.

Margo Pellegrino is solo-paddling her outrigger canoe 2,000 miles from New York City to New Orleans in an effort to raise awareness of U.S. water pollution problems.

“For the sake of my children and future generations, I felt I needed to help folks see that we are indeed impacting our ocean and fresh water by what we do within our respective watersheds,” Pellegrino said about why she embarked on this adventure. “I also want to show that there are a variety of organizations working to remedy these most pressing issues, so there is hope.”

Pellegrino said she has seen one too many polluted waterways to sit still. “Yes, it’s a kind of crazy thing to do to get folks thinking about and caring for our ocean and fresh water resources,” she said. “But when you consider what we are actually doing to these resources, maybe it isn’t.”

Our nation’s waterways are in trouble. Our waters are dealing with outbreaks of toxic algae slime due to agricultural pollution and runoff, extreme dumping of mining waste, dumping of toxic coal ash waste, mismanaged sewage systems that lead to harmful stormwater and sewage overflow into our rivers and lakes, and many other problems amid a changing climate, severe droughts and water shortages. 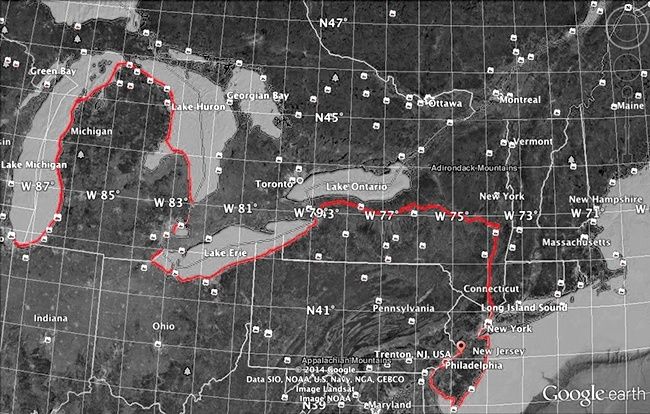 The mapped route for the first leg of Margo’s paddle.

Margo, in particular, will be highlighting the importance of the U.S. Environmental Protection Agency’s (EPA) proposed Clean Water Rule, which, if finalized, would restore long-standing Clean Water Act protections to streams and many wetlands across the country.

These protections, which stood for decades since Congress passed the Clean Water Act in 1972, were dismantled in the last decade. As a result, 59 percent of America’s streams and 20 million acres of wetlands were left vulnerable to toxic pollution.

Pellegrino is a team member of the Blue Frontier Campaign, a group of “seaweed rebels,” the ocean equivalent of grassroots organizers.

She is an adventurer, enduring the grueling conditions of long-distance solo paddling, such as severe weather, waterway currents, isolation and self-doubt. Margo has completed several long-distance paddles, from Miami to Maine, around the Gulf Coast and the West Coast along with a few smaller, more local jaunts to highlight ocean issues.

The first leg of this journey began at the end of May and took her through six states, from New York to Illinois, via the Hudson River, Erie Canal, Lake Erie, Lake Huron and Lake Michigan, to educate the public about watershed issues that impact our drinking water and waterways, and eventually harm our oceans.

At each stop along the way, Pellegrino will meet with and highlight the local groups working on these issues. “Keeping our rivers, lakes, bays, and ocean clean and healthy not only benefits our own individual health but also ensures that these economic drivers continue to contribute to a healthy tourism and recreational industry,” said Pellegrino. She is collecting water samples all along the way using HOPE2O test kits provided by Blue Ocean Sciences.