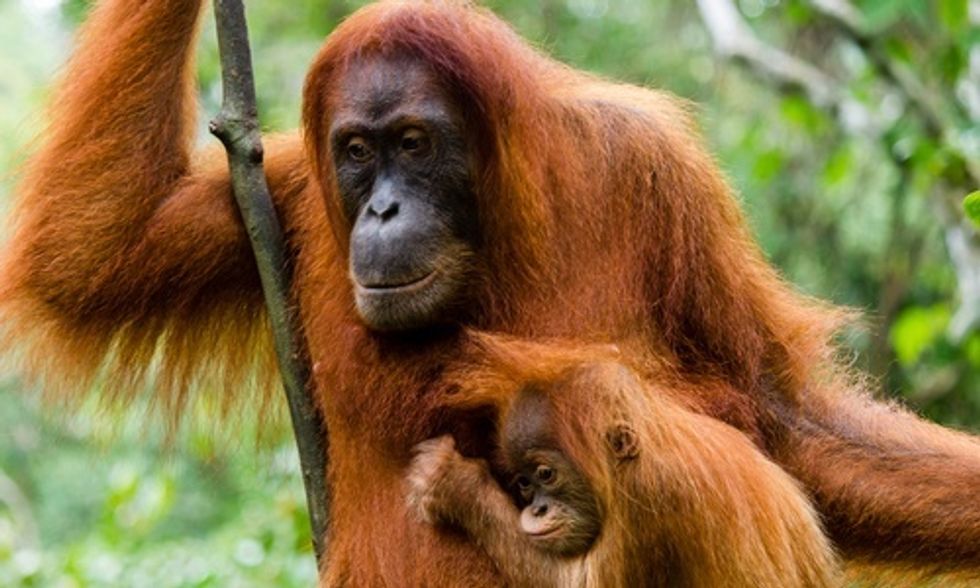 Despite some rainfall in the last few days, thousands of fires continue to burn on the main islands of Sumatra and Borneo. Unlike previous years, when fires mainly impacted agricultural land, these fires, fueled by a particularly dry season due to El Nino, have swept into national parks and primary forests, the last refuges for so many iconic endangered species, such as orangutans, rhinoceros and tigers.

All these animals hover on the brink of extinction and now the odds have been tipped even further against them. It is estimated that a third of the world’s orangutan population is under threat with many already dying and orphans flooding into rescue centers.

Data released last week by Guido van der Werf on the Global Fires Emissions Database estimate emissions generated every day from the fires exceeds that of the average daily emissions for the entire U.S. economy. The U.S economy is 20 times the size of Indonesia’s. Van der Werf estimates that over just 3 weeks of burning, the fires in Indonesia exceeded the entire annual CO2 emissions of Germany.

These are staggering statistics and illustrate just how critical it is that the world pays attention, supports the Indonesian government to enforce a fire moratorium, provides sophisticated fire fighting equipment, and holds palm oil corporations and companies using palm oil in their products to account over plantation practices.

These figures are even more disturbing because the fires are in peatlands. Not only are tropical peatlands significant carbon storage areas but when they burn they emit up to 10 times more methane than fires in non-peat lands. Nancy Harris and others, including the World Resources Institute, suggest that when the emissions from both the draining of peatlands for plantations and the fires are taken into account the methane released is 200 times more than that emitted from fires in any other land areas.

Orangutan running from the fire.

This is not only an environmental disaster of massive proportions but also a humanitarian one which will have long-term economic repercussions for Indonesia. Estimates put the number of people affected by respiratory illness at 500 million across Indonesia, Singapore and Malaysia.

So why is there so little press coverage or interest from the rest of the world in this catastrophe? Is it because it is man-made, driven by the palm oil and pulp and paper corporations as well as poachers and small farmers? Do we some how think this is not as news worthy as a hurricane or earthquake?

A mother and baby orangutan in the jungles of Indonesia.
Photo credit: Shutterstock

While it may seem like this is a problem on the other side of the world we are all, as consumers, complicit in this crime. The supply chain is not always obvious and lack of product labelling often means we have no idea that our shampoo or crackers or toilet paper have such a devastating effect. If there is going to be any chance to save the rapidly disappearing mega fauna on our planet and to limit the damage from global warming then we have to start thinking that a problem over there is also a problem over here.

Marie Gale is a conservationist with Save Indonesian Endangered Species Fund an NGO actively engaged in reforestation and wildlife conservation in Sumatra and Borneo.