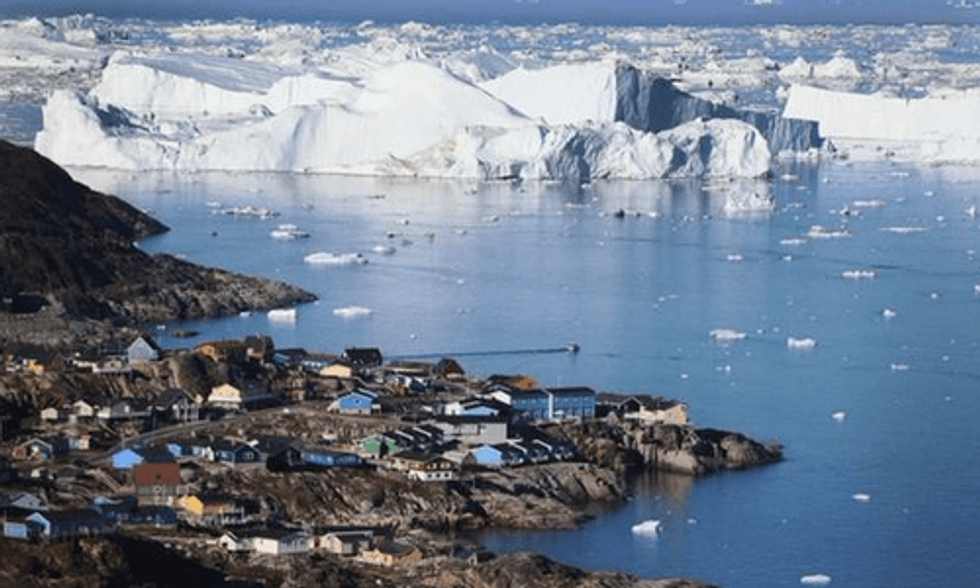 With the world's glaciers melting at record rates, the Jakobshavn—Greenland's fastest-moving glacier and one of the fastest melting in the world—may have lost its largest chunk of ice in recorded history.

The Washington Post reported that members of the Arctic Sea Ice Forum examined satellite images of the glacier between Aug. 14 and Aug. 16 and found that a large chunk of ice (an estimated total area of of 12.5 square kilometers or five square miles), had broken away from the glacier's face. The amount is quite possibly the largest ever recorded, some members have speculated.

According to forum member Espen Olsen, this loss is "one of the largest calvings in many years, if not the largest." (Calving is the sudden release and breaking away of a mass of ice from a glacier, iceberg, ice front, ice shelf or crevasse).

As the Post noted in its report, calving isn't unusual for this area in Greenland due to rising air and sea temperatures in the Arctic. "As of 2012, the glacier was pouring out ice at a speed of 150 feet per day, nearly three times its flow rate in the 1990s," the report stated.

One of the world's fastest melting glaciers may have just lost its biggest ice chunk on record http://t.co/Y0CnIXwDYL pic.twitter.com/i8WbaBaIm1

“Overall, I don’t think that they really can nail the ‘largest’ [calving event] or not,” he wrote in an email to the publication. “I wouldn’t get too excited on this, even though it is not good news.” He added that the satellite images the forum members observed were only spaced by one full day and the ice loss could have broken off in separate smaller events instead of one giant calving.

Even if this event isn't the largest ice loss recorded on the glacier, as you can see from these satellite images captured on July 31 and Aug. 16 of this year (just two weeks apart!) by Joshua Stevens, a senior data visualizer and cartographer at NASA's Earth Observatory, the Jakobshavn is going through tremendous ice loss.

“The calving events of Jakobshavn are becoming more spectacular with time, and I am in awe with the calving speed and retreat rate of this glacier,” said Eric Rignot, a glaciologist at the Jet Propulsion Laboratory, in a NASA Earth Observatory post. “These images are a very good example of the changes taking place in Greenland.”

“What is important is that the ice front, or calving front, keeps retreating inland at galloping speeds,” Rignot said.

The Jakobshavn is of particular significance since it is responsible "for draining a large portion of the Greenland Ice Sheet," and "could contribute more to sea level rise than any other single feature in the Northern Hemisphere," the Earth Observatory post stated.

According to University of Washington glaciologist Ian Joughin, Jakobshavn’s calving front has moved about 600 meters (2,000 feet) farther inland than the summer before for the last several years.

The Jakobshavn is also one of the fastest-flowing glaciers in the world. In the summer of 2012 alone, the glacier accelerated at a rate of 17 kilometers (10 miles) per year, a speed never witnessed before. On average, the glacier moved nearly three times faster in 2012 than it did in the mid-1990s.

Worldwide, the current rate of glacier melt is without precedent. Recent data compiled by the World Glacier Monitoring Service (WGMS) show that several hundred glaciers are losing between half and one meter of thickness every year—at least twice the average loss for the 20th century—and remote monitoring shows this rate of melting is far more widespread.