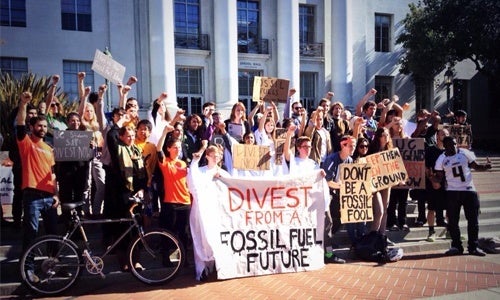 Yielding to pressure from campaigners across the state who spent years pushing the University of California (UC) to divest its holdings from fossil fuels, the university system’s chief investment officer announced yesterday that the $91 billion fund would begin by pulling all direct investments out of coal and tar sands mining companies. Those investments, totaling $200 million, have already been removed.

“This is a hard-fought victory for students and our allies from across California who have been demanding that UC truly live up to its big talk on climate change,” added Jake Soiffer, an undergraduate student at UC Berkeley and leader with Fossil Free UC.

Divestment activists welcomed the UC decision as an important first step resulting from years of campaign work by students and advocates, but pledged to keep working until administrators make a commitment to divest from all fossil fuels.

“This is a major milestone for the divestment campaign that should help unleash a wave of new commitments,” said 350.org Executive Director May Boeve. “The UC’s helped lead the effort to divest from apartheid-era South Africa, so we’re glad to see them beginning to divest from fossil fuels as well. The next step is to finish what they’ve begun and pull money out of harmful oil and gas companies too. Yesterday’s news that Big Oil successfully gutted a key part of California’s new climate bill is a powerful reminder that taking on coal and tar sands isn’t enough. We need our institutions to divest from Big Oil and gas as well to have any chance of breaking their political power and solving the climate crisis. Students and campaigners know that and they won’t rest until the UC’s fully divest from fossil fuels.”

The University of California is one of the largest university systems in the world, overseeing 10 campuses across the state. Its Board of Regents manages a system-wide fund of approximately $91 billion. By comparison, Harvard University’s endowment stands at $33 billion.

“This is a big deal and an important first step that takes $200 million away from companies like Peabody—but we need our schools to take a stance against Exxon and Shell too. They’re every bit as responsible for the climate crisis,” said Alden Phinney, a UC Santa Cruz student and Fossil Free UC activist.

The move is sure to create momentum for the “Divest for Paris” initiative, an effort to encourage individuals and institutions to divest ahead of this December’s UN Climate Talks. The week of September 21, 350.org and Divest-Invest will be making a major announcement in New York City, releasing the latest tally of total divestment commitments from around the world.

At a meeting of the University of California Board of Regents’ Committee on Investments yesterday afternoon, Chief Investment Officer Jagdeep Singh Bachhner said:

“So for us, this is not just about here’s a set of beliefs and a set of values, we are going to be live & transparent about it on our website, we’ve gone one step further as part of our house keeping and managing risks over the course of the year and selling our direct holdings, to reiterate, in coal mining companies, oil sands focused companies…”