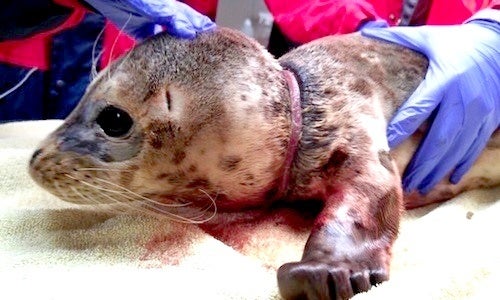 A seal pup named Maëlle was released back into the ocean Tuesday, three months after being found severely underweight and injured by a fishing net wrapped deep around her neck.

The female seal, thought to be only five- or six-months-old at the time, was found in December on a beach near the city of Nanaimo in British Columbia, Canada. 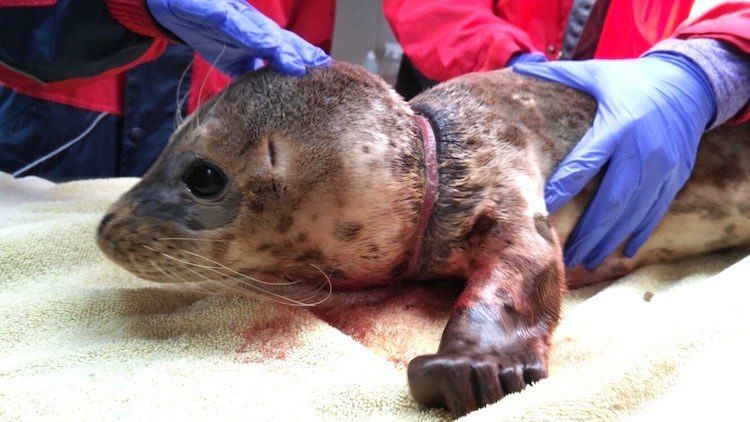 Marine debris can cause serious harm to aquatic life, such as this young female seal named Maëlle who was found with fish net embedded in her neck. Photo credit: Vancouver Aquarium

After rescuers untangled her from the netting, Maëlle was transported to the Vancouver Aquarium’s Marine Mammal Rescue Centre for rehabilitation.

According to a blog post from the aquarium, the pup only weighed 9 kilograms when she was brought to the center.

“She was really underweight, so [the net] had probably been around her neck for what we’re guessing was about a month’s time,” Lindsaye Akhurst, manager of the aquarium’s rescue center, told CBC News. “She weighed half the amount of the weight that she should’ve.”

Akhurst noted that injuries like Maëlle’s are concerning because they’re entirely due to human activity, adding that the aquarium rescues about 150 animals in similar circumstances every year. 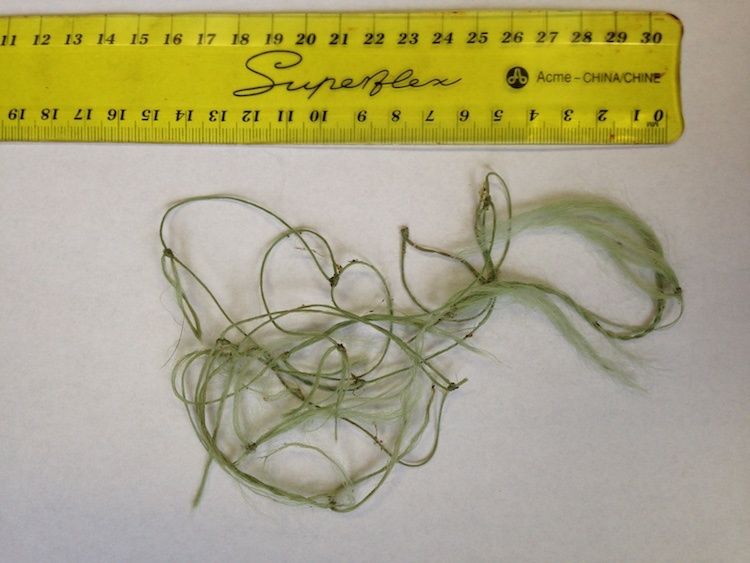 Maëlle was put on a feeding program to help her gain weight and given antibiotics and fluids to help her heal.

The pup, who is named after Canadian snowboarder and 2010 Olympic gold medalist Maëlle Ricker, managed a full recovery and was released into Cates Park in North Vancouver March 8 with her namesake athlete also in attendance.

“It’s an enormous honor to be invited to witness the release of the now-healthy seal pup that is named after me,” Ricker said in the aquarium’s blog post. “I’m grateful for the opportunity to help raise awareness about the importance of cleaning up our Canadian shorelines to help protect aquatic ecosystems and wild animals like Maëlle.”

Akhurst told 24 Hours Vancouver that the seal “didn’t even bat an eyelash” as she swam away into the North Vancouver sea.

“Her being an older animal when she came in, it’s nice that she’s doing so well, so fast,” Akhurst said.

Maëlle’s story is another reminder of the destruction caused by human litter which can choke, injure and even kill aquatic life as small as the tinniest fish to the largest whales. According to the aquarium, pinnipeds—seals and sea lions—are particularly susceptible to marine debris because of their curious nature.

An estimated 640,000 tonnes of ghost gear, which includes nets, lines and traps are lost, abandoned or discarded in our oceans every year. Added to that, at least 8 million tons of plastics leak into the ocean annually, meaning there will be more plastic than fish in the ocean by 2050.

We can all do something to help reduce marine litter, from lifestyle changes to participating in beach cleanups. Last year alone, the Great Canadian Shoreline Cleanups kept more than 175,932 kilograms of litter from reaching the oceans, lakes, rivers, streams and other water systems.

“This seal pup is one of the few lucky ones—the trash humans leave behind often has fatal consequences for wildlife in all our waters,” Kate Le Souef, manager of the Great Canadian Shoreline Cleanup, said.