On the Trail of the Odd and Elusive Platypus 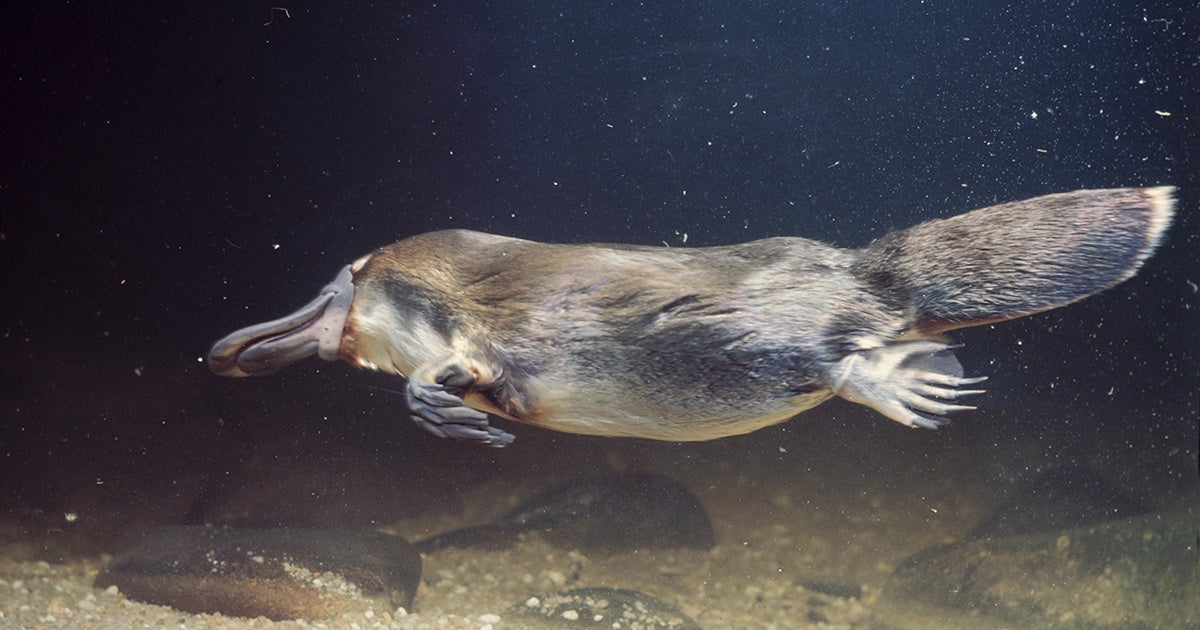 We don’t know much about platypuses, but what we do know is pretty fascinating.

They are mammals—despite the fact that they are venomous, lay eggs and lack nipples. They have webbed feet like otters, leathery tails like beavers, and broad bills on their faces like ducks. The females have two ovaries, but only one of them is worth a damn. If you were to stick a thermometer in the animal’s tukhus—which is pretty different from yours or mine or those of our other furry relatives because it’s a cloaca (basically, one hole does it all)—you’d find that platypuses run at a relatively chilly baseline of just 90 degrees Fahrenheit. And remarkably, these monotremes (Greek for “single hole”), when hunting underwater, they cinch up their eyes, ears, and nose and navigate entirely by detecting the tiny twinges of electricity given off by the muscle contractions of their prey, mostly crustaceans.

A more bizarre mammal you will not find.

And yet, for all the curiosity surrounding these chimerical creatures, which have been swimming eastern Australia’s rivers for tens of millions of years, scientists have no idea how many duck-billed platypuses are out there, how many there used to be, or how long they might continue to be at all.

“Are there half as many as there were? A tenth of what there were?” asked Josh Griffiths, a wildlife ecologist with the Centre for Environmental Stress and Adaptation Research in Victoria, Australia. “I mean, they could have increased for all we know.” Even so, the International Union for Conservation of Nature decided in 2016 to classify the species as near threatened due to challenges such as habitat loss and degradation.

“The listing was a step forward. It took into account all the information we had, but that was fairly limited,” said Griffiths. “But I think anyone who has worked with platypuses for any length of time would probably think that’s an underestimate.”

The problem with quantifying platypuses comes down to one simple fact: They’re sneaky little buggers. Duck-bills spend nearly all of their time in waterways hunting for shrimp, crayfish, and other invertebrates. Even when they do come up for air, their low profiles at the water’s surface are so cryptic that even trained observers have a tough time determining what they’re actually looking at. These clever animals are also tough to trap. And once they’ve been caught and released, they seem particularly adept at avoiding a repeat of the experience—making mark and recapture studies difficult. Finally, platypuses live mostly solitary lives, so even under natural conditions their population densities are low. 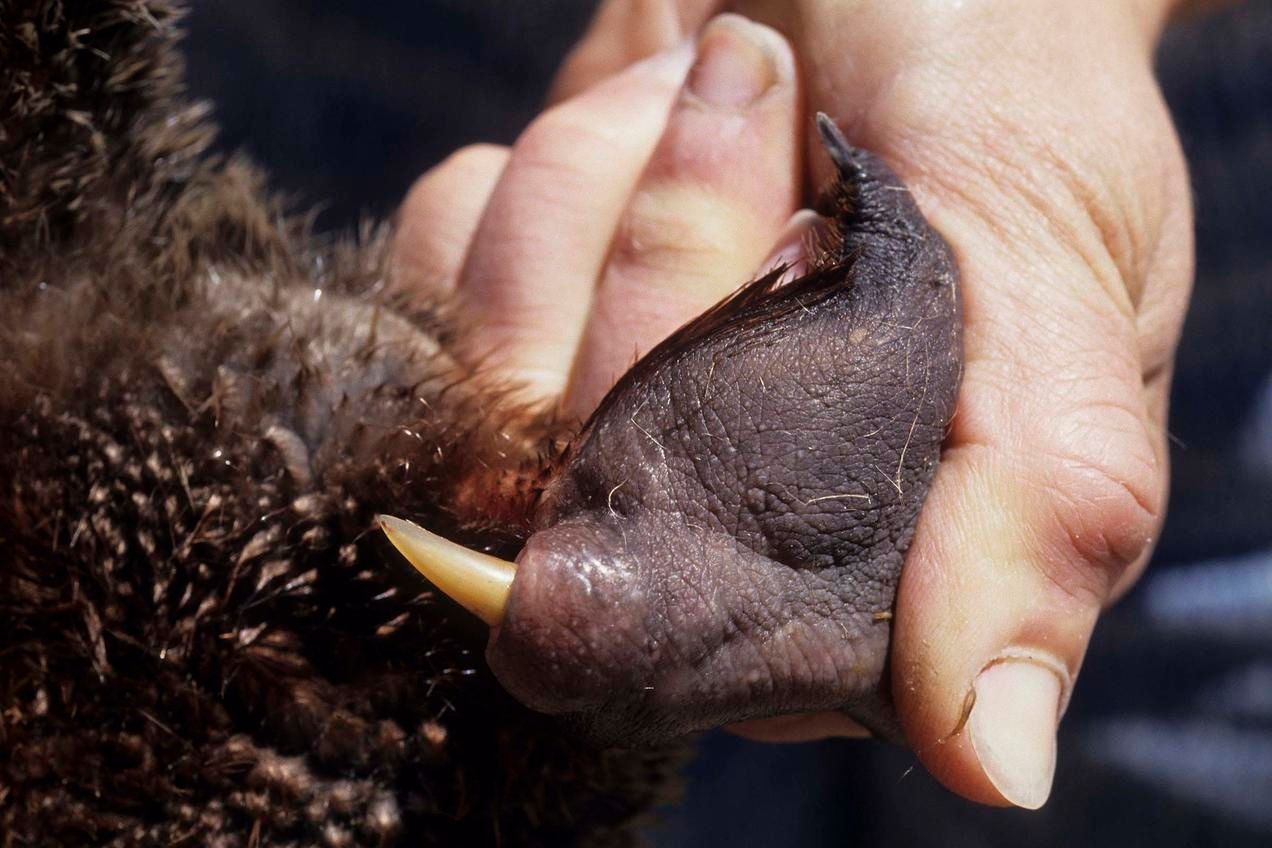 A closeup of a platypus’s venomous spur.

But Griffiths and partners at the San Diego Zoo and the University of Melbourne are up for this monotreme challenge. They’re working to complete the largest survey of platypuses ever—and they’re doing it by collecting environmental DNA or eDNA. With this cutting-edge technique, the researchers basically scoop up water samples from a river, pond, or even an ocean in order to detect infinitesimally small bits of DNA sloughed off by the plants and animals that live there. The eDNA won’t necessarily tell us how many platypuses live in a given waterway, says Griffiths, but it can quickly and affordably indicate whether they are there at all.

The study is in its first of three years, and the hope is that the results will convince the Australian government and the managers of platy-positive waterways to help these furry, nipple-less egg layers where they still exist. (Local Australians can assist in the search, too, by logging platypus sightings into the smartphone app, platypusSPOT.)

Platypuses may be odd, but the threats they face are all too familiar. Because they spend nearly their whole lives in streams, lakes, and ponds, they are susceptible to drought, obstructions to water flow such as dams and culverts (similar to the Chinese sturgeon and Pacific lamprey), and other developments that degrade their natural habitat.

The sheer number of small farms with dams in Australia that withdraw water from tributaries, Griffiths said, is enough to drastically alter “flow regimes,” or the amount and speed at which water flows, in larger waterways. This fundamentally changes the platypus’s environment. A river or stream that no longer flows at full capacity turns into a series of pools connected by shallow channels, “and that just isn’t conducive to supporting a healthy platypus population,” said Griffiths.

Furthermore, the clearing of brush and vegetation along riverbanks that can happen with farming, ranching, and other land use can cause erosion when the root systems that hold dirt in place are yanked out. Platypuses make their burrows in these banks, often behind clumps of roots that serve as front doors of sorts. Erosion also sends more sediment into the water, which can smother insects that the platypuses and their prey depend on for food. Loss of trees also means there is less woody debris for the litter critters to feed on. All these alterations add up to a very different ecosystem—and not one evolution has equipped the platypus for.

A recent study revealed another insidious threat to platypuses: pharmaceuticals. Platypuses are considered by the researchers to be apex predators, making them more susceptible to pollutants that have accumulated in the bodies of animals farther down the food chain. These include painkillers, antidepressants, and antibiotics that find their way into waterways via sewage systems, septic tanks, and runoff. In fact, the researchers estimate that in some cases, a platypus in a contaminated stream might ingest half a human dose of antidepressants every single day.

Nets and traps intended for other animals also kill hundreds of platypuses each year. Fishing for a large crayfish called the yabby (with “opera house nets,” named for their likeness to Sydney’s famous venue) has proved to be particularly lethal. While Griffiths and other conservationists were able to get the nets banned in the state of Victoria last May, they remain legal elsewhere.

How much each of these threats is hurting the platypus’s chance to remain on the planet for another 50 million years or so is unknown, which is why eDNA analysis is a crucial first step in the conservation of these swift and savvy little duck-faced animals.

Another necessary step is freeing up their waterways. People can replant bankside vegetation and cut down on yabby trapping, said Griffiths, but if the streams stop flowing, such efforts won’t make much difference. This fact about the platypus may not be as fun, but it’s one we have to learn.