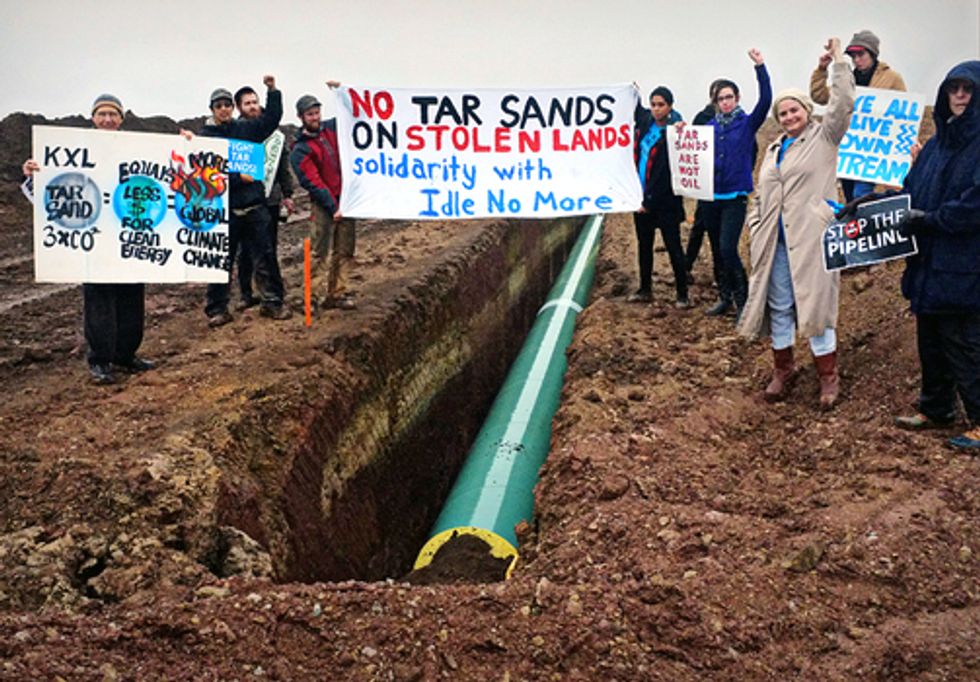 Oklahomans from across the state, and indigenous and environmental activists came together and walked onto an easement where pipe for the Keystone XL tar sands pipeline was being laid through Sac & Fox land. In solidarity with the international Idle No More movement, the Unis’tot’en Camp, impacted communities throughout the pipeline route and an Oklahoma branch of Tar Sands Blockade have come together to take nonviolent action against the dangerous pipeline and demand that tribal sovereignty, native burial lands and property rights be respected by TransCanada.

The action took place in Stroud, OK, where the group walked onto a TransCanada easement and marched along segments of buried and unburied pipe, participating in round-dances along the way. The demonstration was intended as a small act of civil disobedience to inaugurate a sustained campaign of direct action being launched by a diverse coalition intent on stopping the construction of the Keystone XL in Oklahoma.

The pipeline, a $7 billion project by the multinational TransCanada Corporation, is slated to transport diluted bitumen, or “dilbit,” from Alberta, Canada to the Texas Gulf Coast. Dilbit is much different from regular crude oil in that it has to be heated, pressurized and mixed with undisclosed, corrosive chemicals to be transported. As a result, TransCanada’s first tar sands pipeline, the Keystone I, has leaked more than a dozen times. Ongoing tar sands extraction is destroying portion of the Boreal forest in Northern Alberta the size of New York State, and there is proposed tar sands exploration in Utah and Colorado.

“They lied to us about what’s going to be pumped through this pipe. They have strong-armed Oklahomans and Texans into signing contracts. Our rivers, especially the North and South Canadian that feed into Lake Eufaula, our drinking water aquifers and our native lands are at risk, and they simply do not care,” said Earl Hatley, Grand Riverkeeper in Oklahoma.

Tar Sands extraction and transportation have been met with resistance at every turn. Large coalitions of environmental groups and concerned citizens challenged the project in 2011, causing President Obama to reject the permit for the northern portion. Construction of the Gulf Coast segment, from Cushing, OK to the Texas Gulf Coast was not only permitted but expedited—indicating that Oklahoma, Texas and the Gulf Coast as a whole are considered a sacrifice zone for this for-profit, for-export, toxic pipeline.

Tar Sands Blockade, a broad-based group of impacted community members and environmental activists, has challenged the construction at every phase, including the establishment of a long-term tree blockade and several blockades and direct actions.

Indigenous groups throughout North America have also resisted tar sands extraction and transportation. Not only do native communities face disproportionate risk from the pipeline, but the Keystone XL is in violation of treaty rights throughout its route.