Oklahoma Has Always Been Native Land 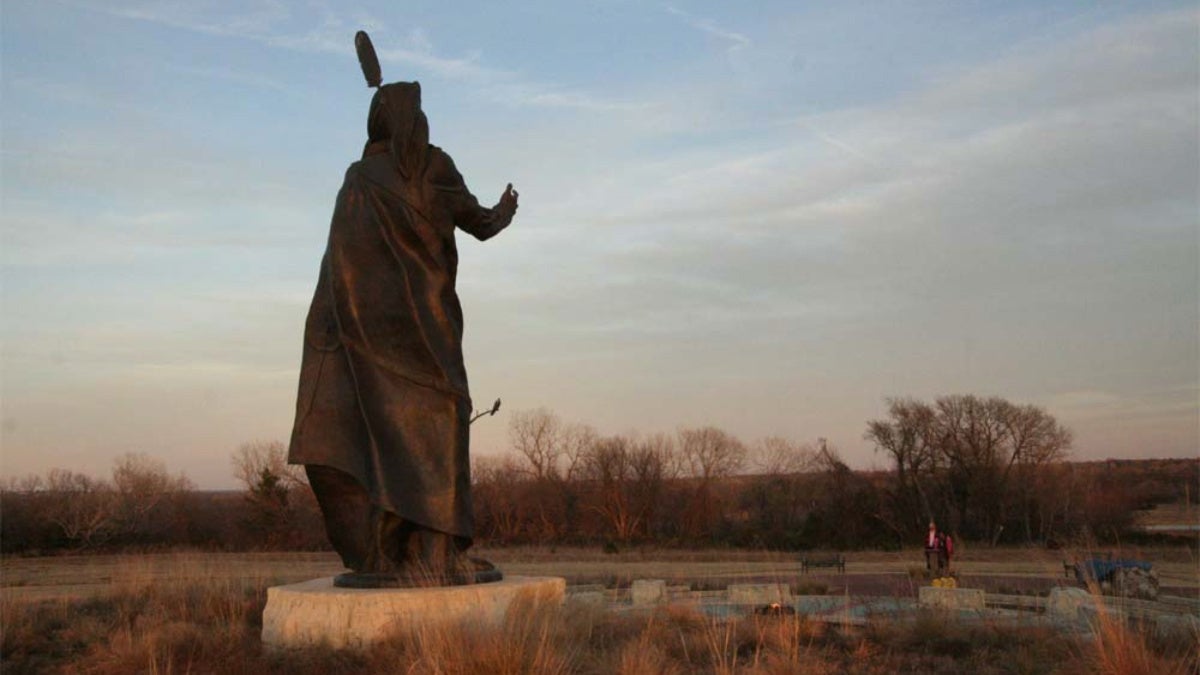 Indian Territory, which occupied all Oklahoma minus the panhandle, was almost 44 million acres of fertile rolling prairies, rivers and groves of enormous trees. Hugh Pickens / Wikimedia Commons / CC by 3.0

Some Oklahomans are expressing trepidation about the Supreme Court’s recent ruling that much of the eastern part of the state belongs to the Muscogee (Creek) Nation. They wonder whether they must now pay taxes to or be governed by the Muscogee.

In alarmist language, Sen. Ted Cruz of neighboring Texas tweeted that the Supreme Court “just gave away half of Oklahoma, literally. Manhattan is next.”

In fact, the landmark July 9 decision applies only to criminal law. It gives federal and tribal courts jurisdiction over felonies committed by tribal citizens within the Creek reservation, not the state of Oklahoma.

Any shock that tribal nations have sovereignty over their own land reflects a serious misunderstanding of American history. For Oklahoma – indeed, all of North America – has always been, for lack of a better term, Indian Country.

As both an educator and scholar, I work to correct the erasure of Indigenous histories through my research and teaching.

North America was not a vast, unpopulated wilderness when white colonizers arrived in 1620. Up to 100 million people of more than 1,000 sovereign Indigenous nations occupied the area that would become the United States. At the time, fewer than 80 million people lived in Europe.

Historically, Indigenous nations emphasized equity, consensus and community. Though individualism would come to define the United States, my research finds that Native Americans retain these values today, along with our guiding principles of respect, responsibility and reciprocity. 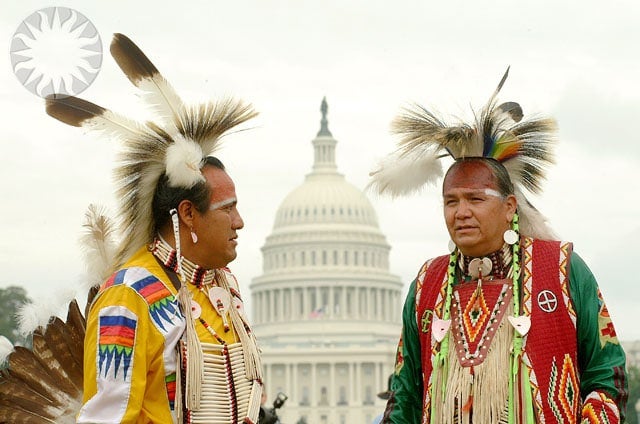 The US has violated every treaty it has made with Indian Tribes. Public.Resource.Org

European and American colonizers did not hold these same values. From 1492 to 1900, they pushed inexorably westward across the North American continent, burning Native villages, destroying crops, committing sexual assaults, enslaving people and perpetrating massacres. The government did not punish these atrocities against Indigenous Nations and their citizens.

Citing the so-called “Doctrine of Discovery” and Manifest Destiny, U.S. policymakers argued that the federal government had a divine duty to fully develop the region. Racist in language and logic, they contended that “Indians” did not know how to work or to care for the land because they were inferior to whites.

Oklahoma was born of this institutionalized racism.

Under the Indian Removal Act of 1830, the Cherokee, Chickasaw, Choctaw, Creek and Seminole nations – known as the Five Tribes – were forced from their ancestral homelands in the southeast and relocated to “Indian Territory,” as Oklahoma was then designated. Half of the Muscogee and Cherokee populations died from brutal and inhumane treatment as they were forcibly marched 2,200 miles across nine states to their new homelands in what most Americans call the Trail of Tears.

Indian Territory, which occupied all Oklahoma minus the panhandle, was almost 44 million acres of fertile rolling prairies, rivers and groves of enormous trees. Several Indian nations already lived in the area, including the Apache, Arapaho, Comanche, Kiowa, Osage and Wichita.

Legally, Indian Territory was to belong to the tribal nations forever, and trespass by settlers was forbidden. But over the next two centuries, Congress would violate every one of the 375 treaties it made with Indian tribes as well as numerous statutory acts, according the United States Commission on Civil Rights.

By 1890, only about 25 million acres of Indian Territory remained. The Muscogee lost nearly half their lands in an 1866 Reconstruction-era treaty. And in 1889, almost 2 million acres in western Oklahoma were redesignated as “Unassigned Lands” and opened to “white settlement.” By 1890, the U.S. Census showed that only 28% of people in Indian Territory were actually “Indian.”

With statehood in 1907, Oklahoma assumed jurisdiction over all its territory, ultimately denying that the Muscogee had ever had a reservation there. That is the historic injustice corrected by the Supreme Court on July 9. 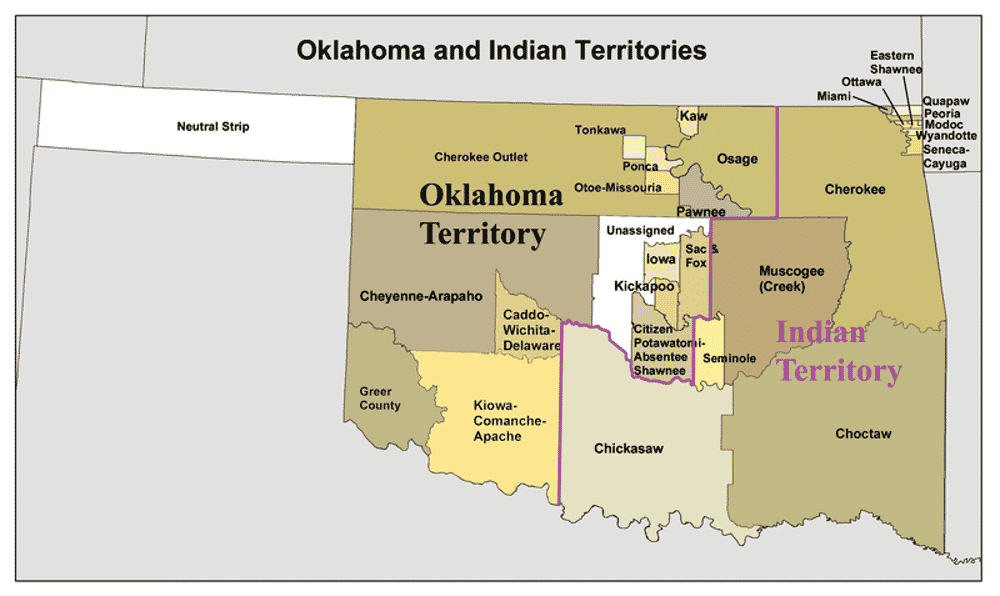 Eastern Oklahoma was granted by Congress to Native tribes in the 19th century. Kmusser / Wikimedia Commons, CC BY 4.0

Despite all the brutality and broken promises, the Five Tribes have contributed socially, culturally and economically to Oklahoma far beyond the shrinking bounds of their territories, in ways that benefit all residents.

The public school system created by the Choctaws shortly after their arrival became the model for Oklahoma schools that exists today. Last year, Oklahoma tribes contributed over US0 million to Oklahoma public schools.

Oklahoma tribes also enrich Oklahoma’s economy, employing over 96,000 people – most of them non-Native – and attracting tourists with their cultural events. In 2017, Oklahoma tribes produced almost billion in goods and services and paid out .6 billion in wages and benefits. 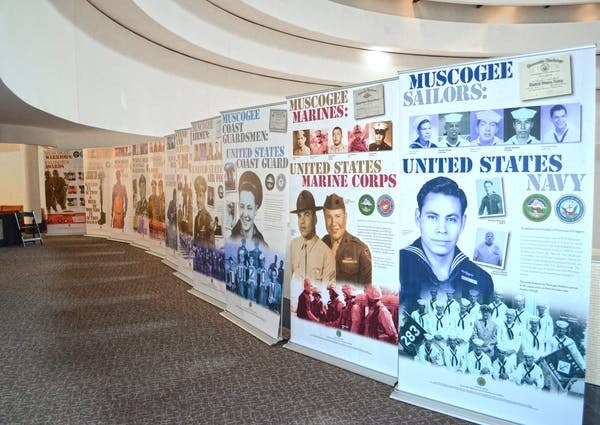 A 2012 exhibition on Muscogee achievement at the Smithsonian Institute’s National Museum of the American Indian. Tim Evanson / flickr, CC BY 4.0

Citizens of the Five Tribes have also contributed to broader American society.

Before the Navajo Code Talkers of World War II, the Choctaw Code Talkers used their language as code for the United States in World War I. Lt. Col Ernest Childers, a Muscogee, won the Medal of Honor for his service in World War II. U.S. Poet Laureate Joy Harjo, also a Muscogee, is the first Indigenous poet laureate. Mary Ross, a Cherokee, was the first known Indigenous woman engineer. And John Herrington, Chickasaw, was a NASA astronaut. These are but a few examples.

The strong collaborative leadership of the Muscogee (Creek) Nation was apparent after the Supreme Court’s ruling in Principal Chief David Hill’s official response.

“Today’s decision will allow the Nation to honor our ancestors by maintaining our established sovereignty and territorial boundaries,” Hill said, adding: “We will continue to work with federal and state law enforcement agencies to ensure that public safety will be maintained.”


Disclosure statement: Dwanna L. McKay does not work for, consult, own shares in or receive funding from any company or organization that would benefit from this article, and has disclosed no relevant affiliations beyond their academic appointment.