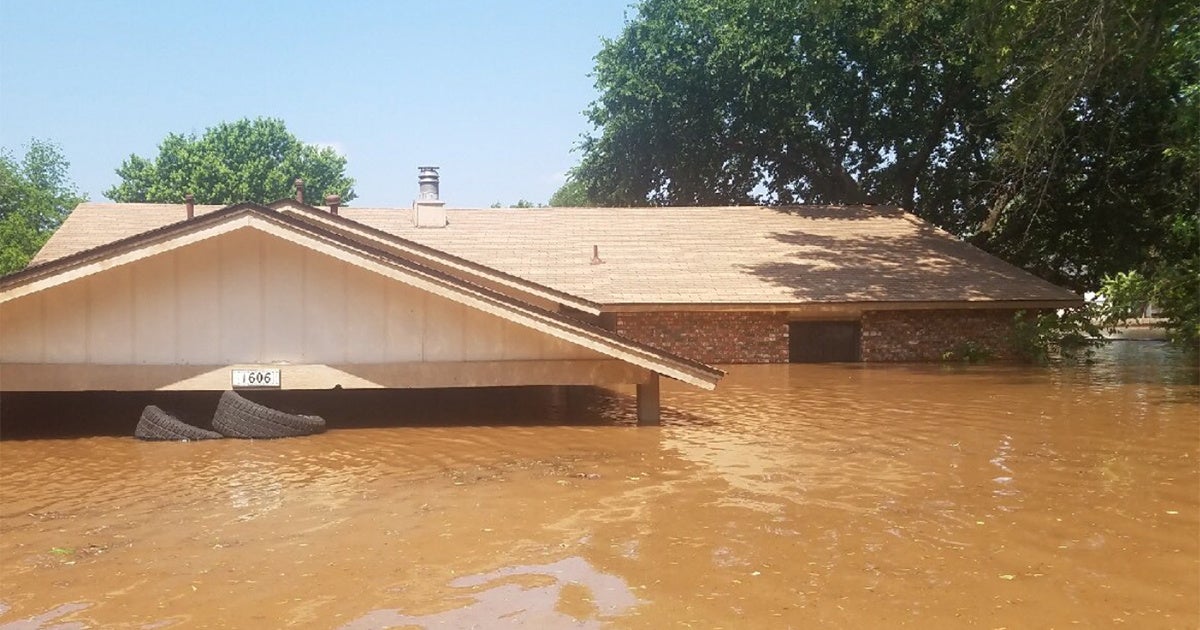 This has been a historically wet spring for the South and Central U.S.

Authorities in Tulsa, Oklahoma are hoping 70-year-old levees will hold, according to Axios, and every county in the state has declared an emergency over flooding, CNN reported Tuesday. As many as six people have died in the state over the past few days because of extreme weather, including floods and tornadoes.

“We still have water still rising in the east,” Oklahoma Gov. Kevin Stitt said Monday. “We are not out of the woods yet.”

Here’s a look at the flooding we are seeing as we patrol by boat in the Town and Country Neighborhood today. This is just off Town and Country Drive, near West 18th Place South and South 152nd W Ave. pic.twitter.com/PWMB9a7WvM

Thunderstorms are predicted through Tuesday night from Iowa to Oklahoma and then again Wednesday and Wednesday night from Texas into Oklahoma, Arkansas and Missouri, The Weather Channel reported. This could threaten new flash floods and add to existing flooding.

The Army Corps of Engineers increased the water flow from the Keystone Dam in Oklahoma to 275,000 cubic feet per second to try and prevent water from overflowing the spillway, The New York Times reported. Tulsa Mayor G.T. Bynum said authorities were monitoring water levels.

“We are planning for and preparing for the flood of record, and we think everybody along the Arkansas River corridor ought to be doing the same,” Bynum told reporters Tuesday, according to The New York Times. “While it’s high risk, there is not an emergency behind the levees right now. It’s a high-risk situation when you’re talking about infrastructure that’s being tested in such a strong way.”

Meanwhile, flood waters have turned the town of Braggs, Oklahoma into an island since late last week, and residents have organized boat runs for gas, medicine and food for livestock and people.

Record flooding is also expected in Ozark, Dardanelle, Morrilton and Toad Suck Reservoir, Arkansas this week, and could top levees in Conway and Faulkner Counties, The Weather Channel said Tuesday.

Here is an update including the latest river levels along the Arkansas River as of early this evening. The next forecast update will be out later this evening. So, check back in to see in any changes are noted to the expected crests then. #arwx #ARflood19 pic.twitter.com/SGbwWShfo9

Locations from Oklahoma to Missouri have seen as much as 10 inches of rain this month, and many places could break rainfall records both for May and for any month, as The Weather Channel outlined:

Almost 15 inches of rain soaked Bartlesville, Oklahoma, nearly tripling its average May rain, crushing its previous May record of a mere 10.31 inches in 2000 and threatening the city’s single wettest month record of 16 inches in June 1957.

But the wet weather has lasted longer than a month in many places. Since early 2019, most of the lower Ohio and Mississippi River Valleys have seen more than two feet of rain, USA Today reported. In several locations, the Mississippi has either broken or matched its 1927 records for the longest time at flood stage.

The Great Flood of 1927 killed hundreds, displaced around 750,000 people and led to the existing system of flood controls managed by the Army Corps of Engineers.

Today’s historic flood and precipitation levels are associated with climate change. Warmer air holds more moisture, and extreme precipitation events have increased in frequency and intensity across most of the U.S., according to the National Climate Assessment. Since 1991, that increase has been most extreme in the Northeast, Midwest and Upper Great Plains, and has led to an increase in flooding in the Northeast and Midwest. In the Southern Great Plains, the overall frequency of flooding has decreased in the last 30 years, but the number of record-breaking floods has increased. The frequency and intensity of heavy rains are also expected to increase in the region, especially if nothing is done to reduce greenhouse gas emissions, the National Climate Assessment concluded.