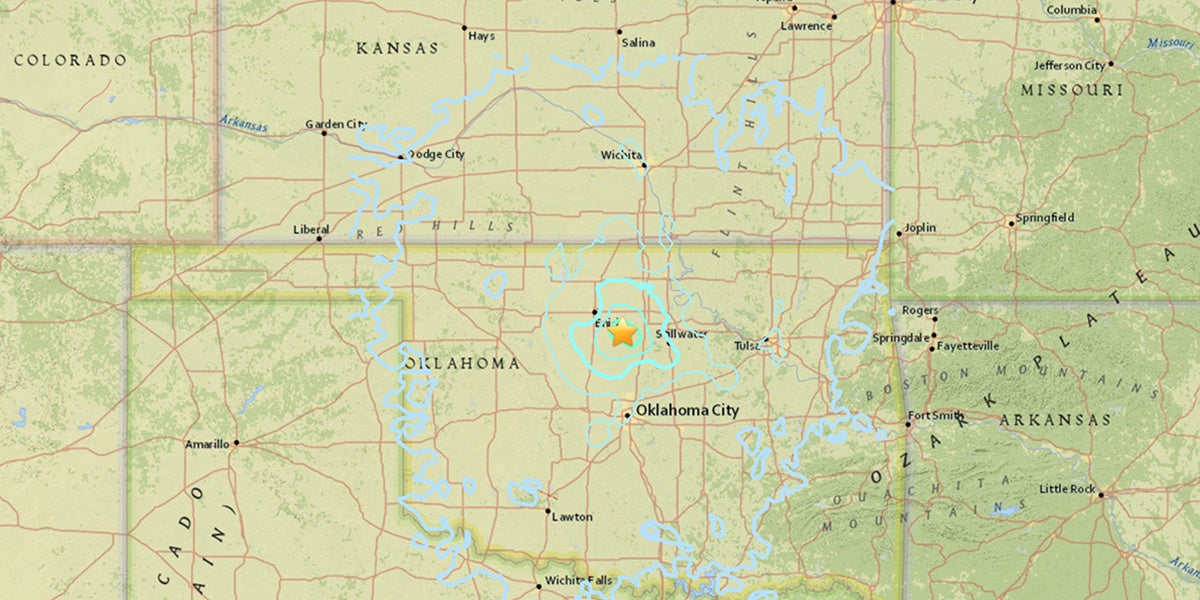 A 4.3 magnitude
earthquake that rattled Northern Oklahoma early Monday morning was
the fourth temblor to strike the region in the past 24 hours.

In fact, a
dozen-plus earthquakes, ranging from magnitudes of 2.5 to 4.6, have been recorded in the Sooner State since Friday, according to the U.S. Geological Survey.

There have been 8 earthquakes with magnitudes ranging from 2.5 to 4.6 between Perry and Covington in northern Oklahoma in the past 24 hours. The latest, having a preliminary magnitude of 4.6, occurred at 7:16 CDT this morning. #okquake https://t.co/JwfpIrHgSb pic.twitter.com/UbqUwya6jX

The U.S. Geological Survey recorded the latest quake at 5:22 a.m. local time near the city of Perry, Oklahoma. It’s among the largest in the state so far this year and it woke people up as far away as Kansas City, according to the area’s National Weather Service.

The 4.3 came less than an hour after a magnitude 3.3 (highlighted in blue below) struck in the same vicinity.

The threshold for damage starts around 4.0. A tremor at that magnitude
feels like a heavy truck striking a building.

Mike Honigsberg, the emergency management director for the city of Enid and Garfield County, said there are no immediate reports of injury and he is asking residents to
submit damage reports to him.

The alarming flurry of earthquakes shaking Oklahoma in recent years has been tied to the large volume of
fracking wastewater dumped into the state’s injection wells.

State regulators have directed oil and gas producers in the state to close wells or reduce injection volumes. The regulations have worked
to a certain degree. While Oklahoma has dropped from two earthquakes per day to fewer than one per day, some of the post-regulatory quakes have been large and damaging.

Two big ones happened in 2016: the 5.0 magnitude earthquake that struck Cushing, one of the largest oil hubs in the world, and a 5.8 that hit near Pawnee, the
largest ever recorded in the state.

On Saturday, the Oklahoma Corporation Commission forced oil and gas producer M M Energy Inc to reduce operations on a disposal well in the Perry area.