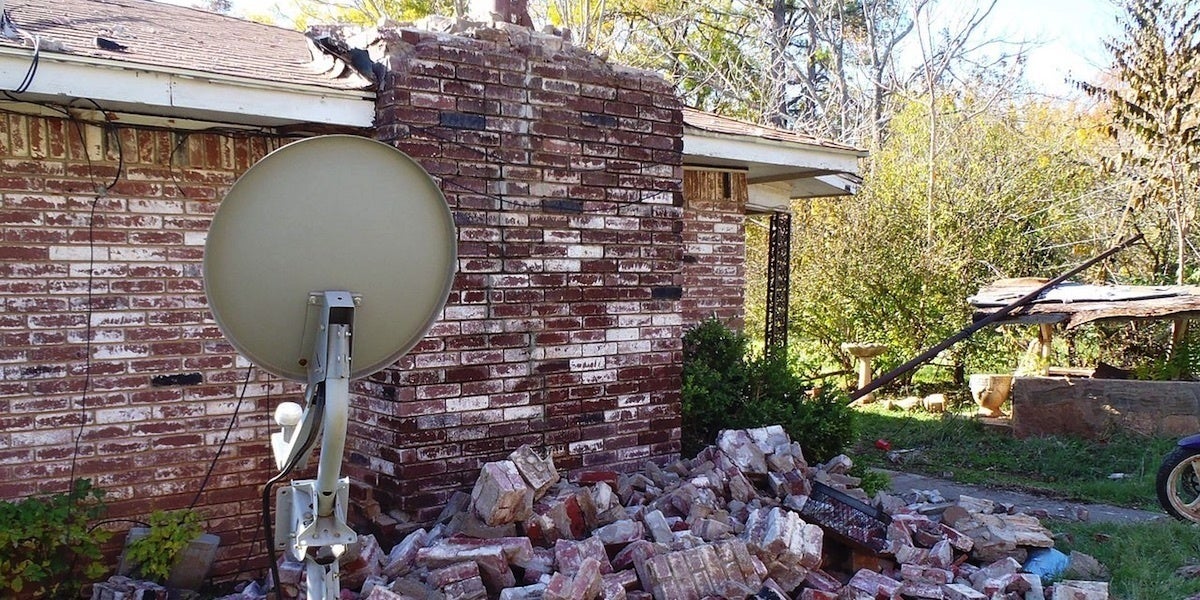 House damage in central Oklahoma from the magnitude 5.6 earthquake on Nov. 6, 2011. Wikimedia Commons

The alarming string of
earthquakes that have shaken Oklahoma for years has long been tied to the large volume of fracking wastewater dumped into the state’s injection wells. And while state regulators have taken numerous measures to reduce wastewater disposal volumes to prevent such “induced” earthquakes, they might want to consider another measure—restricting how deep wastewater gets sent underground.

A new
study, published Thursday in the journal Science, finds that Oklahoma’s earthquakes can also be triggered by wastewater injection depth.

Oklahoma regulators could reduce the number of quakes by half by restricting deep injections in the ground, lead author Thea Hincks, an earth scientist at the University of Bristol, told the AP.

Wastewater should not be injected within 600 to 1,500 feet of the geologic basement, where earthquake faults can generally be found.

“Lab experiments show basement rocks are more susceptible to earthquakes because ‘having fluids in a rock is going to weaken the rock,’ said co-author Thomas Gernon, a geologist at the University of Southampton.

“Previous studies had pinpointed the amount of fluids injected into wells as an issue. Gernon said volume does trigger earthquakes, but when volume levels were reduced the number of quakes didn’t drop as much as had been expected. That’s because where the stuff is put matters slightly more, he said.”

Oklahoma’s wastewater reduction regulations have worked
to a certain degree. While the Sooner State has dropped from two quakes a day to less than one a day, the post-regulatory quakes have been large and damaging. Two big ones happened in 2016: the 5.0-magnitude temblor that struck Cushing, one of the largest oil hubs in the world, and a 5.8 that hit near Pawnee, the largest ever recorded in the state.

According to a press release for the new study, raising injection well depths to above the basement rocks in key areas could significantly reduce the annual energy released by earthquakes. This would reduce the relative likelihoods of larger, damaging earthquakes.

“Thanks to an innovative model capable of analyzing large and complex data sets, our study establishes for the first time a clear link between seismicity and fluid injection depth,” Gernon said in a statement.