Oiled Wildlife Death Toll Is ‘Tip of the Iceberg’ 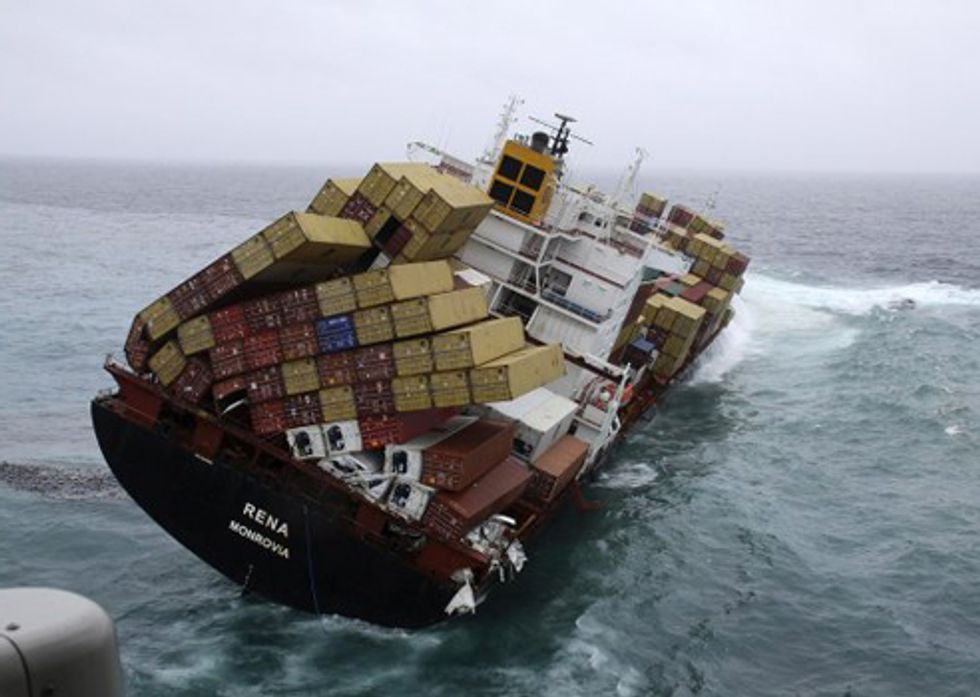 The conservation organisation said that the tragedy should act as a wake up call for government, yet its recent proposed legislation for New Zealand’s offshore environment does little to protect wildlife from future oil spills.

Maritime New Zealand reported Jan. 12 that 45 dead oiled birds have been collected by wildlife recovery teams since the beginning of the week when the stern section of the storm-battered Rena began to sink, releasing more oil and littering the ocean with debris and containers. The current total number of dead wildlife recorded stands at 2066.

“The true number of wildlife killed by the spill will be far greater than the numbers recovered—the corpses the teams are collecting are the tip of the iceberg, and of course the number of animals affected by the spill is greater still,” said WWF-New Zealand Marine Programme Manager Rebecca Bird. “Our main concern remains the long term impacts of the oil spill on the environment. This latest release of oil occurred during a significant storm, so oiled birds would have drowned more quickly and many will disappear from view. The vessel breaking up, discharging more oil and harming more wildlife clearly puts more pressure on an already damaged environment. However, if this had happened before the majority of the oil was removed, it would have been an even greater catastrophe,” she said.

WWF said wildlife recovery efforts it had observed first-hand, which were led by the National Oiled Wildlife Recovery Team coordinated by Maritime New Zealand are "world class," and praised the dedication and professionalism of the staff involved.

“The speed with which the wildlife response teams recovered oiled wildlife, and the high standard of expertise from those involved—from local volunteers to wildlife professionals—is world class,” said Ms. Bird. “The teams out in the field recovering wildlife affected by the spill and those at the recovery centre caring for and restoring the animals to health have worked tirelessly and with sound judgment—you couldn’t find a better operation anywhere in the world.”

“At a time when we are counting the cost of the Rena oil spill, the government’s draft legislation for environmental controls in our offshore environment does little to prevent future spills killing more wildlife. It appears that its primary purpose is to smooth the way for the government's Petroleum Action Plan which aims to attract more oil and gas exploration in our oceans,” he said. “It will allow petroleum development in areas which are so significant for wildlife they should be never be exploited—the equivalent of allowing mining in national parks.”

Currently, the draft legislation does nothing to prevent risky activities such as offshore mining in sensitive areas of the ocean which are home to unique wildlife. WWF is calling for the government to set aside regions of outstanding biodiversity in marine reserves, or national parks of the sea, separate high risk activities from important vulnerable areas of ocean, and specify mandatory areas to be avoided by shipping such as currently exist around the Three Kings Islands, Poor Knights and in Taranaki.

“The Rena oil spill is a tragedy in itself for the wildlife harmed and killed, the damage to the environment, and the impact on the local community. The government should shelve plans to open up more of New Zealand’s oceans for deep sea oil and gas drilling, at least until it is willing to draft legislation that will protect the vulnerable ocean environment,” said Mr. Zuur.

WWF is calling on the government to protect areas important for wildlife, and strengthen the legislation, reducing the risk of spills happening. “Failure to do so would be a kick in the teeth to all those who are working to clean up their beaches and recover wildlife following the Rena spill,” said Mr. Zuur.