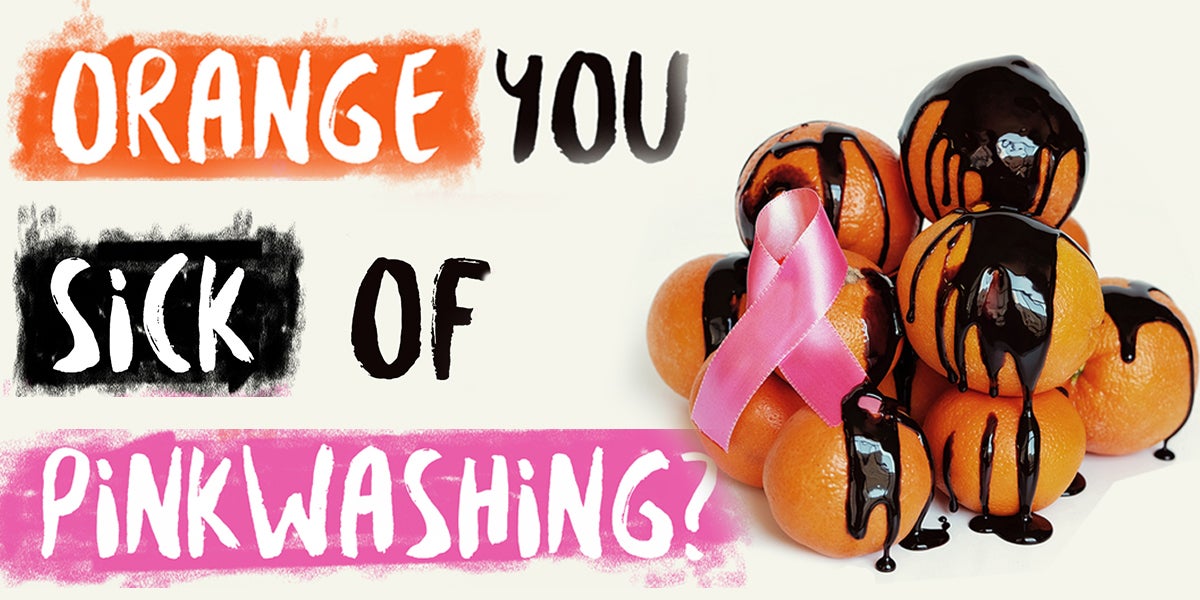 Would you eat oranges grown with oil wastewater? You might be already without knowing it.

Wonderful Citrus, the U.S.’s largest citrus grower and the company behind the popular Halos mandarins and Bee Sweet Citrus, another huge citrus grower, are using leftover wastewater from oil companies to irrigate their citrus—while also using pink ribbons to sell them. 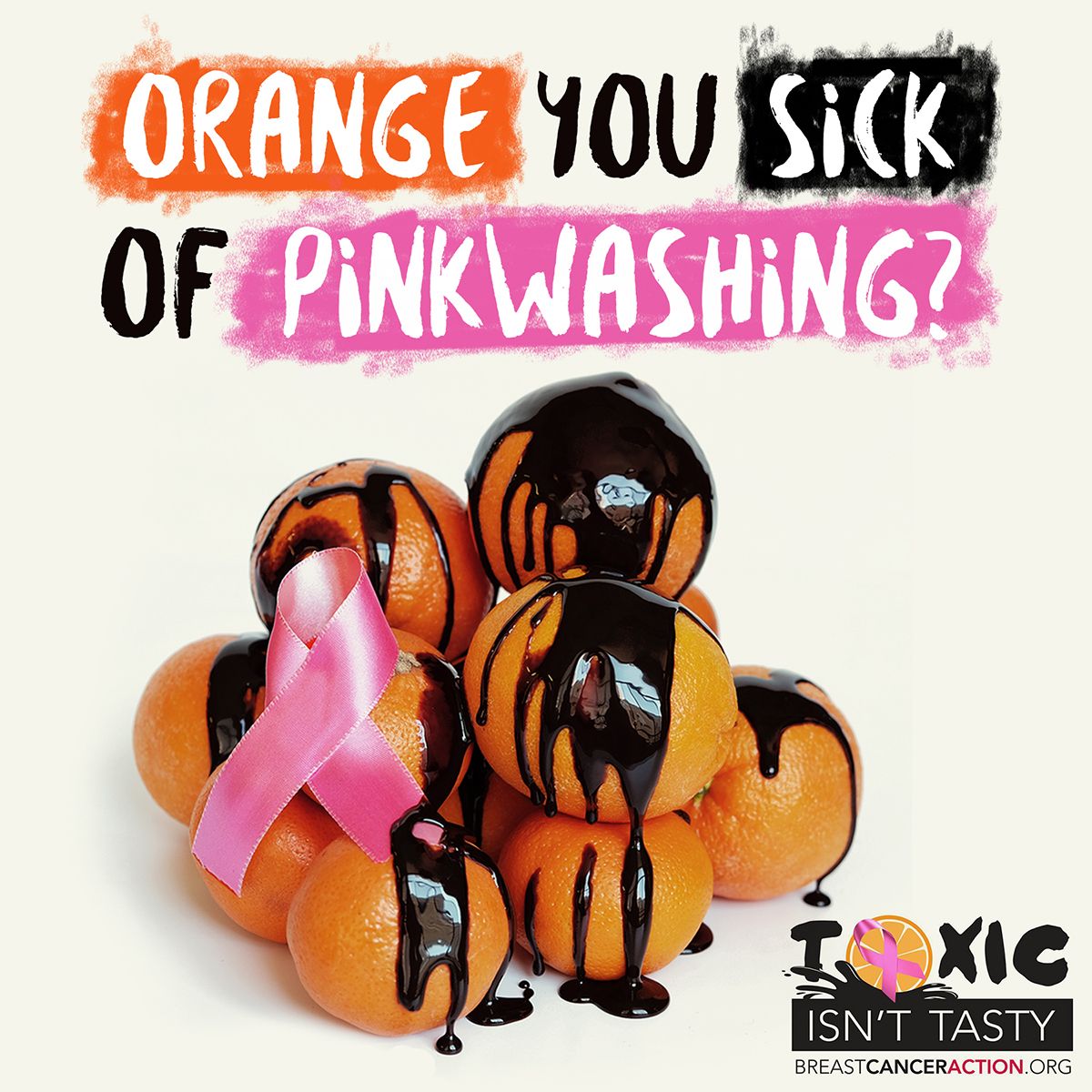 The use of oil wastewater for food irrigation is expanding rapidly in California—the U.S.’s third largest oil-extracting state, which also produces more than a third of the nation’s veggies and two-thirds of its fruits and nuts. Oil corporations are increasingly supplying their wastewater to California-based agricultural companies like Bee Sweet and Wonderful to use for food irrigation during an historic drought. As this type of irrigation is set to expand, we believe this is an urgent public health issue because of the potentially hazardous chemicals associated with the oil extraction process.

Companies use pink ribbons to gain customer loyalty and increase their sales. After all, pink ribbons are profitable. But companies shouldn’t put their profits before our health.

Bee Sweet Citrus puts a pink ribbon on their Sweetheart Mandarin labels “to achieve prevention and find a cure for breast cancer in our lifetime.” And Wonderful Citrus participates in an in-store cause-marketing promotion called Pink Ribbon Produce, aimed at “uniting the produce industry in the fight for breast cancer.”

Both of these companies claim to care about women with breast cancer and are using pink ribbons to sell their products—all while failing to protect farm workers and the public from the potential health risks of using oil wastewater to irrigate their citrus. We call this pinkwashing.

Oil companies use hundreds of chemical additives during the oil extraction process—to drill, maintain and clean their wells. In addition, the oil extraction process releases chemicals that are trapped underground. So when oil is extracted from underground reservoirs, wastewater comes back up with it and can contain all sorts of chemicals. Oil wastewater used for food irrigation has been found to contain the chemical benzene, a known human carcinogen linked to breast cancer. The U.S. Environmental Protection Agency’s Maximum Contaminant Level Goal for benzene in drinking water is zero, which means “there is no dose below which the chemical is considered safe.”

In a new report released earlier this month by PSE Healthy Energy—Healthy Energy, University of California—Berkeley, Lawrence Berkeley National Laboratory and the University of the Pacific, researchers call for a more thorough investigation of the potential health risks associated with using oil wastewater for crop irrigation in light of the potential health harms and gaps in safety testing.

The report finds that despite oil corporations being required to report chemical additives, 38 percent of the chemical additives could not be “sufficiently identified for preliminary hazard evaluation” because oil corporations are concealing them as trade secrets. Of the chemicals these scientists were able to analyze, they found that “43 percent of them can be classified as potential chemicals of concern from human health and/or environmental perspectives.” They found that 10 chemicals are known or potential carcinogens. And they didn’t even evaluate which chemicals are hormone disruptors, a class of chemicals which is linked to increasing our risk of breast cancer.

Current tests of oil wastewater used for food irrigation only look for some of the chemicals used in the oil extraction process. Because of the gaps in testing and treatment, an independent council of scientists commissioned by the State of California recently recommended that wastewater from fracking operations should not currently be used to irrigate our food. But the potential public health risks of the chemicals in oil wastewater are not limited to the fracking process and this report extends the recommendations to include wastewater from any oil operations. We, along with other public health groups and scientists, believe that wastewater from all oil extraction processes should not be used to grow our food, to protect both farm workers and the public from potential public health risks that have not been adequately studied.

Using oil wastewater to irrigate our food has not been proven safe—neither for the health of the public nor for the health of farm workers, who are exposed firsthand to these chemicals. In fact, an expert panel is currently reviewing the potential health risks associated with using oil wastewater for food irrigation—while the state is still permitting this type of irrigation. A growing body of scientific evidence demonstrates the role of our everyday exposure to toxic chemicals in increasing our risk of breast cancer. We need to put the brakes on this process immediately.

In August 2016, we joined with 350,000 concerned people who wrote to California Gov. Jerry Brown, urging him to end the use of oil wastewater for food irrigation. To date, he has failed to do so. In the absence of strong government action, we’re calling on Bee Sweet Citrus and Wonderful Citrus to stop using oil wastewater to irrigate their crops while using pink ribbons to sell their citrus—a practice we call pinkwashing.

Instead, these two companies, which are huge players in their local water districts, should stand up for women affected by breast cancer. We believe they have the power not only to stop using oil wastewater to grow their own citrus crops, but also to stop the use of oil wastewater for growing food altogether.