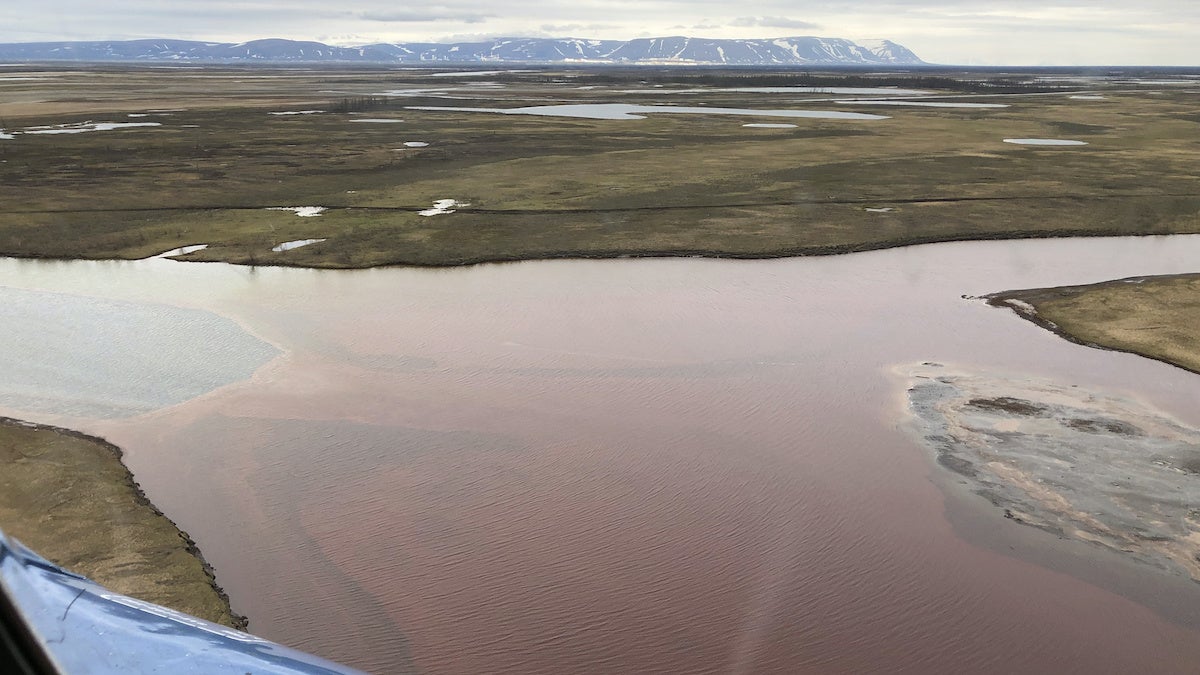 A helicopter view of a diesel fuel spill in Siberia on June 2, 2020. Andrei MarmyshevTASS via Getty Images

Russian President Vladimir Putin declared an emergency after 20,000 tons of diesel fuel spilled into a river in the Arctic Circle.

The accident is the second largest oil spill in terms of volume in modern Russian history, the Word Wildlife Fund (WWF) told AFP, as BBC News reported. The oil spread around 7.5 miles from the fuel site, turning the Ambarnaya river bright red, and contaminated a total of 135 square miles.

“The incident led to catastrophic consequences and we will be seeing the repercussions for years to come,” Sergey Verkhovets, coordinator of Arctic projects for WWF Russia, said in a statement reported by CNN. “We are talking about dead fish, polluted plumage of birds, and poisoned animals.”

Russia’s environmental ministry Rosprirodnadzor is already reporting contaminant levels in the water that are tens of thousands of times higher than the safe limit.

“[T]here has never been such an accident in the Arctic zone, ” former deputy head of Rosprirodnadzor Oleg Mitvol told BBC News.

Greenpeace compared the disaster to the 1989 Exxon Valdez oil spill.

The spill occurred last Friday when a fuel tank at a power plant near the city of Norilsk in Siberia collapsed. The plant is owned by a subsidiary of Norilsk Nickel, the world’s No. 1 producer of nickel and palladium. Its factories are also the reason why Norilsk is one of the most polluted places on Earth, The Guardian reported.

The plant initially attempted to clean the spill on their own and did not tell authorities about the incident for two days, Ministry of Emergency Situations head Evgeny Zinichev said, according to CNN.

Alexei Knizhnikov of WWF said his group was the first to inform cleanup specialists of the spill, according to The Guardian.

“These are huge volumes,” he said. “It was difficult for them to cover it up.”

The governor of the Krasnoyarsk region, where the spill took place, told Putin he only learned of it Sunday from social media posts.

“Why did government agencies only find out about this two days after the fact? Are we going to learn about emergency situations from social media? Are you quite healthy over there?” Putin scolded Sergei Lipin, the head of NTEK, as the subsidiary that owns the plant is called.

Norilsk Nickel countered that NTEK had alerted authorities in a “timely and proper” fashion.

The Russian government has opened three criminal investigations into the incident and detained one plant employee.

The emergency declaration will increase resources for the cleanup. However, the river will be difficult to clean because it is too shallow for barges and in a remote area with few roads.

The accident may have partly been caused by the climate crisis, CNN pointed out. That is because melting permafrost may have caused the storage tank to sink.

“Right now we can assume … that due to abnormally mild summer temperatures recorded in the past years, permafrost could have melted and the pillars under the platform could have sank,” Norilsk Nickel chief operating officer Sergey Dyachenko told the TASS news agency, as CNN reported.

The Arctic is warming twice as fast as the rest of the world.

Northern Asia and Siberia have recorded temperatures on average more than four degrees Celsius above normal during the first four months of 2020. That is the most above normal of any region so far this year.

In late May, Siberia was hotter than Washington, DC and recorded temperatures about 40 degrees Fahrenheit above average.