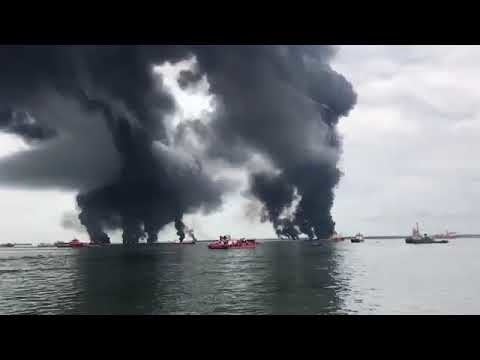 Indonesia has declared a state of emergency after a large oil spill ignited and killed at least four people in the port city of Balikpapan off the island of Borneo over the weekend.

The blaze is now under control but the oil continues to spread. According to
BBC News, the slick currently covers an area of seven square miles and threatens to further pollute the waters.

Fishermen told the
Australian Broadcasting Corporation the spill has killed at least one protected dugong and the contamination could destroy their livelihoods.

“It’s a fire hazard and the smell is still there,” local fisherman Maspele told the publication Monday.

Hundreds of locals have reported health issues including difficulty breathing, nausea and vomiting from the smell of fuel and black smoke.

The city has distributed masks to protect residents, the
Jakarta Post reported.

“I may be exaggerating [with regard to smokers], but the bay is now like a gas station,” Balikpapan secretary Sayid MN Fadli said at City Hall on Monday.

Balikpapan, which has a population of 700,000 people, is a major mining and energy hub and home of state-owned energy company Pertamina.

Pertamina said the disaster has nothing to do with its nearby refinery or undersea
pipelines that run across the bay, the Australian Broadcasting Corporation reported. The firm’s tests on oil samples found marine fuel oil used for ships, not crude oil, it said.

Police are investigating the source of the spill and are questioning the crew of a bulk coal carrier operated by Chinese nationals and have taken samples from the ship, the MV Ever Judger.

“We’re questioning some witnesses including the boat crew of MV Ever Judger, also the local residents, workers from Pertamina—and we’re waiting for all the results,” Inspector General Widyanto said.