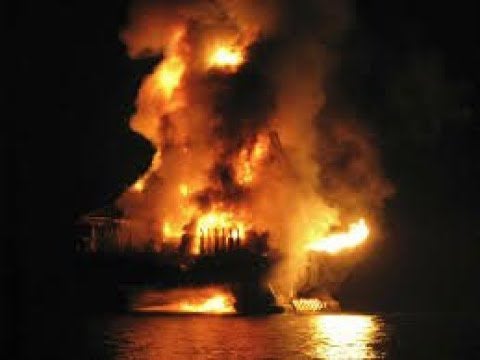 The explosion was reported at 7:18 p.m. near St. Charles Parish and the city of Kenner. The platform, located in unincorporated Jefferson Parish, is owned by New Orleans-based Clovelly Oil Company.

Chief David Tibbets of the East Bank Consolidated Fire Department said the platform is used for the transfer of oil. He said the department’s current goal is to stop oil flow and, if needed, let it burn off safely,
WDSU reported.

The fire is under control but oil might be leaking into the lake, local fire officials
said.

The cause of the explosion is currently unclear, but Kenner city government announced that cleaning chemicals ignited on the surface of the oil rig platform, citing authorities.

The rescued crew members are being treated at local hospitals. Five “have blast type injuries and burns” and are in critical condition, Kenner Police Department spokesman Sgt. Brian McGregor told The Times-Picayune.

The explosion took place just days after an offshore pipeline fracture spilled up to 9,350 barrels (about 393,000 gallons) of oil into the Gulf of Mexico, about 40 miles southeast of Venice, Louisiana, The Wall Street Journal reported.

The flow has been contained and cleanup is underway, according to the offshore oil producer, LLOG Exploration Company LLC, a privately-owned deepwater exploration company.

The explosion in Lake Pontchartrain and the spill off the Louisiana coast are unrelated but they come about seven years after the Deepwater Horizon oil rig explosion claimed the lives of 11 men and spilled 4.9 million barrels of crude oil into the Gulf of Mexico.