The number of oil and gas rigs in the U.S. has increased an astonishing 38 percent over the past year. That’s according to S&P Global Platts Analytics, which reported this week that the country had 1,070 rigs at the end of January, up from just 773 a year earlier.

Experts expressed fear that all of this new development does not bode well for the planet. “This will have a very significant climate impact,” said Romany Webb, climate law fellow with the Sabin Center for Climate Change Law. “The oil and gas industry is a huge source of methane, which is a really potent greenhouse gas. And then on top of that you also have the carbon dioxide emissions from the combustion of this oil and gas. So this is very concerning from a climate perspective.”

Webb links the increase in drilling, in part, to the recent rise in prices for crude oil and natural gas. “Oil is now above $60 a barrel, which is what the industry always said that they needed to ramp up production,” she said.

Experts also connect the boom to the policies of the Trump administration, which has prioritized the extraction of oil, natural gas and coal over the development of renewable energies even as the planet continues to warm. “That the hottest years in human history coincide with a dramatic increase in U.S. drilling for oil and gas is a reminder of what a rogue nation we now live in,” said noted environmentalist Bill McKibben.

The extraction boom took place nationwide, with all but one of S&P’s reporting regions (see below) gaining new rigs. The fastest growth occurred in two states in the natural gas-rich Permian Basin: Texas gained 141 rigs, while New Mexico added 43. S&P also noted that extraction companies are moving outside the Permian Basin, which, according to senior analyst Trey Cowan, indicates “future growth being led from other regions in the months ahead.”

The analysis includes rigs located on U.S. land, as well as in inland waters and the Gulf of Mexico. 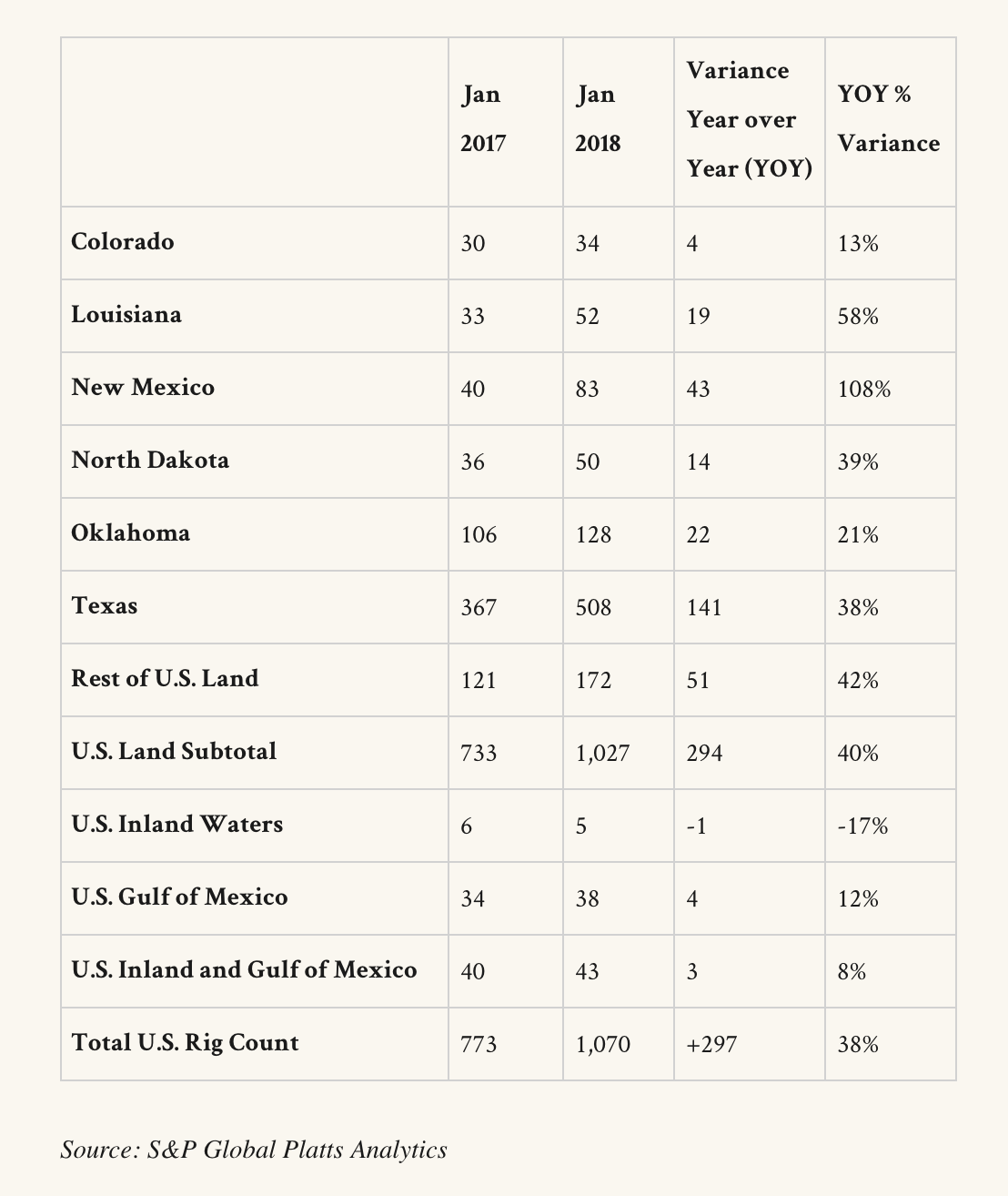 It doesn’t look like this will slow down any time soon. The number of rigs has already increased in the few days since January ended. The weekly Platts RigData Locations & Operators Report for Feb. 5 revealed that there are now three additional rigs in operation, for a total of 1,073, with 61 more facilities “waiting to spud” (industry terminology for getting ready to start drilling).

S&P released its data the same day the U.S. Energy Information Administration issued its annual Energy Outlook report for 2018, which projects U.S. oil production will soar past 11 million barrels a day by the end of this year.

The report also found that natural gas use in this country will increase at an annual rate of 0.8 percent through the year 2050. The use of wind and solar energies is also projected to increase at a similar rate. Coal and oil are expected to decline, but that won’t be enough to offset the increase in emissions caused by the use of natural gas. The Energy Information Administration predicts that the U.S. carbon footprint will dip slightly over the next few years and then increase by mid-century.

The impact won’t just occur in the U.S., as the agency found that the U.S. will become a net energy exporter by the year 2022, pushing an additional rise in emissions worldwide. As Inside Climate News put it, “the U.S. would almost single-handedly exhaust the whole world’s carbon budget by midcentury.”

The total effect of this mad rush to drill may be felt for even longer than that. “Our short-term folly will be felt for tens of thousands of years in the geologic record,” said McKibben.