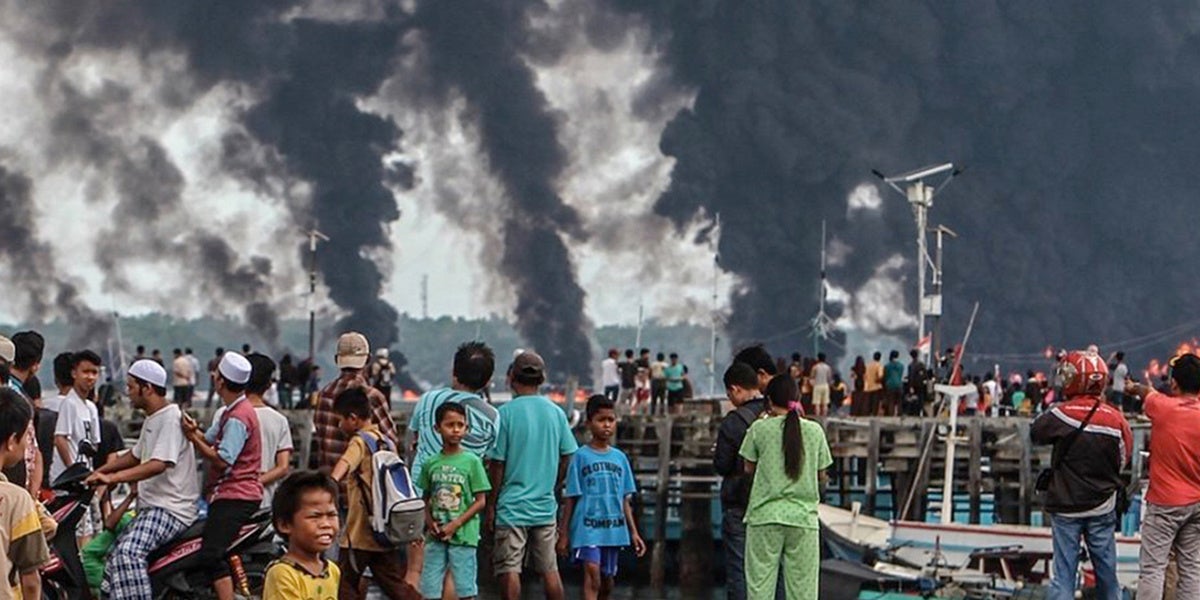 The company
initially said the disaster had nothing to do with its nearby refinery or undersea pipelines that run across the bay, noting that its own tests on oil spill samples found marine fuel oil used for ships, not crude oil.

But on Wednesday, Pertamina admitted that its crude oil pipeline was indeed the cause. A company manager
noted the distribution line was closed immediately after divers detected the leakage on Tuesday. A test on a tenth oil spill sample also confirmed that it was crude. The firm is now calculating the amount of oil leaked into the bay.

The government, however, insists the incident is not Pertamina’s fault. An energy ministry official cast blame on a foreign coal vessel that dropped anchor in the bay and dragged the pipeline 120 meters from its initial location, causing it to crack.

“The pipe was allegedly dragged by an anchor dropped by a vessel, though no vessel was permitted to drop anchor or even pass through the bay,” Djoko Siswanto, the Energy and Mineral Resources Ministry’s oil and gas director general, said, according to
The Jakarta Post.

The minister did not identify which ship but police investigating the spill have questioned the crew of the Panama-flagged MV Ever Judger.

“So, this was actually the fault of the vessel. […] As there were casualties in the incident, the owner of the vessel could be charged for the crime. But it all still depends on the results of the ongoing investigation,” Djoko said.

Greenpeace Indonesia said Pertamina is responsible for the disaster. On social media, the group condemned the state-run company for the tragedy and charged it with restoring the Balikpapan Bay ecosystem.

“This is why the world has got to start switching to renewable energy and leaving behind the limited fossil energy and destroying our planetary environment and our future,” Greenpeace Indonesia said (via Google Translate).

Indonesia declared a state of emergency on Monday after the spill ignited and killed at least five people in the port city of Balikpapan over the weekend. Hundreds of locals reported health issues including difficulty breathing, nausea and vomiting from the smell of fuel and black smoke that emanated from the blaze.

The environment ministry
said the oil slick has spread across 13,000 hectares (50 square miles) of Balikpapan’s waters and polluted 60 kilometers (37 miles) of coastal ecosystems, including mangrove wetlands and marine mammal habitats.

Zulficar Mochtar from the marine and fishery ministry said the spill threatens the ecosystem, economy and livelihoods of local fishermen.

“We cannot solve this problem alone, we need to find collective solution. The efforts would be beyond beach cleaning,” Mochtar
said on Thursday.

This is yet another example of the cost of our use of oil and shows how important it is for our environment and our health that we end the oil agehttps://t.co/K2Eu6xCaek