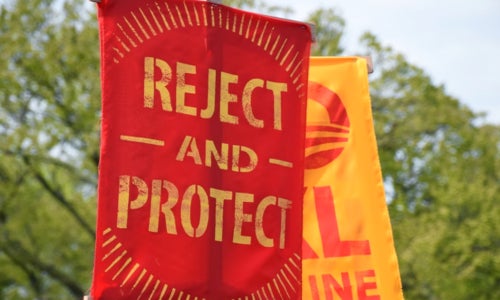 After the State Department issued a blow to Keystone XL proponents last Friday by delaying a final decision on the project, the oil industry’s main front group, the American Petroleum Institute (API), is lashing out at pipeline opponents. 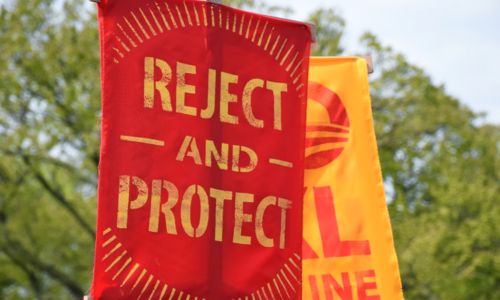 The Cowboy Indian Alliance and supporting organizations are hosting a five day encampment on the National Mall to show opposition to the Keystone XL pipeline. Photo credit: Bold Nebraska

Yesterday, API released an offensive online ad that mocks Nebraska ranchers and farmers in the Cowboy and Indian Alliance as old-fashioned relics from “1800s America.” The Cowboy and Indian Alliance is responding by inviting representatives from the industry group down to their Reject and Protect encampment to meet with the people whose lives will be directly impacted by Keystone XL.

“This is a stupid ad. We’re trying to take America into the 21st century with clean, renewable energy–and we don’t need dirty tar sands to do it,” said Tom Genung, a Nebraska landowner and chairman of the Nebraska Easement Action Team, a collective of landowners who are standing up to eminent domain threats and not selling their land to TransCanada. “This is not for novelty sake: we’re here to defend our homes and families. API should come down and meet us face-to-face instead of mocking us from their cushy offices. Let’s see if they have the guts.”

“These oil lobbyists didn’t dare put an Indian in their ad because they knew it would be an outrage,” said Gary Dorr, a Nez Perce Tribe member and U.S. Army veteran who works with the Cowboy and Indian Alliance. “But they have no shame when it comes to violating our treaties, poisoning our children’s children’s water, and destroying our environment. API’s portrayal of the cowboys offends us just as much if it was one of our own. We’re here in DC this week to stand up to corporate bullies like these.”

In another last ditch effort to show support for Keystone XL, API will unveil yet another oil industry-commissioned push poll showing supposed support for the project.

“Big Oil is so desperate to take away the focus from the Cowboys and Indians camped out on the Mall this week that they’ve resorted to push polls and more misleading propaganda,” said Jane Kleeb of Bold Nebraska.  “The more people learn about Keystone XL, the more they reject it. That’s why momentum is on the side of American protecting their property rights and clean water.”

“With the recent State Department delay, Big Oil knows they’re losing,” Kleeb continued. “Misleading polls aren’t going to turn that train around. We invite API to visit the tipi camp and have a discussion with those of that would be faced with tar sands pollution on land that has been passed down through generations.”

The Reject and Protect encampment has helped focus national attention on the people and places that would be directly impacted by the construction of the Keystone XL pipeline and tar sands expansion. This Thursday, the Cowboy and Indian Alliance will host a prayer ceremony outside Secretary Kerry’s house in Washington, D.C., to urge him to come out against the project. This coming Saturday, more than 5,000 people are expected to join the Alliance for a procession through the Capitol.

“Big Oil knows the facts aren’t on its side, so it’s resigned to shameless mockery of the communities who deal every day with the harsh realities of the impacts of the dirty tar sands industry,” said David Turnbull, campaigns director, Oil Change International. “Big Oil is so used to having the run of D.C. that when real people with real stories come to town they just try to bully them out. Rest assured, the Cowboy and Indian Alliance won’t be bullied.”