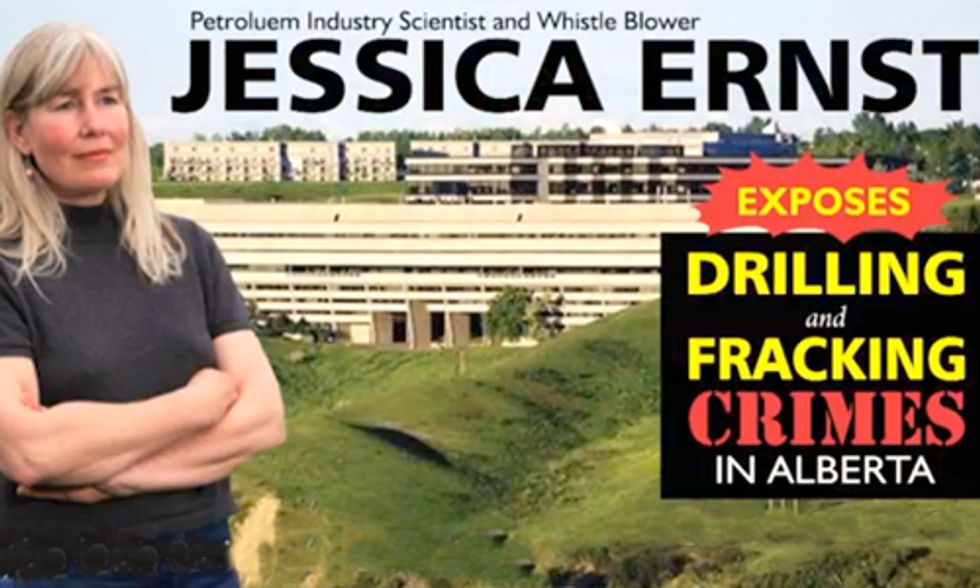 This You Tube is a compilation of segments from a 90 minute talk. Jessica Ernst worked for more than three decades as an environmental biologist doing research and independent consulting for the Alberta, Canada petroleum industry. One of her main clients was the EnCana Company, which began large-scale fracking in the region of her home community of Rosebud Alberta in the early years of the 21st century.

In 2007, Jessica Ernst the scientist became Jessica Ernst the whistleblower. Bringing forward evidence that her own water well and those of her neighbors had been severely contaminated, Ernst sued the EnCanada Corporation. She also sued the forerunner of the Alberta Energy Regulator as well as the Alberta government itself.

Ernst is especially intent on getting some accountability from the Alberta Energy Regulator (AER), which is 100 percent industry-funded. She accuses the AER of violating her freedom of association under the Canadian Charter of Rights and Freedoms. Ernst made this allegation based on a directive issued by the oil and gas regulator, Jim Reid. Rather than doing a credible investigation of Ernst's complaints, Reid ordered his staff to cease all communications with Ernst in 2005.

Tellingly, the current head of the AER is Gerard Protti, a former executive of EnCana Corporation. His conflict of interest is illustrative of a culture of conflict of interest that is transforming the governments of Canada and Alberta into wholly-owned subsidiaries of Texas-based and China-based oil and gas companies.

Ernst explains how this failure at the top is resulting in the poisoning of the environment and the severe undermining of public health. The quality of commercial agriculture is thereby undermined. The vitality of wildlife is attacked. Similarly, the public health of Albertans is under assault.