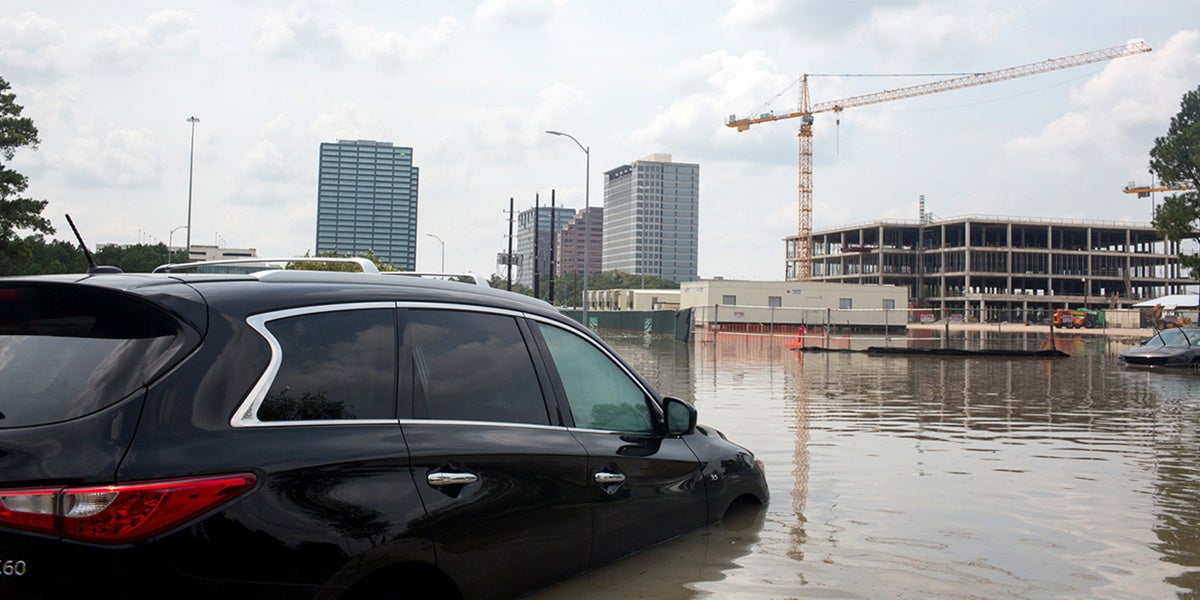 The burning of fossil fuels is the driving force behind climate change, and now the companies responsible want the government to help pay to protect them from the consequences.

Texas is seeking at least $12 billion to build a network of seawalls, levees, gates and earthen structures that would protect a stretch of the Gulf Coast from Louisiana to the area south of Houston that houses 30 percent of U.S. oil refining capacity, The Associated Press reported Wednesday.

The Army Corps of Engineers approved $3.9 billion for smaller projects that would protect oil facilities in Port Arthur and Freeport in July, The Associated Press and The Houston Chronicle reported.

“The oil and gas industry is getting a free ride,” Sierra Club Houston executive committee member Brandt Mannchen told The Associated Press. “You don’t hear the industry making a peep about paying for any of this and why should they? There’s all this push like, ‘Please Senator Cornyn, Please Senator Cruz, we need money for this and that.'”

Texas Republican politicians like Senators John Cormyn and Ted Cruz, who signed a letter urging President Donald Trump to withdraw from the Paris agreement and are generally hostile to public spending, support federal funding for the project. Many see it as a priority after Hurricane Harvey flooded Houston and took out 25 percent of the area’s refining capacity for a time.

“Our overall economy, not only in Texas but in the entire country, is so much at risk from a high storm surge,” Gulf Coast-area Republican Judge Matt Sebesta told The Associated Press.

The idea for the “Ike Dike,” as the 60-mile network of barriers is called, took off after Hurricane Ike battered Texas in 2008 and caused half-a-million gallons of crude oil to be released into Texas waters, Climate Liability News reported.

Most local environmental groups supported the general need to protect the coast from storm surges, and prevent storm-caused oil spills, but were worried a plan would be rushed through after Harvey that would bypass environmental reviews assessing its potential impact on wildlife and the salinity of Galveston Bay.

“You may prevent the bay from being ruined by a release of petrochemicals, but you may ruin it by changing the hydrology,” Galveston Bay Foundation spokesperson Scott Jones told Climate Liability News.

Some of those concerns were mitigated when the federal government approved insufficient funding to fast track the project last year.

In July, the Army Corps of Engineers approved $1.9 million to study the best design for the Ike Dike, and the study draft and environmental impact statement should be released in September, The Houston Chronicle reported.

The limited project that has been approved is the Sabine Pass-to-Galveston Bay Coastal Storm Risk Management and Ecosystem Restoration. The initial funding proposal protected larger parts of the coast, but as the project has been refined it has focused more specifically on refineries, The Associated Press reported.

Part of the project will raise dirt levees and build or expand flood walls around Port Arthur, where refineries owned by Saudi-owned Motiva, Valero Energy Corp. and Total S.A. are located.

“You’re looking at a lot of people, a lot of homes, but really a lot of industry,” Army Corps of Engineers resident engineer in Port Arthur Steve Sherrill told The Associated Press.

Another part of the project will build 25 miles of new seawalls and levees in Orange County, where facilities belonging to Chevron and DuPont are located. A third will increase and heighten seawalls protecting Freeport, as well as a Phillips 66 export terminal for natural gas and many chemical plants.