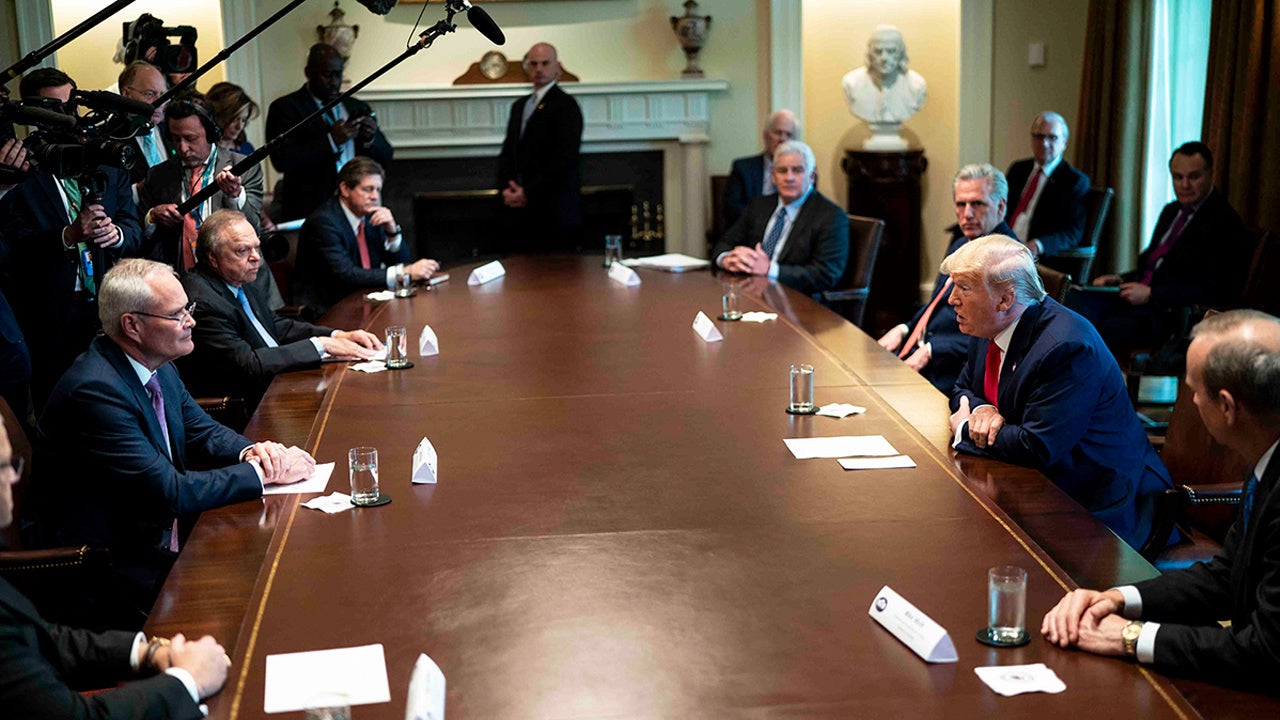 A coalition of climate organizations strongly criticized President Donald Trump’s in-person Friday meeting with the chief executives of some of the biggest fossil fuel companies in the world, saying the industry that fueled climate disaster must not be allowed to profiteer from government giveaways by getting bailout funds or preferred treatment during the coronavirus pandemic.

The CEOs attending the White House meeting, scheduled for 3 p.m. Friday, have been dubbed “the seven oily henchman of the climate apocalypse” and reportedly include ExxonMobil’s Darren Woods, Chevron’s Michael Wirth, and Energy Transfer’s Kelcy Warren, as well as billionaire and fracking pioneer Harold Hamm, who recently stepped down as CEO of Continental Resources CEO.

Where the rest of the world sees a global health and economic crisis, fossil fuel CEOs see an opportunity to line their pockets. Trump is on their side, and we’ve got to fight back with everything we have.

The summit comes on the heels of a month in which more than 10 million Americans lost their jobs, and millions of Americans may be stuck waiting weeks to receive their one-time stimulus check while big businesses stand ready to reap benefits of their share of 0 billion in corporate bailout funds that were part of the coronavirus relief package passed last week.

“If corporations are people, they shouldn’t be getting more financial assistance than the American people,” said Mary Gutierrez, executive director of Earth Ethics. “This isn’t the time for bailouts, it’s the time for transitioning. We need to be transitioning from fossil fuels to renewable energy sources.”

Earth Ethics is part of the Stop the Money Pipeline coalition, which advocates for financial institutions to stop funding and investing in projects the group says amount to “climate destruction.”

The big oil summit, the coalition warned, must not lead to a bailout for the industry, especially at a time working Americans’ needs must be centered and as the climate crisis necessitates huge investments away from dirty energy towards renewables.

The meeting’s agenda “is reportedly expected to include discussions about federal storage of oil, tariffs on foreign oil, and drilling on public land,” CNBC reported Thursday. CNN added, “The American Petroleum Institute, the industry’s biggest lobby, has said oil companies aren’t seeking a bailout from Trump.”

But the climate coalition isn’t convinced of that API claim.

“Let’s not be fooled by these CEOs’ claims that they don’t want bailout money: if they’re going to the White House, it’s either to ask for yet another spigot of federal government money for corporations or for yet another relaxation of environmental protection rules,” said Moira Birss, Amazon Watch’s climate and finance director.

“It’s unacceptable that Trump is more focused on serving corporate interests that are destroying our climate than responding to the urgent needs of workers, the unemployed, and the sick. We need a people’s bailout, not a polluters’ bailout!” she added.

According to a Morning Consult poll released Thursday, just 38% of voters support a bailout for the oil and gas industry, while 54 percent back a renewables industry bailout.

Jamie Henn of the Stop the Money Pipeline Coalition said the fossil fuel sector has been up to “terrible things” amid the pandemic. As one example, he pointed to the industry getting “the Environmental Protection Agency to stop enforcing environmental and public health protections indefinitely.”

One of the more important twitter threads in a long time. The fossil fuel industry is dirty in every way https://t.co/D1eymMRkr7

The industry has friends in Congress helping it get its wishes. Twelve Senate Republicans urged Interior Secretary David Bernhardt this week to give the industry help during the economic fallout of the coronavirus crisis by suspending federal royalty payments for fossil fuels.

“Oh, so we have to pay our rent, but now Big Oil doesn’t have to pay anything for destroying our public lands? Cool, cool,” said Henn.

“Sending a financial liferaft to failing fossil fuel corporations while so many are losing jobs and hope for recovery is a slap in the face to hardworking American families,” said MacGillivay.

“While many are struggling to breathe, oil fat cats are looking for yet another handout for their businesses that pump pollution into our finally clearing air and lungs. With EPA pollution enforcement sidelined during the COVID-19 pandemic and the Trump administration’s rollback of health-based fuel efficiency standards during a climate crisis, now is the time to put the brake — not the gas — on oil company handouts. Let’s invest in renewable, safe energy jobs,” she added.

There may be an even bigger prize than a bailout on the table.

“The biggest win the fossil fuel industry could receive during the coronavirus crisis,” according to Emily Atkin, who writes the Heated newsletter, is “the ability to silence their most effective political opponents — climate activists — by threatening them with hefty financial penalties, felonies, and prison time for protesting their operations.”

That’s because other states could follow in the footsteps of three states that have passed so-called “critical infrastructure bills” since the coronavirus outbreak that bar climate activists from engaging in civil disobedience.