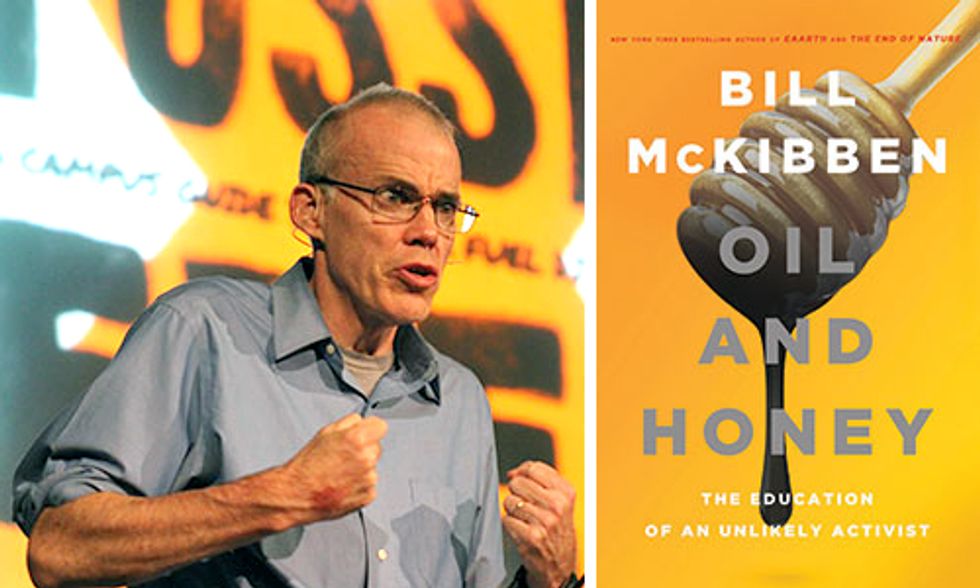 I’ve read most of Bill McKibben’s books and this one is the best. This book gives you an inside scoop on the last few years of McKibben’s life, both professionally and personally.

The professional part of McKibben’s life is about fossil fuels and is wildly intriguing, covering the birth of his organization 350.org, all the way through the end of his Do The Math tour in early 2013 in which he launched the first fossil fuel divestment movement in history.

You’ll read about the biggest nonviolent climate change rally at the White House (and McKibben’s thoughts from jail soon thereafter) and Washington Mall, and the most aggressive anti-Keystone XL pipeline civil disobedience event.

The professional part of this book is chock full of quotes which I underlined and dog-eared. Glancing back at those underlines, my favorites all seemed to center around the idea that individual people and grassroots power is the key to moving forward in facing climate change and fighting the fossil fuel fanatics. McKibben has some softly pointed words for his friends in the mainstream environmental movement and some sharper words for his hoped-for friend in the White House, President Obama.

One of my favorite quotes skewers Obama’s “all of the above” energy policy and our addiction to fossil fuels:

“Drilling everywhere you can and then putting up a solar panel is like drinking six martinis and then topping them off with a vitamin water—you’re still drunk, you just have your day’s full allotment of C and D.”

McKibben is a bit nicer to the mainstream environmental movement as he eloquently points out that gang green politics pretty much lost the game and now grassroots power is the only step forward:

“I’d watched how the big green groups had fallen into the trap of fighting the last war—their big beltway operations were better suited for the 1970s, when they could lobby Congress with some hope of victory.”

The personal part of his book is about honey and is intriguing and eloquently written. While telling the professional story of his life, McKibben takes us back to Vermont on multiple occasions where he visits and assists a friend in the beekeeping industry. This beekeeper is a purist and a bit of a luddite, juxtaposing McKibben’s globetrotting, twittering, 24/7 public relations and million-person-organizing planet-saving eco-machine.

Although McKibben has made himself into the world’s foremost professional and political environmentalist, his visits back to Vermont shows his angst and inner turmoil about the two lives he leads.

We are lucky McKibben leads these two lives. He softly points it out in the book, but I’ll say it a little more plainly: McKibben’s a real person, not a slick politician or head of a multibillion dollar corporation, and it’s real people with real jobs and real values who are needed to lead the next phase of work to protect the planet.

At one point in the book, McKibben likens the drone honeybees, and their single-minded mission to gather pollen and bring it back to the queen and hive, to the corporate fossil fuel industry. McKibben writes:

“A corporation, far more wonderful in its abilities to execute a plan than any of us individuals, is nonetheless uncomplicated. It doesn’t care much about the past and can’t think very far into the future. If it does, its shareholders will rebel. It’s less like a person than like a bee, at least in this regard. Given the power of speech like a human, it won’t use it to reflect, to check itself, or to think about the larger good. It will simply put this new power to work on its single-minded goal of amassing wealth, just as the Koch brothers did, sublimely unconcerned that their tar sands investments were threatening the planet.

In other words, if your goal is to efficiently tap the tar sands, you need a corporation. But to decide if tapping the tar sands is a god idea, you need to keep corporations out of it. Their relentless simplicity will combine with their wealth to overwhelm reason, science, love. If you want honey you need a hive of bees. But if you were trying to decide if making honey was a good idea, bees would be last creatures to ask. You know what their answer is going to be. In fact, if you get in their way, they’ll be a little perplexed for a while trying to find the door. And if you persist in getting their way, they’re eventually going to get mad and sting. That’s just how it works.”

I disagree with this metaphor.

It’s completely unfair to honeybees which are beautiful, natural, pollinate this world therein making it habitable for us and billions of other creatures, and make one of the sweetest and most luxurious foods known to humankind and bears alike. Honeybees are not like fossil fuel corporations at all, in my opinion.

And so, respectfully, I disagree with McKibben and cannot allow the good name of honeybees to be impugned by such a metaphor.

Finally, as a realist (not an optimist or a cynic) I need to point out something that McKibben wrote several times in his book. McKibben repeatedly notes that he is concerned that we may have “waited too long” and it “may be too late.”

McKibben is creating history, but 350.org is also history. We’ve already passed that point, bumped up to 400.org, and are heading higher by every conceivable political and mathematical calculation. And so I believe it’s time for the environmental movement (and the human race) to envision a new number and organization. Let’s call it 1,400.org. Where did I get that number? From McKibben’s friend (and a co-star in his book), former NASA scientist James Hansen, who postulates in a September 2013 scientific paper, Climate Sensitivity, Sea Level and Atmospheric Carbon Dioxide (abstract here, full paper here), that if we burn all of the fossil fuels we end up at 1,400 parts per million of greenhouse gases, and if that happens, Dr. Hansen says:

“Burning all fossil fuels, we conclude, would make most of the planet uninhabitable by humans, thus calling into question strategies that emphasize adaptation to climate change.”

America is shutting down some coal plants, yes, but hurrying to ship every ounce of coal to ports in China and elsewhere. America is fracking itself to death in shale deposit regions, burning (and leaking) methane gas and trying desperately to ship it oversees. And then there’s most of the rest of the world, building coal plants as fast as possible, digging up and burning tar sands, hoping to get shale gas imported by liquified natural gas as fast as possible, and endlessly, endlessly, endlessly (did I say that enough times?) growing its energy-consuming human population.

What would an organization like 1,400.org do? I’d call it a Post Climate Change Apocalyptic Transition (PCCAT) organization that focused on:

If you’re a large climate change foundation, please fund McKibben to try and help keep the number around 500.org or 700.org, but also create and fund 1,400.org—it may be the most compassionate and realistic step forward to benefit honeybees and humans alike.

Gary Wockner, PhD, is an environmental activist and writer based in Fort Collins, Colorado—Gary@GaryWockner.com.