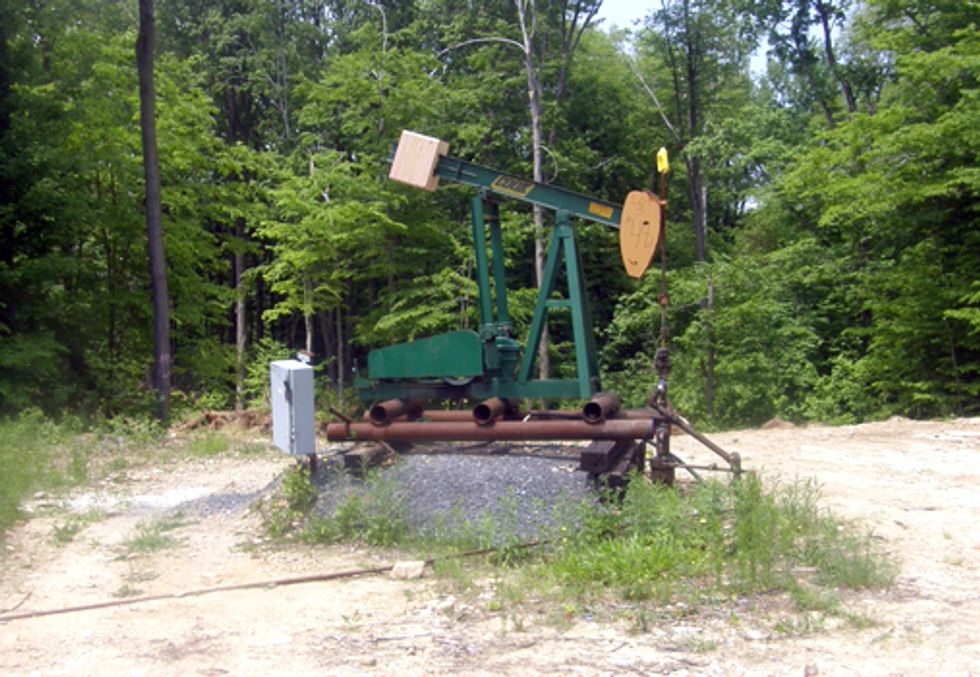 According to the Forest Service there are more than 11,000 stripper wells throughout the Allegheny National Forest. Photo by Stefanie Penn Spear.

In December 2009, Judge McLaughlin granted the plaintiffs’ motion for a preliminary injunction, which blocked the settlement from going into effect while the case was being litigated. Both the Forest Service and the conservation groups appealed that preliminary decision. In September 2011, the U.S. Court of Appeals for the Third Circuit upheld Judge McLaughlin’s preliminary decision. According to the courts, because the Forest Service does not own the mineral rights beneath 93 percent of the Allegheny National Forest, the agency cannot regulate access to the mineral estate, even though that access directly impacts national forest lands through extensive road, well site and pipeline construction.

The parties are now at loggerheads about how the case should proceed. As will be explained further below, the conservation groups want Judge McLaughlin to reconsider his preliminary decision because of new research into the history of the creation of national forests in the eastern U.S. The oil and gas plaintiffs want Judge McLaughlin to simply convert his previous preliminary decision into a permanent injunction against the Forest Service. That would effectively bar the Forest Service from attempting to implement any measures to mitigate the environmental impacts of most oil and gas drilling in the Allegheny National Forest—a result that is already contributing to cross-state pollution entering New York.

According to the courts, however, the Forest Service is powerless to regulate this pollution in the Allegheny National Forest. The courts and the oil and gas industry assure the public that this does not mean that oil and gas drilling will go completely unregulated in the Allegheny National Forest because the Pennsylvania Department of Environmental Protection (PADEP) still regulates oil and gas drilling at the state level. Of course, if the PADEP were doing its job, the NYDEC would not have to file an administrative complaint against U.S. Energy for sediment pollution originating in Pennsylvania.

In 1911, Congress passed the Weeks Act, the first federal law allowing the Forest Service to acquire private lands in the eastern U.S. for designation as national forests. In the late 1800s and early 1900s, flooding and forest fires were rampant throughout the eastern U.S. because of widespread, unregulated clearcutting. One of the primary purposes of the Weeks Act was to allow the Forest Service to regulate to protect these lands and reduce sediment pollution in our streams and rivers.

House and Senate reports published prior to the Weeks Act’s passage, reveal a common theme: that the states had failed to protect these lands and could not be expected to correct the problem. In other words, Congress recognized that the flooding and wildfires caused by unregulated clearcutting were a national problem, not merely a state or local problem. The purpose and intent in passing the Weeks Act was to provide the Forest Service authority to regulate land use so as to protect these forests and watersheds. That authority must include the power to regulate access across the federal surface for the extraction of privately owned minerals.

There is nothing in the congressional record indicating that Congress did not intend for the Forest Service to regulate private oil and gas drilling activities in eastern national forests. In fact, just the opposite is true. The congressional record reveals that Congress intended the Forest Service to have the same power over eastern national forests as it had over national forests in the western U.S. That would include the authority to require private oil and gas companies to implement reasonable mitigation measures to reduce their environmental impact in the Allegheny National Forest.

A century later, the oil and gas industry is attempting to erase this history. Earlier this year, the Pennsylvania legislature enacted Act 13. Most people are aware of this legislation because it stripped local municipalities from being able to pass ordinances aimed at protecting communities from the onslaught of shale gas drilling.

These are just some of the issues that are going to be debated at the hearing on July 2. Show your support for the Allegheny National Forest and sensible regulation of the oil and gas industry by attending the hearing. Contact the Allegheny Defense Project for details regarding hearing.

We need you there to show support for the protection of our Allegheny National Forest. We need you to witness the proceedings. Join us on July 2 at 9 a.m. at the Erie Federal Courthouse (17 South Park Row, Erie, Pa). Call 814-520-4639 if you need more information.