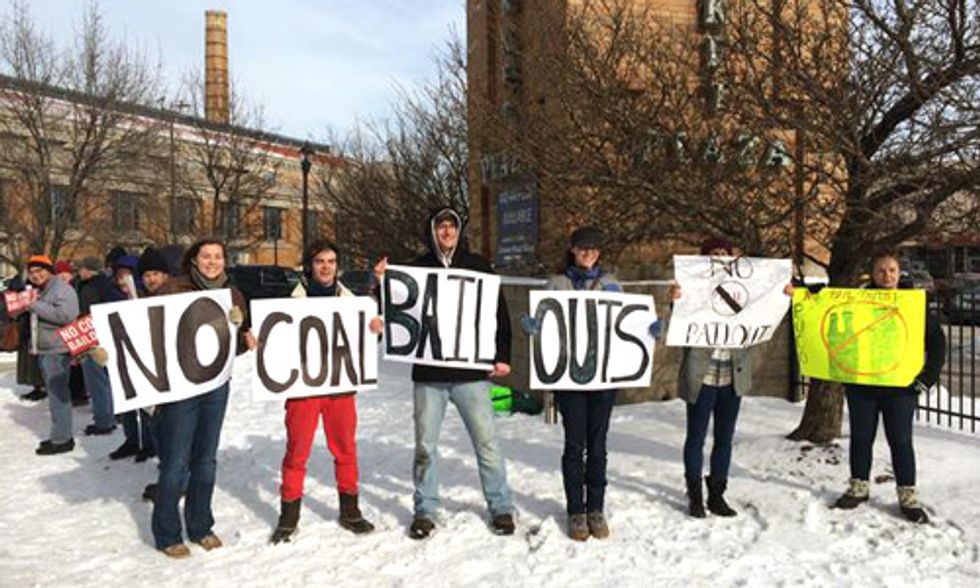 Swing state Ohio is plunging ever deeper into the fossil/nuke abyss.

None of those coal/nuke burners can compete with the rising revolution in renewable energy. Throughout the world, similar outmoded facilities are shutting down.

In 2001, Ohio deregulated its electric markets. But the state's nuke owners demanded nearly $10 billion in "stranded cost" handouts so the obsolete Davis-Besse and Perry reactors on Lake Erie could allegedly compete with more efficient technologies.

Today, despite the huge subsidies, renewables and fracked gas have completely priced them out of the market.

Davis-Besse—a Three Mile Island clone—is infamous worldwide for its horrific breakdowns, including two of the five worst in U.S. history since 1979 as listed by the Nuclear Regulatory Commission. In 2002 a boric acid leak was found to have eaten nearly all the way through its reactor pressure vessel. A Chernobyl-sized disaster was missed by a fraction of an inch. The ensuing  fines comprise the biggest in NRC annals. The $600 million spent on replacement power could have funded an opening transition to a renewable economy. Instead, fires, operator error and chronic malfunctions continue to define Davis-Besse's public-sponsored dotage.

Designed in the 1960s and opened in the late 1970s, Davis-Besse threatens the entire Great Lakes region. Unique in all the world, another dead nuke’s vessel closure head (from Midland, Michigan) was pasted in, failed, and was then replaced yet again within a ramshackle shell now thoroughly cut, cracked and compromised by cold weather, malfeasance, uncaring incompetence and more.

In short, Davis-Besse is being run by owners who believe—with good reason—that they can get away with anything.

Perhaps that’s because, should it blow, FirstEnergy is shielded by federal law from virtually all liability for downwind financial, ecological and human health damage, which would be incalculable.

So now the company wants the public pay still more billions to keep Davis-Besse operating, no matter the consequences.

The project would have created hundreds of jobs while reviving depressed communities along the route. A Wall Street multi-millionaire, Kasich has instead lavished public cash on the state’s obsolete highway system. Meanwhile the corporate-owned legislature has fought the sale of Tesla electric cars.

In 2008, Ohio adopted one of America’s most advanced green energy programs. Its sophisticated array of targets and incentives sparked a clean energy boom. Millions of private investment dollars began pouring in for massive wind, solar and conservation projects. As in Germany’s transition to green power, Ohio energy prices were poised to plummet along with greenhouse gases and radioactive waste. Thousands of jobs were on the drawing boards.

But as Koch-funded Republicans took control of the state in 2010, Ohio became the first American state to roll back its green power program. Rampant fracking has brought increased seismic activity and destroyed much of the state's drinking water.  Ohio's ancient coal burners are being propped up with public cash. Its dying nukes—Perry was the first U.S. reactor to be damaged by an earthquake—continue to operate at huge public danger and expense.

Ohio's PUC will soon decide on this latest scam to squander still more public money on its cancerous fleet of fossil/nuke dinosaurs.

If they cave once again to the corporate interests, you can officially consign the Buckeye State to the radioactive ash heap of failed technological, ecological and economic history.

Based in central Ohio, Harvey Wasserman is author of SOLARTOPIA! OUR GREEN-POWERED EARTH and edits nukefree.org.  His Green Power & Wellness Show is at prn.fm.