Ohioans Speak Out Against Fracking in State Parks 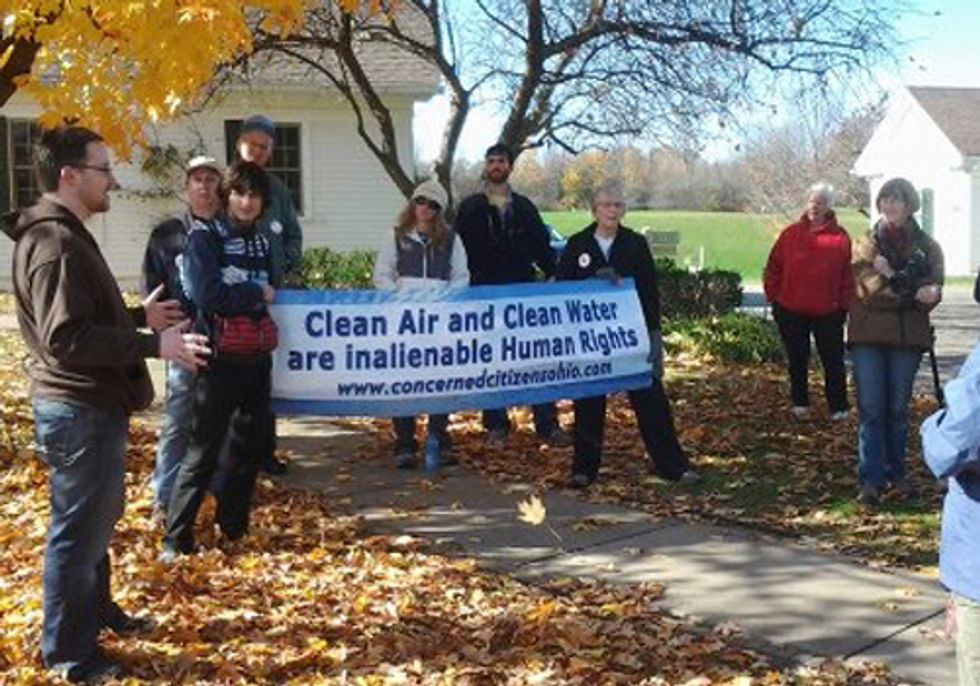 On Sunday, Oct. 21 more than 50 Ohioans converged at Quail Hollow State Park to protest the leasing and fracking of the park through a controversial legal maneuver known as “unitization.” The event, which included a hike and discussion forum, was led by the Buckeye Forest Council, Ohio Environmental Council, Sierra Club of Ohio and Mohican Advocates.

“The public had no say in the process,” said Melanie Houston, director of Environmental Policy and Environmental Health for the Ohio Environmental Council. The state legislature opened Ohio’s parks to fracking in the summer of 2011, provided that any park land at issue go through public comment and a formal review and nomination process. However, Chesapeake Energy’s special unitization order allowed the company to avoid the public input and review process. “The unitization of Quail Hollow shut out the public from the opportunity to have full knowledge of and comment on this use of their publicly-owned resource,” Houston stated.

“Ohio’s unitization law was passed decades ago to resolve disputes between oil and gas companies and was not intended to be a back door into the public’s parks,” said Nathan Johnson, staff attorney for the Buckeye Forest Council. Until the shale rush hit, the law was largely forgotten and almost never used. “The oil and gas industry has rediscovered unitization as a tool to take what it wants from an unwilling public,” added Johnson.

“Shockingly, the only legal rationale for unitization is more money for the oil and gas industry,” said Johnson. Oil and gas companies can legally force unitization if doing so is deemed “reasonably necessary” to “substantially” increase their profits.

The Ohio Department of Natural Resources (ODNR) issued a unitization order on July 10 that enabled Chesapeake Energy to force-pool a four-acre portion of the park along with land held by 23 property owners who refused to sign a lease with the company.

“The idea that Chesapeake needed Quail Hollow to substantially increase its profits is not acceptable—the four unitized acres of the park are at the extreme southeastern-most tip of a 959-acre drilling unit,” said Loraine McCosker, co-chair of the Forests and Public Lands Committee of the Ohio Sierra Club. “ODNR’s irrational decision makes the agency partly responsible for this betrayal of the public trust,” added McCosker.

“Our walk today in the woods of Quail Hollow State Park showed us the beauty that inspired the idea of setting aside land to serve as reservoirs of Ohio's natural heritage for all Ohioans to enjoy,” said Makley. “The idea of exploiting that land for short-term gain serves only to fill the pockets of the few at the expense of the many for generations to come."

The Coalition to Protect Ohio's Parks envisions an Ohio where our state parks and public forests are forever kept as places free from industrial development so that they may continue to serve as reservoirs of biodiversity, natural beauty and recreational opportunities.