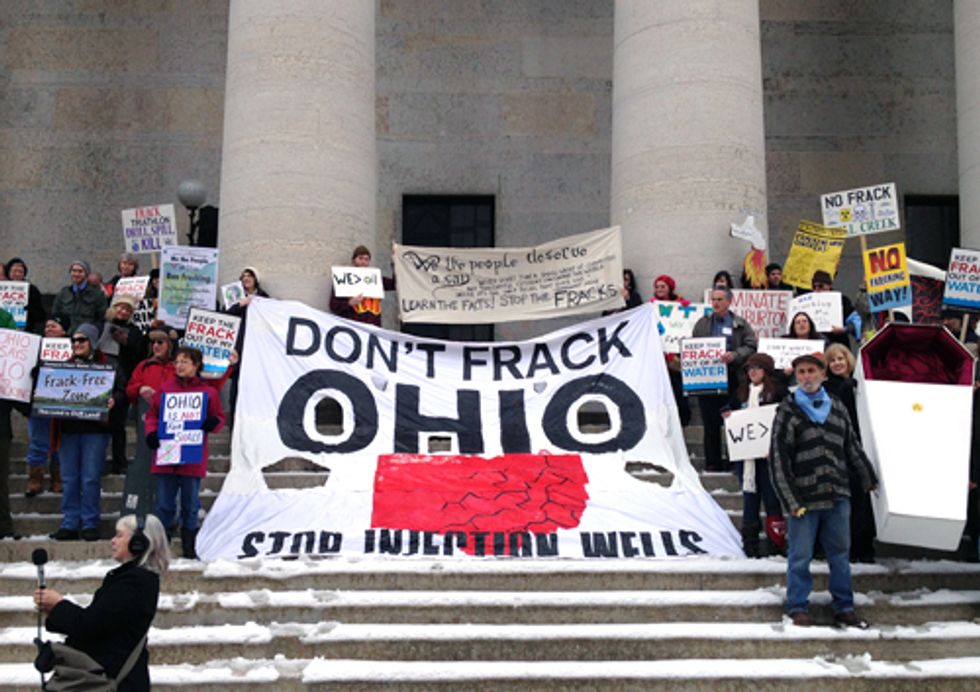 Citizens from across the state converged on the Ohio Statehouse today to lobby for legislator support of proposed legislation that would protect Ohioans from the effects of hydraulic fracturing or fracking.

The groups pressured Governor Kasich and lawmakers to act on key pieces of legislation related to fracking, including an upcoming bill that bans fracking waste from being injected underground. Ohio has quickly become a dumping ground for toxic fracking waste, which has been found to contain carcinogenic and radioactive ingredients. Ohio citizens are asking lawmakers to co-sponsor and move upcoming legislation that would ban oil and gas liquid waste from being injected underground, spread on Ohio roadways and discharged from treatment plants into Ohio’s waterways.

“With many new injection wells being permitted in our communities and a new large-scale frack waste transfer facility in New Matamoras poised to accept frack waste barged down the Ohio River, Appalachian Ohio is on the front lines of the oil and gas industry's assault on rural communities," said Athens County resident and activist Madeline ffitch.

"State regulators ignore us, out-of-state industry seeks to prey on us. But we who live in the beautiful hills and valleys of Southeast Ohio are standing up and saying ‘no.’ We are building a strong coalition of farmers, landowners, nurses, business owners, teachers, families and other rural community members. Appalachian Ohio is proud to send a strong message to industry: We will use every available strategy, including direct action, to stop our communities from being turned into environmental sacrifice zones.”

Further, citizens are calling for amendments to Governor Kasich’s budget bill to cut language that would allow hazardous and radioactive waste to be disposed of in any landfill in the state. The changes to regulating radioactive waste from fracking proposed in the Governor’s budget represent an unprecedented increase in the allowance of radiation buried in landfills not equipped to handle the material.

“Just like last year’s energy bill was a handout to the oil and gas industry, the Governor is using this year’s budget bill to issue more handouts,” said Alison Auciello of Food & Water Watch. “This time, it’s an unprecedented move to allow fracking’s radioactive waste to go into any landfill in the state. This is a dangerous prospect, sure to leave a toxic legacy, and should immediately be removed from the Governor’s budget bill.”

Last year, Ohio passed a law preventing doctors, nurses, firefighters, EMS, police and hazmat teams from quickly obtaining life-saving information in emergencies, limiting how they can use information if they do receive it. Senate Bill 17 and House Bill 42 would give medical professionals and emergency responders complete access to chemical information and make the oil and gas industry play by the same emergency planning rules as other industries in Ohio.

Ohio physician Deborah Cowden asserted, “If I don’t know all the chemicals on the pad, I can’t treat patients adequately. Emergency responders and firefighters are at severe risk unless we know what chemicals are on the pad and where on the pad each chemical is located.”

Several communities across Ohio have passed resolutions calling for a return of local control over oil and gas activities—as they currently have over other industries—restoring authority that was taken away with legislation passed in 2004. House Bill 41 would restore local control, allowing local municipalities to decide whether and where fracking would take place in a community.

“My hometown of Mansfield, Ohio was targeted by a Texas corporation and the Ohio Department of Natural Resources as a site for high volume, high pressure toxic fracking waste injection,” said Bill Baker of Frack Free Ohio.

“Millions of gallons of toxic waste from fracking wells were to be forced into a hole in the ground with little accountability. The Ohio Department of Natural Resources is far from accountable, continually permitting wells near residential areas, watersheds, near other orphaned drill sites and on fault lines. If the residents of Mansfield had not spoken out and worked with our Law Director and City Council to stop the injection wells, we would now be receiving vast volumes of unregulated, ultra-hazardous waste at the expense of our community and for the profit of a Texas oil man.”

Echoing Baker’s sentiment that Ohio Department of Natural Resources isn’t protecting Ohioans was Susie Beiersdorfer, geologist and co-founder of the Frackfree America National Coalition based in Youngstown: "The citizens of Youngstown have first-hand experience wanting local control over the oil and gas industry. We have endured earthquakes from toxic brine injection and more recently, the illegal dumping of toxic oil and gas waste into our Mahoning River, allegedly by a company owned by Ben Lupo, who also operated the injection well responsible for the earthquakes. Ben Lupo had a previous record of over 149 violations issued by the Pennsylvania Department of Environmental Protection, 16 of which stemmed from illegal discharges into waterways, according to the Youngstown Vindicator. We no longer trust the state to solely protect our public health and safety."