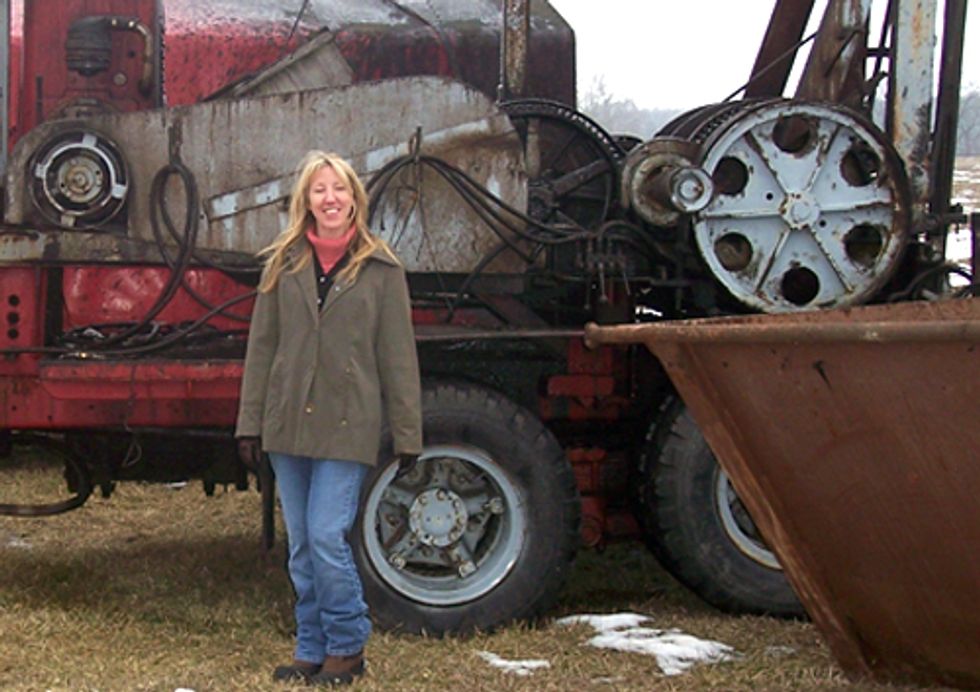 Kari Matsko launched People's Oil & Gas Collaborative-Ohio, a group that educates people about the dangers of fracking, after dealing with illness caused by drilling in her community.

As a landowner in the Marcellus and Utica shale in Ohio, I was introduced to the hazards of gas exploration in July 2006. After several days of debilitating headaches, I awoke one morning unable to move my head due to piercing pain on both sides of my neck.

I was in tears just attempting to do simple things such as get up from sitting or lying down. I was dizzy and had ringing in my ears. These symptoms lasted for months. I went to numerous doctors who found muscle spasms via x-ray but yet no diagnosis. I was in my early 30s and never had such an illness before or since then.

Unbeknownst to me, drilling was taking place about 2,500 feet from my property that week in July. I was at home day and night with the windows open during this time. I remember walking around my yard noticing an abnormal number of dead birds and moles. Signs had popped up around town for missing pets. I also saw a vehicle from the local department of health in the driveway of a home about 1,000 feet from my house.

That evening I saw neighbors on the local news stating that they evacuated their home in the middle of the night due to rotten egg fumes waking them up and sickening their children to the point they were immediately taken to the hospital. This was the same date my symptoms started. The health district and doctors' reports of the incident stated exposure to the potentially toxic hydrogen sulfide as the likely cause. Documents also noted the drilling company was ‘dry drilling’ and that they had no employees who knew how to drill using fluid which was recommended to suppress such gas escapes. I wondered how such an industry could be permissible in this proximity to homes, why no notification was given prior to it taking place and most of all why no one was evacuated.

While my symptoms eventually subsided and I hope no long term damage occurred, it was 2007 when I observed more of my neighbors clearing away sites to install oil and gas wells. I wondered why any government agency would continue to approve such reckless locations. As I researched I found that in Ohio our law was changed in 2004 to stop localities from putting health and safety measures in place around oil and gas via zoning. I also learned that the type of drill sites nearby me required injection of chemicals in order to be successful and that many were known environmental triggers for cancer and autoimmune disease.

In fact, my mom has such a diagnosis as a result of being exposed to similar petrochemical fumes. When I found that essentially no government agency had the jurisdiction to protect public health and safety due to exemptions granted to the oil and gas industry, I figured it was my civic duty to advise the community. I wrote a letter to the editor for the first time in my life in response to reading that a town nearby was considering allowing drilling on city land in close proximity to residences.

As a result of the letter to the editor, I heard from citizens around the state of Ohio with a wide range of stories dealing with irresponsible practices. Less than two months later, a home 900 feet away from a recently fractured gas well exploded in the middle of the night in my area. While the elderly couple that lived in the home survived, their house and others up to 4,700 feet away from the drill site had contaminated water wells and explosive levels of gas in their homes.

Local officials and state lawmakers directed affected citizens to me since they said their hands were tied due to the Ohio law. I had inadvertently started a grassroots movement that shared my firsthand experience and research from the past year. Together we were able to educate thousands of people about the hazards of fracking and improve Ohio’s law.

By joining together nationally, we too can reach thousands more and close federal industry loopholes to put public health and safety, and water, air and property rights above industry profits. Join us in Washington, D.C., from July 25 to July 28 to tell Congress and the Obama administration to Stop the Frack Attack!

With six years experience in oil and gas consulting and grassroots leadership Kari Matsko was selected as the Ohio environmental and public interest review team member for the State Review of Oil and Natural Gas Environmental Regulations (STRONGER) Ohio Hydraulic Fracturing State Review in January 2011. In 2012 she was appointed as the National Coordinator for MIT’s Center for Future Civic Media’s ExtrAct suite of internet-based mapping and communication technologies used by communities dealing with oil and gas development. She continues to promote the grassroots mission of public education and regulatory and legal reform via the People’s Oil & Gas Collaborative-Ohio (POGCO).