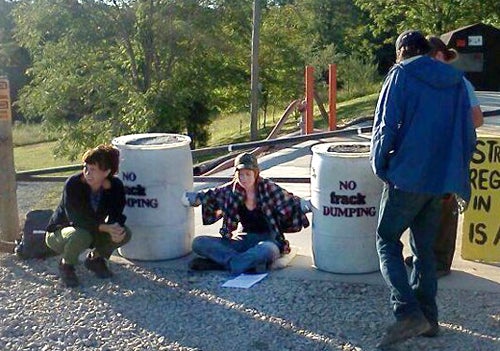 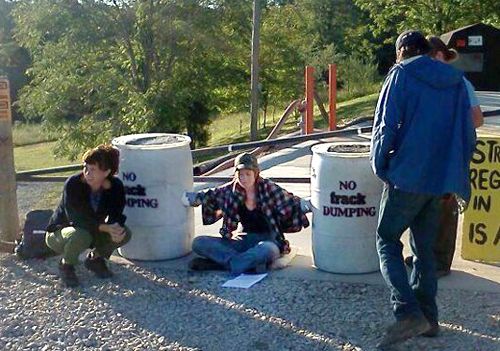 Madeline ffitch, a 31-year-old Millfield, Ohio woman who is outraged at the impact fracking wastewater is having on her community, blocked the gates to the Ginsburg wastewater injection well site on Ladd Ridge Road, west of Athens, Ohio. ffitch was arrested this morning for trespassing while locked to two 50-gallon cement filled drums, effectively shutting down the well site.

Through this protest, ffitch is demanding that the ODNR test fracking wastewater, keep out-of-state fracking wastewater from being brought to Ohio, and ask the State of Ohio to end the conflict of interest between big energy companies and state regulatory agencies.

A group of landowners, business owners, farmers and other citizens gathered to show support and held signs that read “Ohio Loves Clean Water!” and “ODNR: Test the Brine!” Police refused proximity to the scene to about 20 people and threatened arrest to anyone taking photos or gathering near the site. The police were demanding names, social security numbers and birth dates from observers who were standing across the street in the right of way. Vehicles were brought in to block views of the protester.

The ODNR has the authority to test fracking wastewater injected in these wells. Citizens have requested  this common-sense action many times, yet the ODNR continues to refuse to test the wastewater, commonly known as brine.

Nearly 148 million gallons of fracking wastewater were injected in Ohio wells last year, half of that coming from fracking wells outside of Ohio, including Pennsylvania and West Virginia.

The ODNR relies on industry-reported numbers concerning wastewater chemical content and wastewater volume. Allowing the oil and gas industry to continue self-monitoring and self-reporting is not strong regulation—it is a conflict of interest.

The ODNR gets paid by the barrel for each load of wastewater brought to Ohio, accounting for a significant portion of its budget.

SB 315, an energy bill passed in May, doesn’t provide adequate protection from fracking for Ohio citizens.

This protest comes just weeks after more than 1,000 people marched to the Ohio Statehouse opposing hydraulic fracturing, toxic wastewater injection wells, and the lack of policies that support a renewable energy future for Ohio and the U.S.