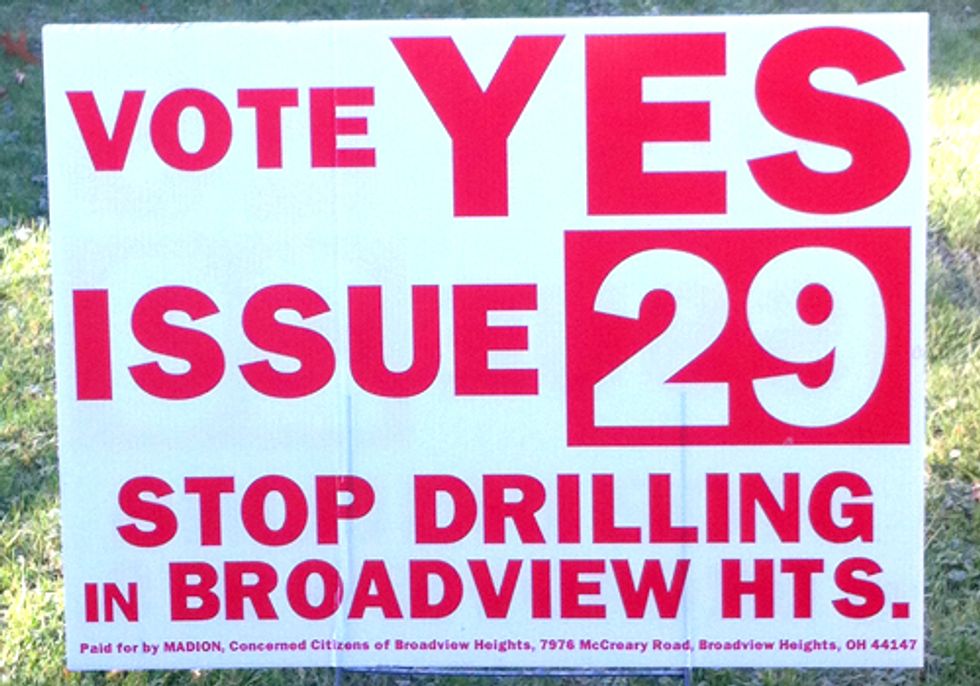 Yesterday, voters in Broadview Heights, Ohio came out in record numbers to say yes to the adoption of a Community Bill of Rights banning corporations from conducting new gas and oil drilling and related activities in their city. A similar Charter Amendment was also adopted by voters in Mansfield, Ohio by a wide margin of 62 percent yes votes to 37 percent no votes. It adds a Community Bill of Rights to the City Charter and prohibits injection wells without written city approval.

The Broadview Heights charter amendment was drafted by the Community Environmental Legal Defense Fund (CELDF) at the invitation of the community group Mothers Against Drilling In Our Neighborhoods (MADION), a group of citizens concerned about the potential effects of gas and oil drilling on their families and the environment.

Broadview Heights is the first municipality in the state of Ohio to not only include a local Bill of Rights in the City Charter, but to protect those rights by prohibiting all new  gas and oil drilling, fracking and injection wells. The Village of Yellow Springs became the first community in Ohio to adopt a local law asserting the fundamental rights of residents to clean air and water, and to protect the rights of nature. Broadview Heights’ new law includes these same provisions and was placed on the ballot through an initiative petitioning process led by MADION.

MADION co-founders Michelle Aini and Tish O’Dell commented, “It is abundantly clear that the majority of residents in Broadview Heights feel that pure water, clean air, peaceful enjoyment of home and self-government is our American right for all of our families. Now it is the responsibility of our elected officials to take action, if needed, to protect the public health and well being of each citizen of Broadview Heights if our charter is violated by a drilling company.”

The amendment survived withering attacks by Mayor Sam Alai and City Law Director Vince Ruffa. At the time MADION filed the petitions, members of the group were told that the city was considering asking the court for an injunction against placement of the question on the ballot. But after discussions with attorney Sean Kelly, representing MADION, a decision was made that City Council had a ministerial obligation to adopt an ordinance required by law to place it before the voters. Mayor Alai later wrote, “As an elected official and a strong advocate of voters' rights, council and I believe that placing the drilling ban on the ballot is the right thing to do because it is citizen-sponsored legislation and it deserves our collective consideration.”

Mayor Alai went so far as to publish editorial comments and city-underwritten position statements in opposition to the measure. In those statements the mayor argued that regulation of oil and gas extraction is the exclusive responsibility of the state and that municipalities are preempted from doing so.

“Let me be clear, if this legislation passes after a vote of the people, the community is directing this administration to refuse all future drilling in our city, despite the fact that the ban violates Ohio law and will most certainly subject us to lawsuits and expensive legal bills, since the laws that permit them to drill are solidly in their favor,” wrote the mayor.

But other city officials took a different stance. “Issue 29 and the Broadview Heights Bill of Rights, affirms that we as residents have the right to self-governance,” commented Councilwoman At-Large Jennifer Mahnic. “With more and more studies showing fracking negatively impacting a community in so many ways—including health risks, decreased home values, plus environmental damage to water and air—I believe residents have a right to say ‘no’ to drilling in their backyards.”

In fact, the Community Bill of Rights amendment does not “regulate” oil or gas extraction, as its detractors claim. Rather, it asserts fundamental rights that are beyond regulation by the state, and then protects those rights by prohibiting corporate behavior judged to pose threats to those rights. Fracking and related activities are permitted by the state and allow corporations to site drilling and injection wells against the consent of the community. The amendment recognizes the rights of community members as superior to the regulatory laws of Ohio and finds the issuance of such permits, in violation of those rights, to be an illegitimate exercise of state power.

Pat Volk, a resident of Broadview Heights and supporter of MADION, said, "I've been working on this for over three years and it is nice to get some vindication." With passage of the law, Broadview Heights joins a dozen other communities in Pennsylvania, Maryland, New York, Ohio and New Mexico that have taken a stand for fundamental rights by banning fracking or related activities.

Corporations that violate the prohibitions or seek to drill or site injection wells in the city will not be afforded “personhood” rights under the U.S. or Ohio Constitution, nor will they be afforded protections under the Commerce Clause or Contracts Clause under the federal or state constitution.

In addition, the ordinance recognizes the legally enforceable Rights of Nature to exist and flourish. Broadview Heights residents now possess legal standing to enforce those rights on behalf of natural communities and ecosystems.