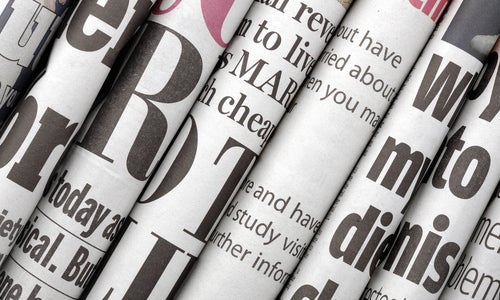 As the Ohio Senate’s members debated about and eventually passed legislation to freeze renewable energy and efficiency standards for two years, some of the state’s most-read newspapers chose American Legislative Exchange Council (ALEC) affiliates for nearly half of their interviews.

Still, none of those publications have mentioned ALEC once since April 7, according to analysis from Media Matters for America (MMFA).

That’s a little troubling considering that the legislators behind Senate Bill 310 are members of or have ties to ALEC, the secretive group that lobbies on behalf of fossil fuel interests and connects companies to legislators that will fight for laws that curtail the advancement of renewables. The group crafts model legislation and its Private Enterprise Advisory Council includes Koch Industries, Energy Future Holdings, Peabody Energy and ExxonMobil—the type of companies that see the increased deployment of renewable energy as a financial threat. 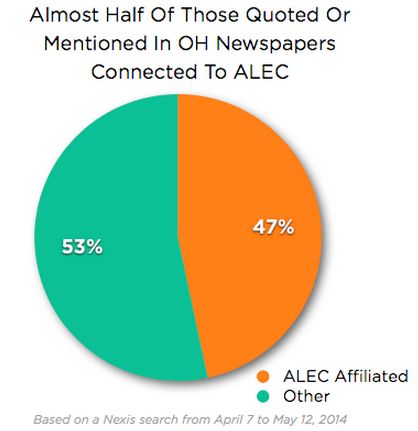 According to MMFA, the major newspapers in the state—The Columbus Dispatch, Cleveland Plain Dealer, Akron Beacon Journal and Cincinnati Enquirer—have collectively dedicated 32 articles, op-eds, and editorials to SB 310 since April 7, but none referenced ALEC. MMFA previously released a study stating that the publications also didn’t mention ALEC in March when the legislation was introduced.

It passed the state Senate May 8, and could be up for a vote within the Ohio House’s Public Utilities Committee early next week. 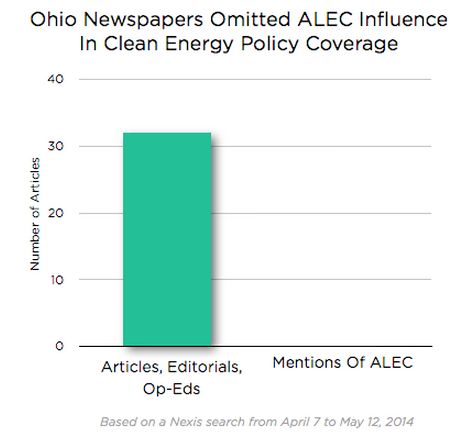 SB 310 would push final renewable energy and efficiency targets back to 2027. It would also set up a committee to review the standards during the two-year freeze. That, along with bill language regarding the intent to reduce mandates, leads some to believe the standards might not actually be reinstated in 2017.

The counsel also wants any possible study commission to review other provisions in the law that “unfairly favor utilities and increase Ohioans’ electric bills.”

Gov. John Kasich is expected to sign the bill if it passes the Ohio House. According to analysis from People for the American Way, Kasich is recognized in ALEC’s internal talking points as someone who “helped mold ALEC in its formative years.”

Ohio Sens. Keith Faber, Frank LaRose and William G. Batchelder are all ALEC members and were proponents of SB 310. Sen. Bill Seitz is known as the legislation’s loudest advocate. He is also an ALEC board member, according to MMFA.

The renewable standard, SB 221, was passed in 2008. According to a report from the Advanced Energy Economy Ohio Institute and the Ohio State University’s Center for Resilience, SB 221 has saved consumers 1.4 percent on their electricity bills, with efficiency helping to reduce demand.

Some late changes to SB 310 place no value on efficiency. While the standards are frozen, utilities won’t be required to offer incentives for energy-efficient appliances, light bulbs and more.

“There won’t be any opportunities for them to receive some help in investing in the energy efficiency of their home,” Max Neubauer, a senior policy analyst for the American Council for an Energy-Efficient Economy, told Midwest Energy News. “Those folks who don’t have opportunities to invest in their energy efficiency will be subjected to potentially higher energy bills, because over the course of these two years, it’s likely that rates will continue to rise.”