Join the Off Fossil Fuels Campaign 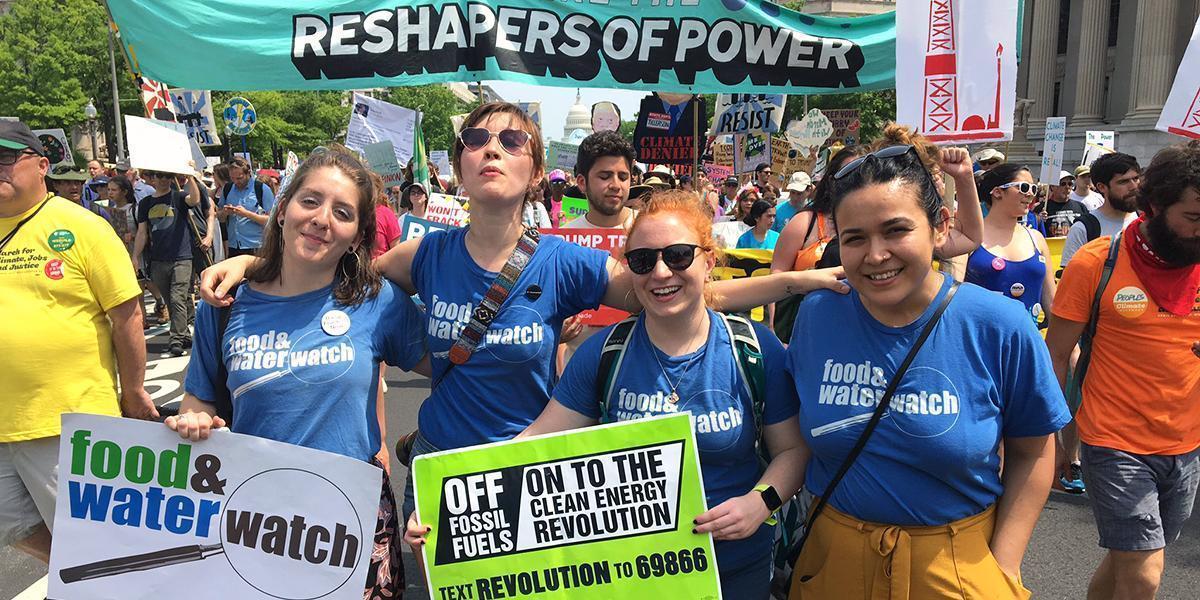 For five years, Food & Water Watch has worked to ban fracking because we’ve determined that it presents unacceptable risks to our water supply. We’ve worked alongside grassroots activists across the country—including in the states of New York and Maryland—to pass bans and other ordinances against fracking.

While Trump unleashes a chaotic maelstrom of tweets, “alternative facts” and reactionary policies upon the American public, climate change is unleashing its own chaos on planet Earth as we know it. What’s worse, the White House has brazenly appointed several climate change deniers with extensive fossil fuel industry ties to key positions in the cabinet. Their agenda appears to be burn more coal, oil and gas, not less.

Since the election, it’s become crystal clear that it’s up to us to step up and demand better from our leaders for people and the planet. That’s why Food & Water Action Fund has launched a bold new effort to get America Off Fossil Fuels by building political power, beginning at the local level. Together, we’ll cultivate climate champions in government, ban fracking, keep fossil fuels in the ground, stop dangerous pipelines and infrastructure projects and transition to 100 percent clean, renewable energy by 2035.

How Will Climate Affect Our Survival—Specifically, Our Food and Water?

We know that burning fossil fuels contributes to climate change, and a warming climate will have many impacts on society, but let’s drill down specifically to expected impacts on our access to safe food and clean water supplies—two things that are essential to our survival.

Chaos for Our Food Supply

The impacts on our food supply could be immense. Lloyds of London, an insurance industry giant, wrote in its report, Food System Shock that the global food supply is very vulnerable to uncertain climate impacts. With a global population expected to exceed 9 billion in 2050, extreme weather linked to climate change and the accompanying spread of agricultural pests and diseases could destabilize the global food supply.

Another study by the U.S. Global Change Research Program shows a warming planet would have other widespread impacts. Climate change will continue to reduce the nutritional value of our food, as rising atmospheric carbon dioxide (CO2) levels decrease the concentration of protein and essential minerals in crops like wheat and rice. Increasing risks of food-borne illness are also expected, as are increases in chemical contamination—for example, as the ocean temperature rises, we could see higher levels of mercury accumulating in fish. Adverse weather events, that will likely increase in frequency and intensity with climate change, could also harm the infrastructure that brings us our food.

Chaos for Our Water Supplies

Climate change will have a range of impacts on our ability to have safe drinking water. Aging drinking water and wastewater systems could fail under the stress of adverse weather events. Runoff from storms will also directly impact the water supply, introducing pathogens and increasing the prevalence of algal blooms. Warming waters themselves could expose us to more waterborne pathogens. And of course, climate change is increasing droughts, as well as heatwaves and floods. Globally, water supplies are already stressed—and climate change will only exacerbate those stresses.

Vulnerable Communities are Getting Hit Hardest

Low income communities, communities of color, indigenous communities and immigrants are among the most vulnerable to the impacts of climate change, and will be hit disproportionally by health and other impacts—as will people with disabilities, pregnant women and children and the elderly. The poorest communities are also the ones that are saddled with polluting fossil fuel infrastructure that not only contribute to climate change, but public health impacts locally. Climate change isn’t just an environmental issue: It’s a social justice issue.

Off Fossil Fuels: On to the Clean Energy Revolution

The scale of what’s needed is immense. Since world leaders met in Paris in 2015 to agree to limit warming to 2°C, the roadmap to getting there shows we need to act quickly. What’s more, Food & Water Watch believes we must limit warming to 1.5°C, which means our call to action must be even more urgent. To achieve this limit in temperature rise, we must achieve 100 percent renewable energy by 2035. That’s less than 18 years away.

In other words, we have less than two decades to transition to renewable energy, and we can’t afford to wait for our elected leaders in Washington to do the right thing. We must build power locally, from our city councils, to our state legislatures and beyond. While there has been good progress, with many cities making resolutions to go meet certain targets for renewables, the scale at which it must happen must ramp up.

During the Obama administration, we fought hard to protect the resources we need to sustain life. With our grassroots allies, we pushed hard to pressure the U.S. Environmental Protection Agency to recognize that fracking contaminates drinking water—and won. But now, there’s a new administration in town that is truly emboldening the fossil fuel lobby, and has a startling lack of accountability on environmental issues. It’s clear that any environmental progress we’ll make has to start at the local level—and it starts with each one of us.

We’ve learned one powerful lesson from our experience organizing alongside grassroots partners to ban fracking in states and communities across the nation: When large numbers of people come together, we can win even in the face of powerful opposition.