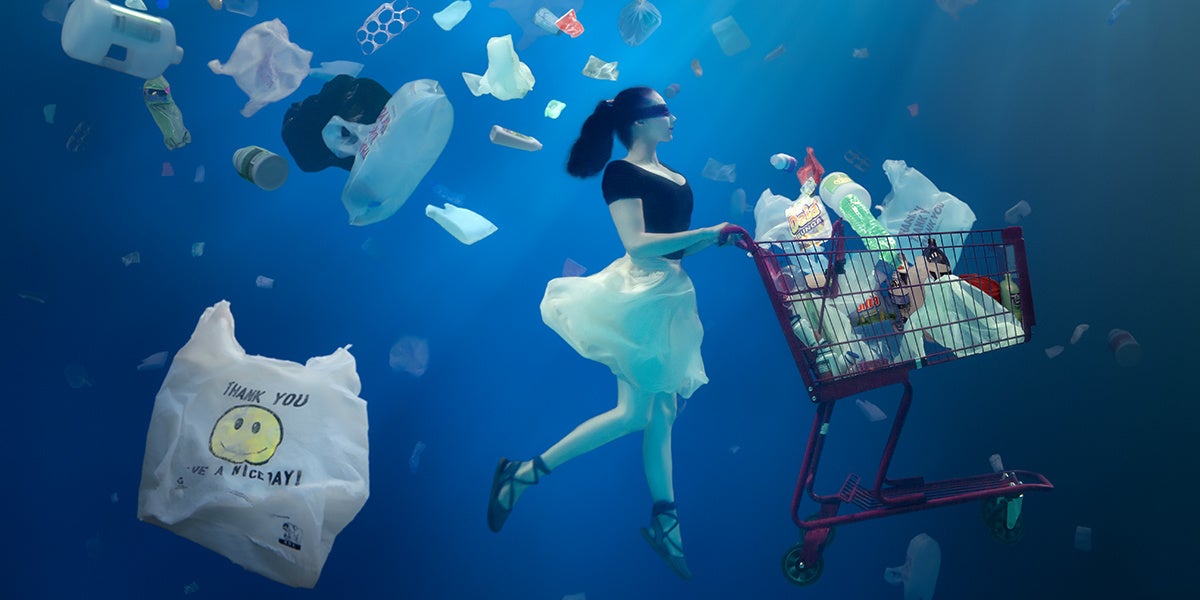 The fossil fuel era must end, or it will spell humanity’s end. The threat isn’t just from pollution and accelerating climate change. Rapid, wasteful exploitation of these valuable resources has also led to a world choked in plastic. Almost all plastics are made from fossil fuels, often by the same companies that produce oil and gas.

Our profligate use of plastics has created swirling masses in ocean gyres. It’s worse than once thought. New research concludes that the Great Pacific Garbage Patch is 16 times larger than previously estimated, with 79,000 tonnes of plastic churning through 1.6 million square kilometers of the North Pacific. That’s larger than the area of Quebec—and it continues to grow! Researchers say if we don’t clean up our act, the oceans will have more plastics by weight than fish by 2050.

The Great Pacific garbage patch is now twice the size of Texas. https://t.co/4MGzVMOUjK

The Ocean Cleanup Foundation commissioned the study, published in Nature, based on a 2015 expedition using 30 vessels and a C-130 Hercules airplane to look at the eastern part of the patch.

According to a CBC article, researchers estimate that the patch holds 1.8 trillion pieces of plastic, much of it broken down into microplastics less than half a centimeter in diameter. They also found “plastic bottles, containers, packaging straps, lids, ropes and fishing nets,” some dating from the late 1970s and into the ’80s and ’90s, and large amount of debris from the 2011 tsunami in Fukushima, Japan.

The North Pacific patch isn’t unique. Debris accumulates wherever wind and ocean conditions and Earth’s rotation create ocean gyres, including the North Pacific, North Atlantic, South Pacific, South Atlantic and Indian Ocean. There’s also one in the Arctic Ocean, although it isn’t a gyre, but an “accumulation zone,” where water from warmer areas sinks as it cools.

As the 5 Gyres organization points out, plastics are everywhere, not just in the gyres. It says the idea of a floating island of garbage is a misconception: “In the ocean, plastic is less like an island, and more like smog.”

Although some of the plastic comes from ships, most is washed from land into the seas via runoff, rivers and wind.

Scientists are conducting research into ways of cleaning up some ocean plastic, but say the only way to adequately address the problem is to stop it at its source. Marcus Eriksen, 5 Gyres co-founder and research director, told CBC that governments need to implement policies to get manufacturers to clean up their acts, “And make smarter products and think of the full life cycle; stop making something that, when it becomes waste, becomes a nightmare for everyone.”

Fossil fuels and the products derived from them have made life easier, but at what cost? We’ve only been using plastics since the 1950s, and our excessive fossil fuel use is also a relatively recent phenomenon. Putting plastics in the recycling bin isn’t the only answer either. Low fossil fuel prices and lack of profitable markets for recycled materials means a lot of plastic doesn’t get recycled, and it doesn’t biodegrade.

We don’t have to stop using fossil fuels and producing fossil-fuel-derived plastics overnight, but we can’t continue to regard the industry as the backbone of our economies and ways of life, and we must stop being so wasteful.

As individuals, we can help reduce the amounts of plastic waste in the oceans and on land by eschewing single-use items like plastic bags, drink containers, straws and excessively packaged items; by avoiding clothing made with plastic microfibers and products containing microbeads; and by choosing reusable containers or disposables made from other materials, such as aluminum, that are more likely to be recycled. Be wary of compostable plastics. Although made from plant materials, they require large industrial facilities to break them down.