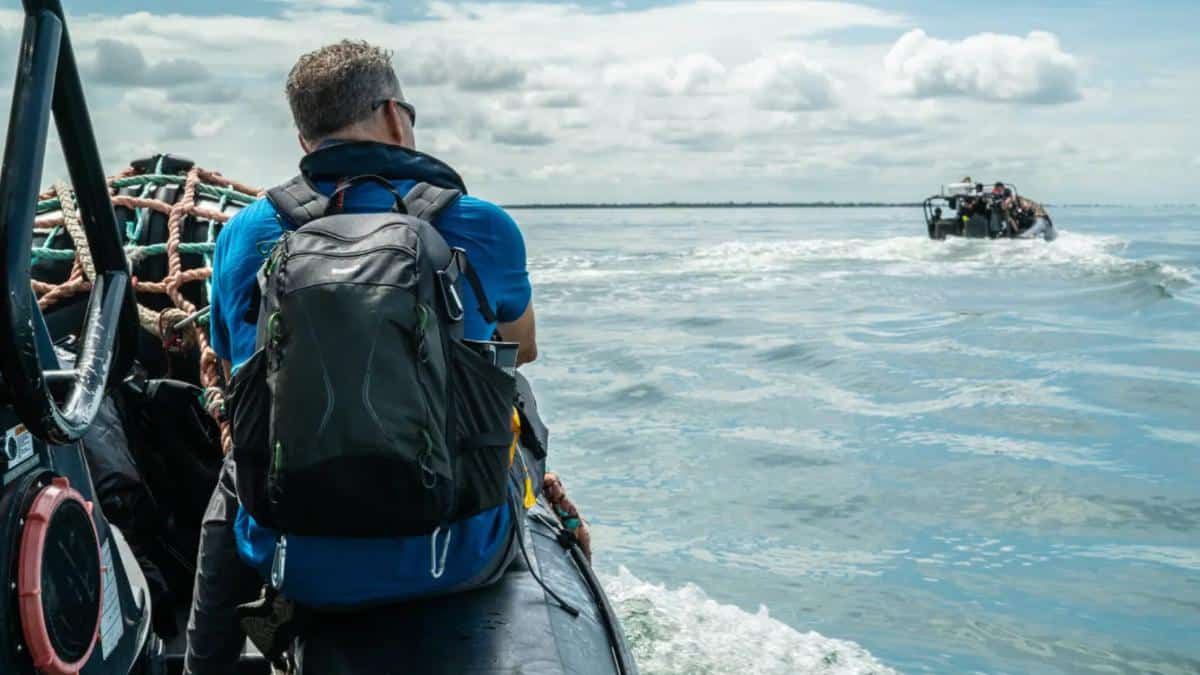 Ian Urbina patrolling on a boat in Gambia. The Outlaw Ocean Project

About 100 miles off the coast of Thailand, three dozen Cambodian boys and men worked barefoot all day and into the night on the deck of a purse seiner fishing ship. Fifteen-foot swells climbed the sides of the vessel, clipping the crew below the knees. Ocean spray and fish innards made the floor skating-rink slippery.

Seesawing erratically from the rough seas and gale winds, the deck was an obstacle course of jagged tackle, spinning winches and tall stacks of 500-pound nets. Rain or shine, shifts ran 18 to 20 hours. At night, the crew cast their nets when the small silver fish they target — mostly jack mackerel and herring — were more reflective and easier to spot in darker waters.

This was a brutal place, one that I’ve spent the past several years exploring. Fishing boats on the South China Sea, especially in the Thai fleet, had for years been notorious for using so-called sea slaves, mostly migrants forced offshore by debt or duress.

Two-thirds of the planet is covered by water and much of that space is ungoverned. Human rights, labor and environmental crimes occur often and with impunity because the oceans are vast. What laws exist are difficult to enforce.

Arguably the most important factor, though, is that the global public is woefully unaware of what happens offshore. Reporting about and from this realm is rare. As a result, landlubbers have little idea of how reliant they are on the sea or the more than 50 million people who work out there.

Forced labor on fishing ships is not the only human rights concern. Hundreds of stowaways and migrants are killed at sea annually. A multibillion-dollar private security industry operates at sea, and when these mercenary forces kill, governments rarely respond because no country holds jurisdiction in international waters. Somewhere in the world, at least one ship sinks every three days, which is part of the reason that fishing is routinely ranked as among the deadliest professions.

And then there’s the environmental crisis. Oil spills aren’t the worst of it. Every three years, ships intentionally dump more oil and sludge into the oceans than the Exxon Valdez and BP spills combined. Acidification is damaging most of the world’s coral reefs.

Most of the world’s fishing grounds are depleted. Some research predicts that by 2050, the sea will contain more plastic than fish. Overfishing, often boosted by government subsidies, means smaller catches closer to shore and an industry becoming more desperate. One out of every five fish on American plates comes from pirate fishing vessels.

Recent events have reminded the world of its dependence on maritime commerce. In the Port of Los Angeles, a COVID-induced bottleneck of dozens of cargo ships left consumers with shipping delays and deckhands idling, unable to reach the shore. In the Suez Canal, one sideways-turned ship led to a -billion traffic jam.

Despite occasional news coverage when calamity strikes offshore, reporting from this untamed frontier is generally scarce. Many news outlets have pulled back from international reporting because it is time-consuming and expensive.

The Outlaw Ocean Project, a nonprofit journalism organization, is working to fill this gap. A report we published last year with NBC News revealed the largest illegal fishing fleet ever discovered: more than 800 Chinese fishing boats operating in North Korean waters in violation of UN sanctions. These ships were accelerating the collapse of the squid stock while violently displacing local and smaller North Korean ships, with deadly consequences, as hundreds of these local fishermen were getting stranded too far from shore and dying.

But even with striking stories — about the oceans or anything else — journalism is struggling to reach younger people, who increasingly are turning to alternate sources of information from online platforms like Facebook, YouTube, and Twitter. And unless the public is engaged and interested, very little will change in terms of international policies or enforcement.

As much as we are devoted to the urgency of these ocean issues, it is clear that our investigations need to reach broad and new audiences to have impact. That’s why we combined our traditional journalism with an experiment in using music to bring people to our work.

We created The Outlaw Ocean Music Project, an effort to help disseminate and financially support the reporting. More than 480 musicians from over 80 countries have joined the project to make albums in their own style and in a variety of genres, each inspired by the stories. The music has been published on more than 200 digital platforms (including Apple Play, YouTube and Amazon), with the streaming revenue funding more reporting.

Several artists from Seattle, Washington including Quackson, Petey Mac, and Hello Meteor, have participated in the project and share a common goal of creating EPs that tell the often-overlooked stories of the sea.

The musicians use audio samples from the video footage captured during the reporting, integrating sound clips such as machine-gun fire off the coast of Somalia and chanting captive deckhands on the South China Sea. This music has had a combined reach of more than 90 million people, many of whom move from the songs to the videos and to the written reports.

The oceans are existentially important. They are the circulatory system of global commerce, as 80 percent of the world’s commercial cargo is carried by ships. They are also the lungs of the globe, serving as a carbon sink helping to clean the air while also producing half of the oxygen we breathe.

But for all its importance and breathtaking beauty, the sea is also a dystopian place, home to dark inhumanities. Too big to police and under no clear international authority, immense regions of treacherous water play host to rampant criminality and exploitation. The only way to better govern this offshore frontier, and to counter the human rights and environmental problems occurring out there, is to shine a continuous light on them. And for that, journalism — with an assist from music — has an urgent role to play.

Ian Urbina, a former investigative reporter for the New York Times, is the director of The Outlaw Ocean Project, a non-profit journalism organization based in Washington, DC, that focuses on reporting about environmental and human rights crimes at sea.