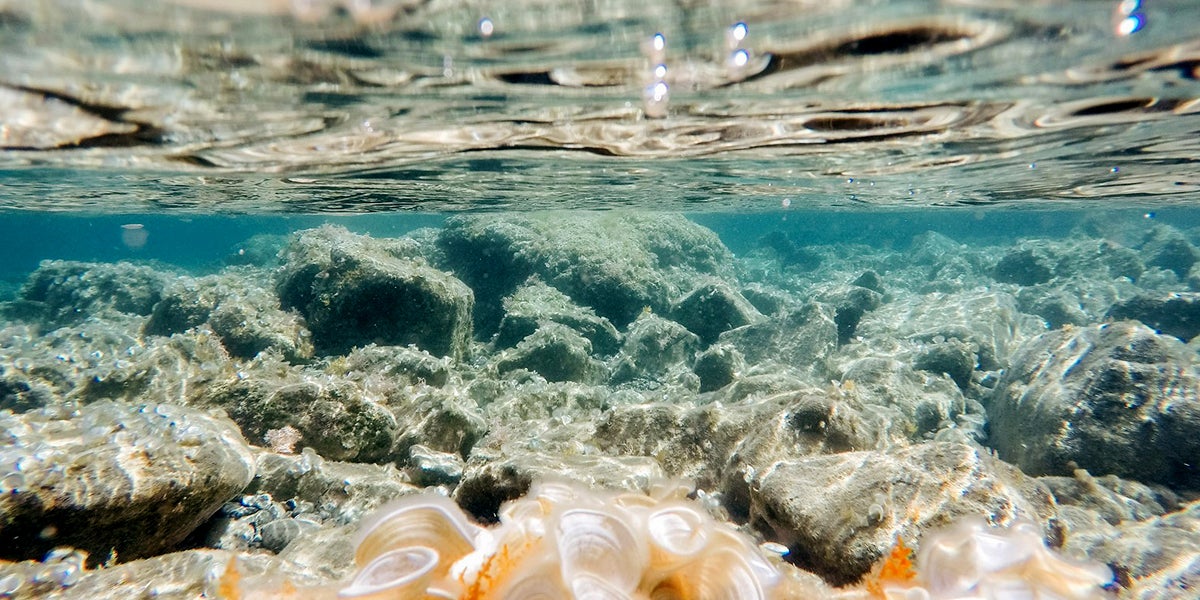 The buildup of heat-trapping greenhouse gases is warming the upper ocean four times faster than during the period 1960-1990, according to new research.

The paper, published March 10 in the journal Science Advances, is the latest effort to piece together current and historical measurements from ships, self-propelled floats, satellites and even seals to get a global picture of how the oceans are faring under rising temperatures.

Since the 1990s, more heat is finding its way to the deep ocean and there has been no change of pace in ocean warming since 1998, compared with the previous decade, the paper notes.

The study marks a step forward, but the authors said they are concerned about the future of ocean science, given the political climate in the U.S. Dr. John Abraham, professor of thermal sciences at the University of St. Thomas in Minnesota and co-author on the paper, told Carbon Brief:

“We are seeing dramatic cuts planned for climate science. There is every reason to expect these cuts will include ocean-sensing systems.”

Approximately 93 percent of the heat captured by greenhouse gases in the atmosphere ends up in the ocean. The remaining 7 percent heats the atmosphere and the land and causes ice to melt.

This means it is only by measuring the oceans that scientists can tell how fast the planet is heating and how much it will heat in the future, Abraham told Carbon Brief:

“If you want to know about global warming, you really have to understand ocean warming.” But accurately working out how quickly the oceans are warming is a difficult task, partly because of gaps in the historical data. Abraham told Carbon Brief:

“Measuring the oceans is challenging because you need enough sensors, in enough locations, for a long enough time to get a picture of the climate.”

Early observations were typically done by commercial and scientific research ships, which means they were limited to developed countries and along shipping routes, the paper explains.

In the 1990s, the World Ocean Circulation Experiment greatly expanded the coverage of ocean temperature records. Since 1992, satellites have helped to infer ocean warming from changes in the height of the sea surface, since seawater expands as it warms.

The quality of ocean measurements stepped up a gear after 2005, with the introduction of ARGO floats, a network of nearly 4,000 free-floating buoys measuring temperature in the top 2,000m of the world’s oceans.

Map showing the global coverage of the ARGO network and positions of floats that have delivered data within the last 30 days.ARGO

To get a global picture of what’s happening across the huge expanse of global ocean, scientists combine measurements from the ARGO network, ship-based observation systems, buoys tethered to the seafloor and even temperature sensors attached to the heads of seals.

While there is a wealth of data post-2005, there are gaps before then that need filling in.

Scientists typically do this by making a best guess based on measurements taken at other locations nearby. The new study updates this approach, said Dr. Lijing Cheng, associate professor at the Chinese Academy of Sciences and lead author on the paper. He told Carbon Brief:

“Our study offers a new method to solve these problems.”

Instead of including stations within 800km of the missing data point, as other studies have, the authors extends this to 2,500km to account for the often greater distance between historical stations. This left fewer gaps unfilled and more ocean accounted for, the paper explains.

The authors were also able to correct for past studies that may have underestimated warming by comparing good data from the ARGO era with sparse observations for the same region taken in the 1960s or 1970s. Prof. Kevin Trenberth, a senior scientist at the U.S. National Center for Atmospheric Research and co-author on the paper, told Carbon Brief:

“It has been amazing how much we have been able to recover in terms of information about ocean heat content from sparse past data.”

The new method left the scientists with better-than-90 percent coverage of the oceans from the late 1950s to 2015 and from the sea surface all the way down to a depth of 2,000m.

The study shows the oceans warmed relatively slowly before 1980 and faster since then. The black line in the graph below from the paper shows how the pace picks up after 1980.

The authors say in the paper that their new estimate is “somewhat greater” than previous reports, including the latest report from the Intergovernmental Panel on Climate Change (IPCC).

“The paper represents an important refinement to our estimates of ocean heat content change … While the study does not alter our basic understanding, it does suggest that IPCC AR5 reported rates of ocean warming were underestimated by about 10-15%.”

Increasingly sophisticated ways to keep tabs on the oceans allow scientists to pinpoint, not only how much heat enters the oceans, but also where it goes when it gets there. 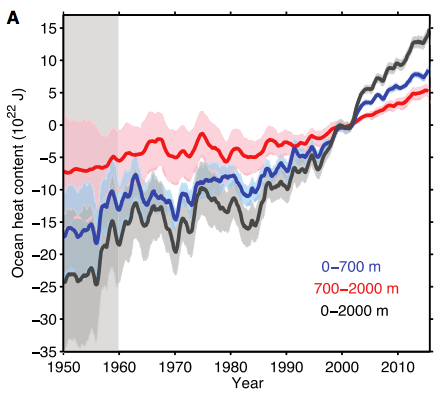 Despite what the study calls a “surge” in research into whether global temperature at the Earth’s surface slowed down temporarily in the late 90s and 2000s, the paper is clear that no such change of pace has happened in the oceans. It says:

“Our studies show that there has been no slowdown in global ocean heat content change since 1998 compared with the previous decade.”

Looking at solely surface temperature over a decade or so is not a reliable way of to track the rate of global climate change, said Palmer:

“Since ocean heat content continued to increase at a time when the rate of global surface temperature rise slowed down, we can infer that a large part of the ‘slowdown’ must have originated from ocean heat re-arrangement.”

“The Atlantic Ocean and the southern oceans are the major new heat reservoirs (59%) even though their total area is just 48% that of the global ocean.”

Overall, about 32 percent of the extra heat absorbed by the ocean between 1960 and 2005 found its way to the deep ocean. Over the past decade, however, this proportion jumped to 49 percent, indicating that the deep ocean is playing an increasingly important role in ocean warming.

Finally, the authors combined their estimate of heat taken up by the oceans between 0-2,000m with a previous estimate of warming below 2,000m.

They found a good match with how much heat they would expect to find in the oceans as a whole, based on the amount of solar radiation entering and leaving the atmosphere since 1985. (Compare the yellow line in the graph below with all of the different shades of blue combined).

This means the mystery of the “missing heat” posed by Trenberth a while back is now effectively solved, suggested Palmer. 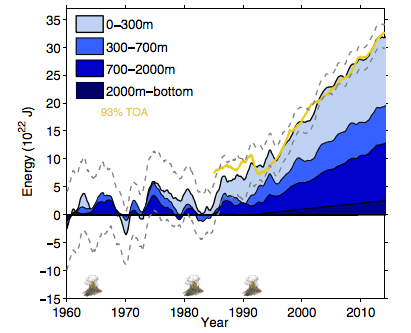 Despite the fact that ARGO floats are largely to thank for having such detailed information about the oceans, the scientists behind the study fear for the future of the network. Abraham told Carbon Brief:

“I am not confident that we will have continued coverage. The current system uses state-of-the-art sensors that are spread out across the oceans … It is not clear that there will be continued funding for this absolutely crucial system in the current political climate in the U.S.”

“If NOAA cuts back so do others—and it all goes downhill … Argo is still a research enterprise, not an operational one. It is vulnerable. Such a cutback would be a travesty.”