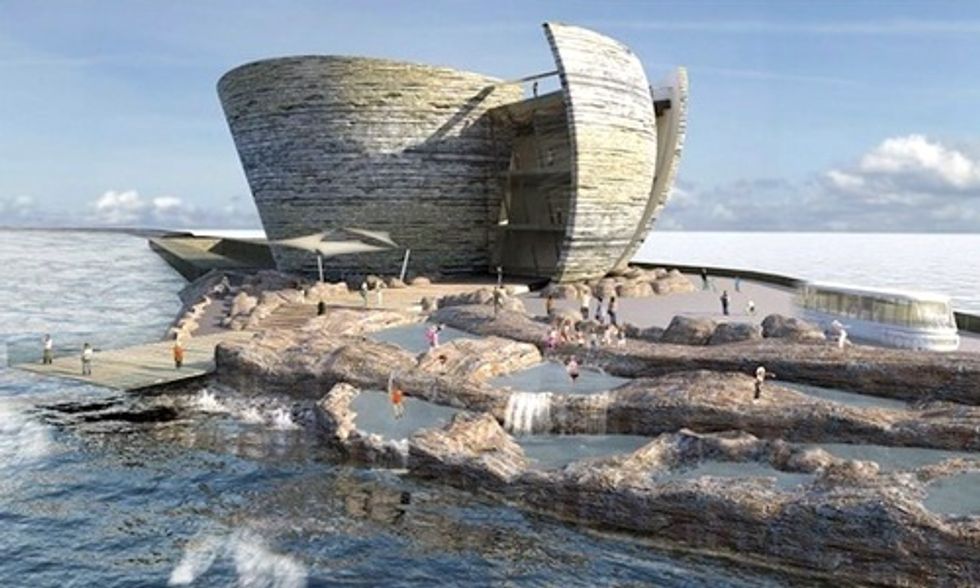 While the power plant below looks more like a gorgeous get-away than a solution to man’s energy needs, its benefits extend far beyond its beauty. As Reconstruct reports, the Swansea Bay Tidal Lagoon will use the rise and fall of ocean tides to generate enough renewable electricity to power 155,000 homes for 120 years.

The Swansea Bay Tidal Lagoon will use the rise and fall of ocean tides to generate enough renewable electricity to power 155,000 homes for 120 years. Photo credit: Juice Architects

Though not completed at present, when the structure is finished, it will produce enough electricity to displace more than a quarter million barrels of oil each year—while leaving virtually no carbon footprint.

Power plants have been generating electricity from the oceans’ tides since 1966, but the Swansea Lagoon is the first to employ a radically new method.

How Does It Work?

It’s nearly six-mile-long barrier wall will enclose a huge amount of water in an artificial “tidal lagoon.” This lagoon captures and holds seawater at high tide. As the tide goes out, water in the 4.5 square mile lagoon will be as much as 27 feet higher than the water outside its walls. This immense pressure will be routed through 26 turbines, flooding out to sea until the water level equalizes on both sides of the lagoon.

The flow is reversed at high tide, keeping the sea out of the lagoon until it reaches maximum height. Then water is let go, so it may rush through the turbines until it again fills up the lagoon.

To put it into perspective, the amount of water rushing through the turbines would fill 100,000 Olympic swimming pools each day.

The Swansea Bay Tidal Lagoon will crank out clean energy as well as be used as a sports arena, aquaculture farm and seaside sculpture garden, reports GoodNewsNetwork. Its aquaculture farm will grow oysters, kelp and other local sea crops.

In addition, the lagoon can be used as a giant arena for sailing and cycling sports.

The designers of the fabulous structure plan to implement sculptures that appear to disappear into the water or rise out of it as the tides roll in and out.

Its location at Swansea, Wales was chosen because it has some of the highest tide differences in the U.K. This will maximize the amount of water that can be used to turn turbines and generate the 420-gigawatt hours per year.

Plans for the structure were approved by the UK Energy Ministry in June, and construction is expected to begin sometime in 2017.

The builders are presently bargaining to exchange the $1.5 billion price tag (subsidized by the government for 35 years) for approval on two more tidal lagoon plants at Cardiff and Newport.