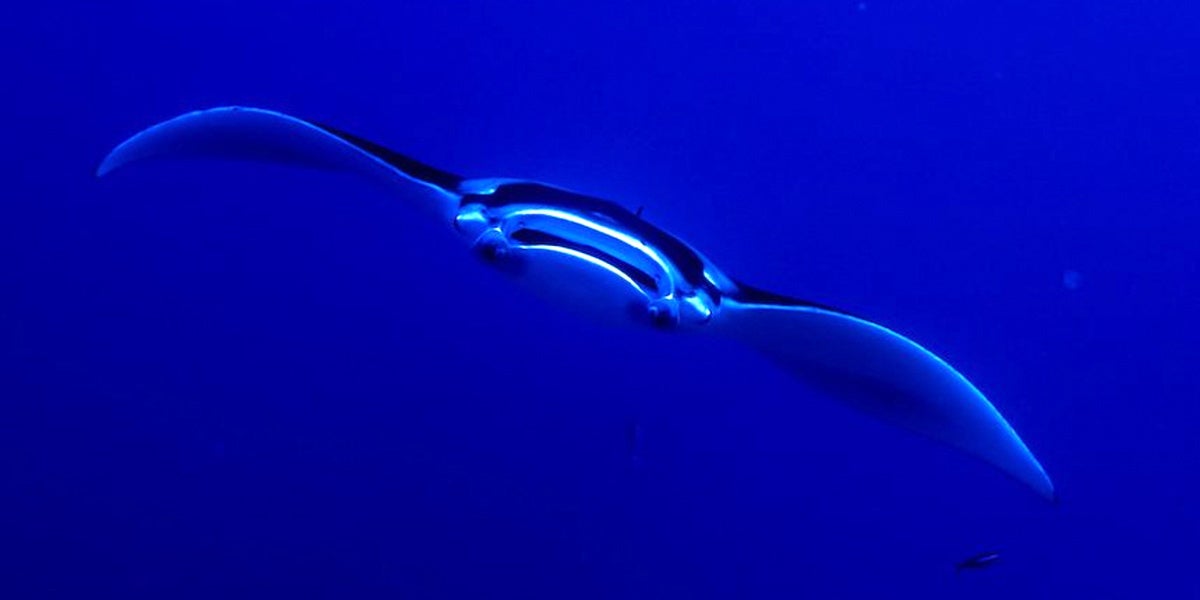 By Douglas McCauley and Paul DeSalles

(The views expressed are those of the authors, not necessarily Mongabay.)

In our 2015 ocean top 10 list, we celebrated the adoption of the Paris agreement as a monumental achievement for slowing the warming, acidification and deoxygenation of our global oceans. In 2017, remaining nations like Afghanistan, Nicaragua and Syria ratified the agreement, bringing the total number of ratifying nations to 171. But in a radical about-face of global leadership on climate action, the Trump administration officially declared that the U.S. would withdraw from the Paris agreement, citing unfair impacts on the American economy. 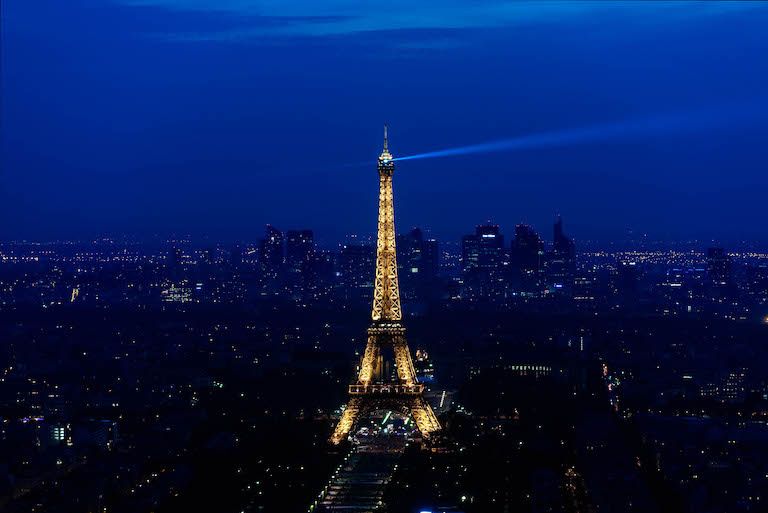 The Eiffel Tower in ParisJoe deSousa via Pexels

2. Most Expensive Hurricane Season Ever

Perhaps the most apropos follow-up to the item above on this top 10 list is hurricanes. This year’s hurricane season yielded a total of 17 named storms and 10 hurricanes in the Atlantic, with three Category 4 storms hitting the U.S. for the first time on record. In aggregate, disaster modelers assessed damages from 2017’s hurricanes at just over $200 billion—the most expensive season on record for the U.S. While no single hurricane can be attributed directly to climate change, observed increases in overall hurricane activity and intensity in the Atlantic may be linked to climate change. 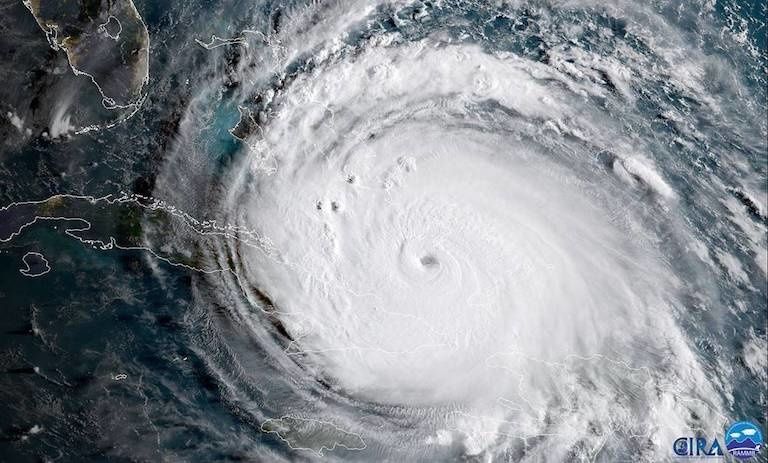 Experimentally colored satellite image of Hurricane Irma as it passed the eastern end of Cuba on Sept. 8, 2017 NOAA/CIRA

2017 saw the launch of a bold and desperate collaborative plan, VaquitaCPR, to save the very small and very endangered vaquita porpoise from extinction. With perhaps only 30 vaquita (Phocoena sinus) left on Earth, VaquitaCPR spent months attempting to capture members of the elusive species with the aim of keeping them safe and perhaps breeding them in captivity until the danger of extinction had passed. But after the death of a captured vaquita, the VaquitaCPR team ended the program and called for renewed focus on enforcing a Mexican ban on gillnets, the leading cause of vaquita deaths in the animal’s tiny home range in the upper Gulf of California. 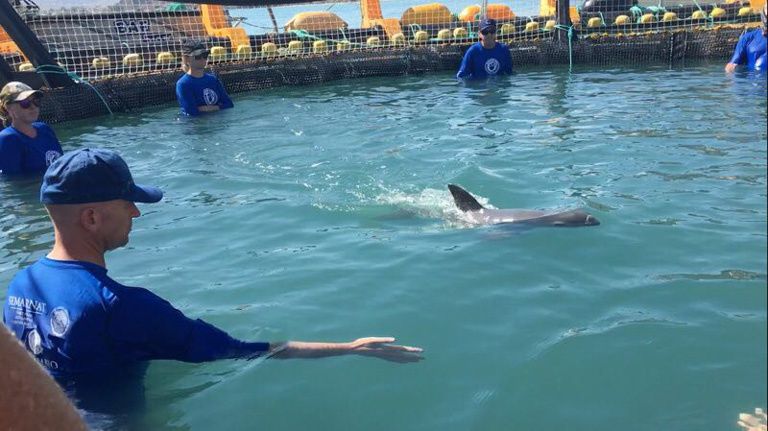 This year brought a number of notable advances in our understanding of how plastic pollution is affecting our oceans, as well as a surge in action to address this growing threat to ocean health and human health. This summer, researchers produced the first global assessment of all mass-produced plastics ever manufactured. They concluded that a whopping 8 billion metric tons of virgin plastics have been produced to date. Perhaps even more alarmingly, they determined that only 9 percent of our global plastic waste is recycled, an issue that may be exacerbated by China’s announcement this summer that it would drastically curtail the import of plastics and other waste for recycling. On the bright side, philanthropists, celebrities and the United Nations created a series of exciting campaigns to reduce single-use plastics and innovation prizes to reduce plastic waste. On the policy side, 2017 also saw California ban carry-out plastic bags, many states in Malaysia ban Styrofoam products, and Kenya enforced a nationwide ban on plastic bags. 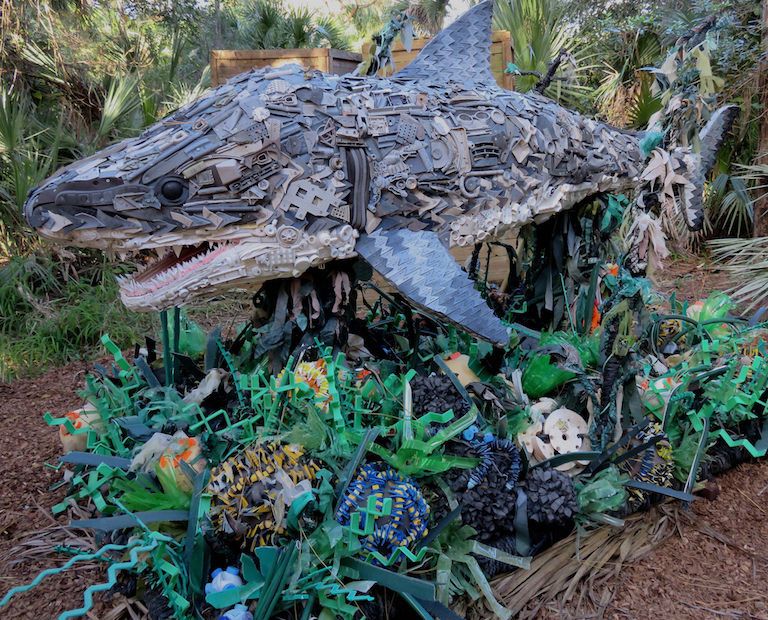 At some point between July 10 and 12, 2017, a chunk of ice weighing more than a trillion metric tons broke free from the Antarctic Peninsula. While this particular calving event did not raise the sea level, there is great interest in what events like this may mean for the future of the Antarctic ice sheet and global sea-level rise. It remains to be seen whether the calving of the iceberg known as A-68 is a “normal” calving event or if it instead foretells the weakening or collapse of the Larsen C ice shelf to which it was once attached. 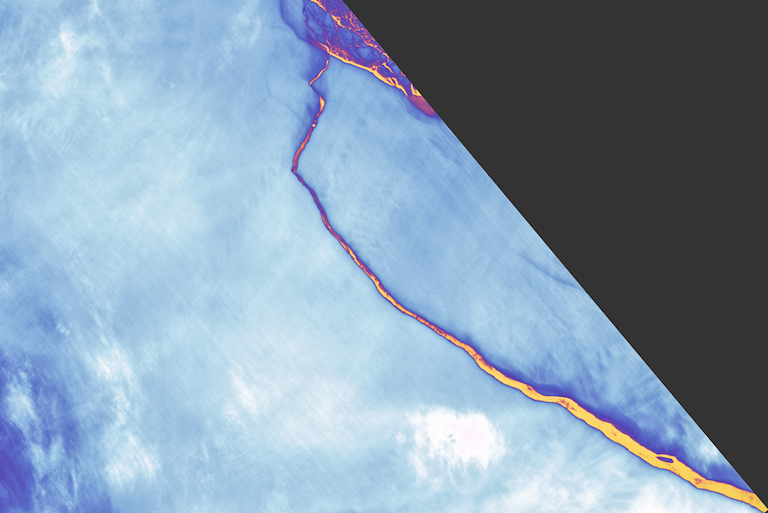 On July 12, 2017, the Landsat 8 satellite’s Thermal Infrared Sensor captured this false-color image of iceberg A-68 breaking away from Antarctica’s Larsen C ice shelf. Orange shows the warmest areas, particularly the crack between the iceberg and the ice shelf.NASA

In a year of yin and yang, marine researchers made exciting advances in our technological capacity to observe from space how people are impacting oceans, and in so doing learned more about just how dire the scope is. In one notable 2017 study, for example, researchers developed techniques to use flocks of new shoebox-size satellites and documented that military base construction in parts of the South China Sea had led to the reduction of regional coral reefs by up to 70 percent. 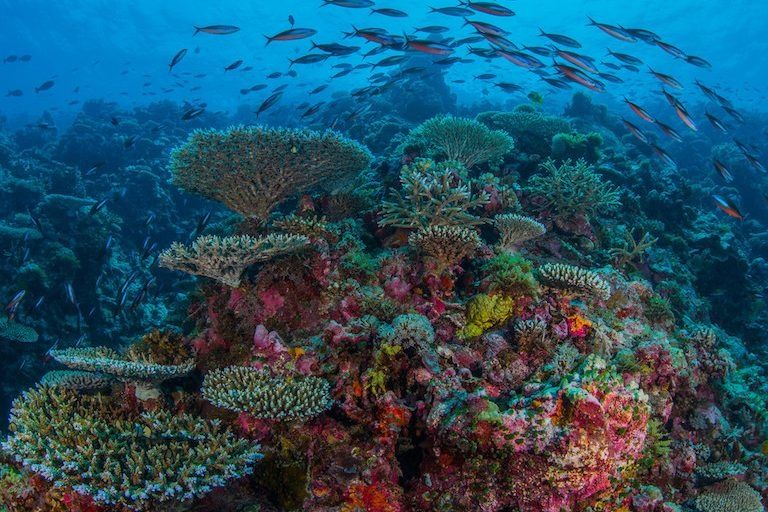 This was also the year that humans broke ground on the world’s first large-scale mineral extraction project in the ocean. The project, led by Japan, was launched 70 nautical miles (130 kilometers) from the island of Okinawa at a depth of about 1,600 meters (5,250 feet) near an inactive hydrothermal vent. Japan plans to begin commercially mining this site for ore that includes zinc, gold, copper and lead by 2020. The activities of mining vessels associated with this project, along with all seabed mining exploration worldwide, can now be tracked online. Also of note this year, the International Seabed Authority made important advances in developing a global Mining Code for the high seas, taking the world a step closer to bringing full-scale seabed mining into international waters. 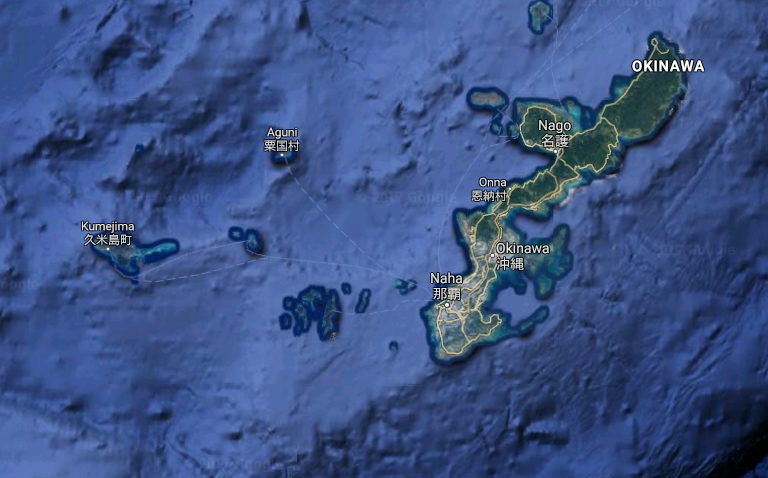 Historically, thick ice has prevented commercial fishing in the central Arctic Ocean. However, recent accelerated loss of summer sea ice has raised questions about the future of fishing in these delicate polar regions. In a prescient move, nine countries and the European Union agreed in late November 2017 to make the central Arctic Ocean off-limits to fishing for at least 16 years until more can be learned about the ecology and sensitivity of potential fisheries in the region. 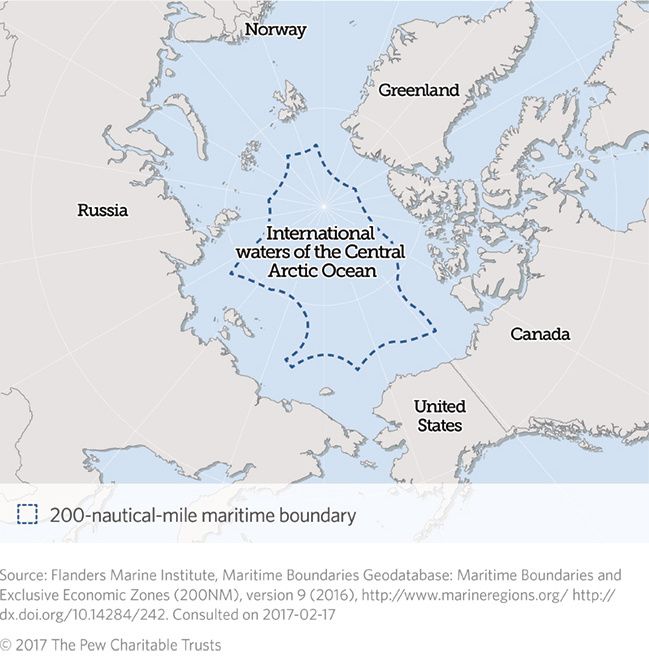 Another bright spot in 2017 ocean news was the establishment of massive protected areas in the ocean. Mexico created a protected area larger than Greece around a series of volcanic islands in the Revillagigedo Archipelago that host manta rays, sharks and sea turtles. The government of Chile and the people of Rapa Nui confirmed the establishment this year of an even larger marine protected area, roughly the size of the Chilean mainland, that was first announced in 2015. And the Mongolia-size Ross Sea Marine Protected Area near Antarctica, established in 2016, came into force on Dec. 1. 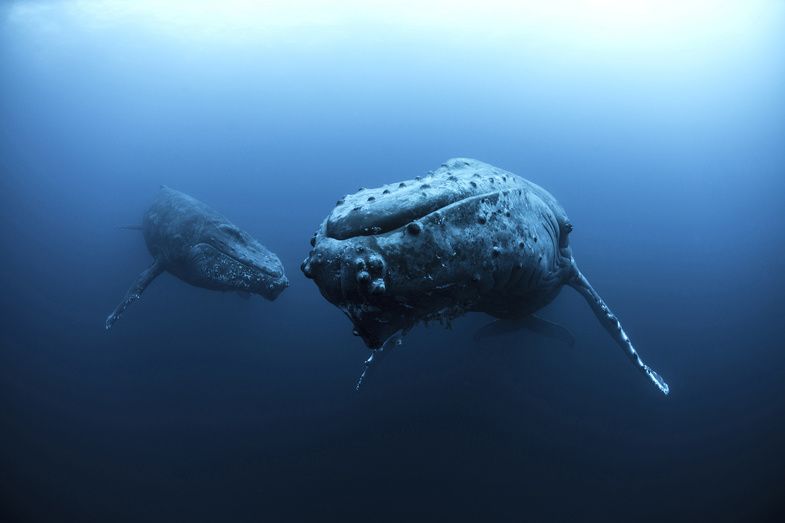 10. Steps Toward a High-Seas Treaty

This year saw the United Nations take promising steps toward safeguarding marine life on the high seas, the immense stretches of open water beyond countries’ jurisdictions that comprise two-thirds of global oceans. In July, a UN planning committee officially recommended that treaty negotiations begin. To close out 2017, on Dec. 24 the body resolved to kick off the treaty-negotiation process and planned a series of four meetings between 2018 and mid-2020. The treaty’s final text is anticipated by late 2020. Hopefully this process will lead to the adoption of improved strategies and the creation of new policy tools, such as internationally sanctioned protected areas, that will help protect high-seas biodiversity. 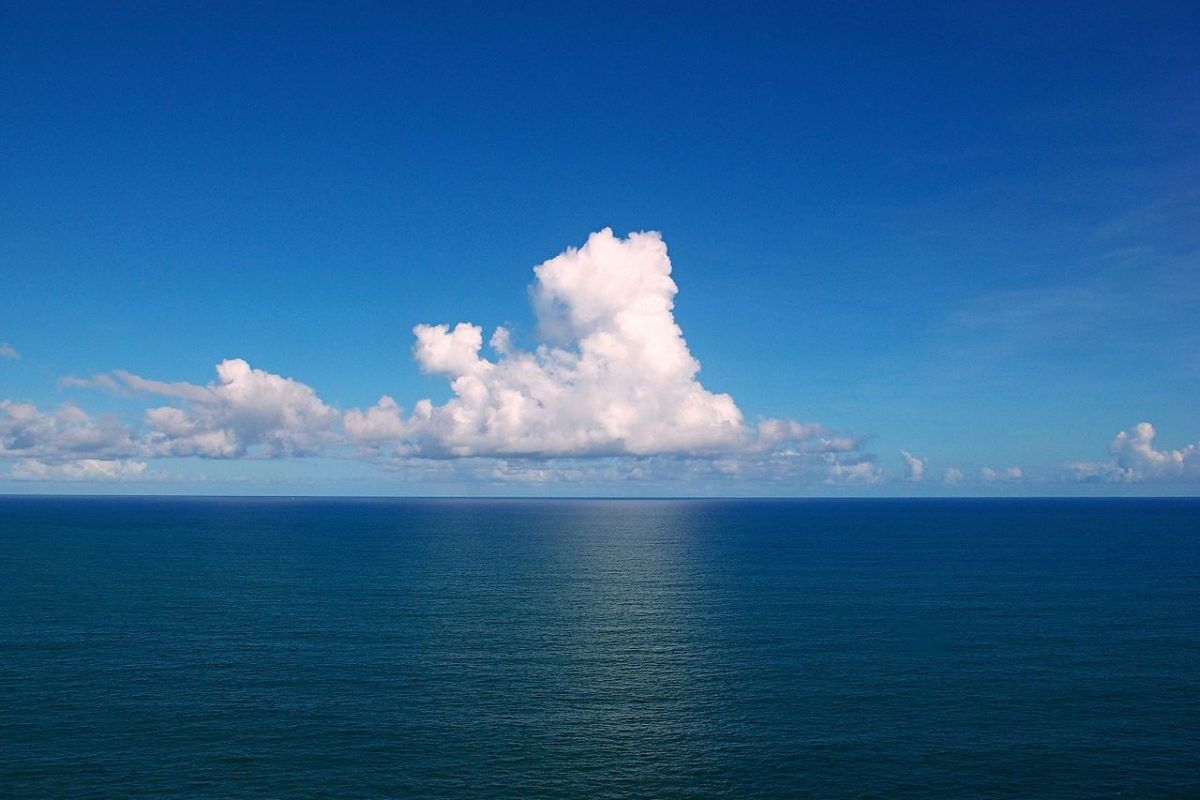