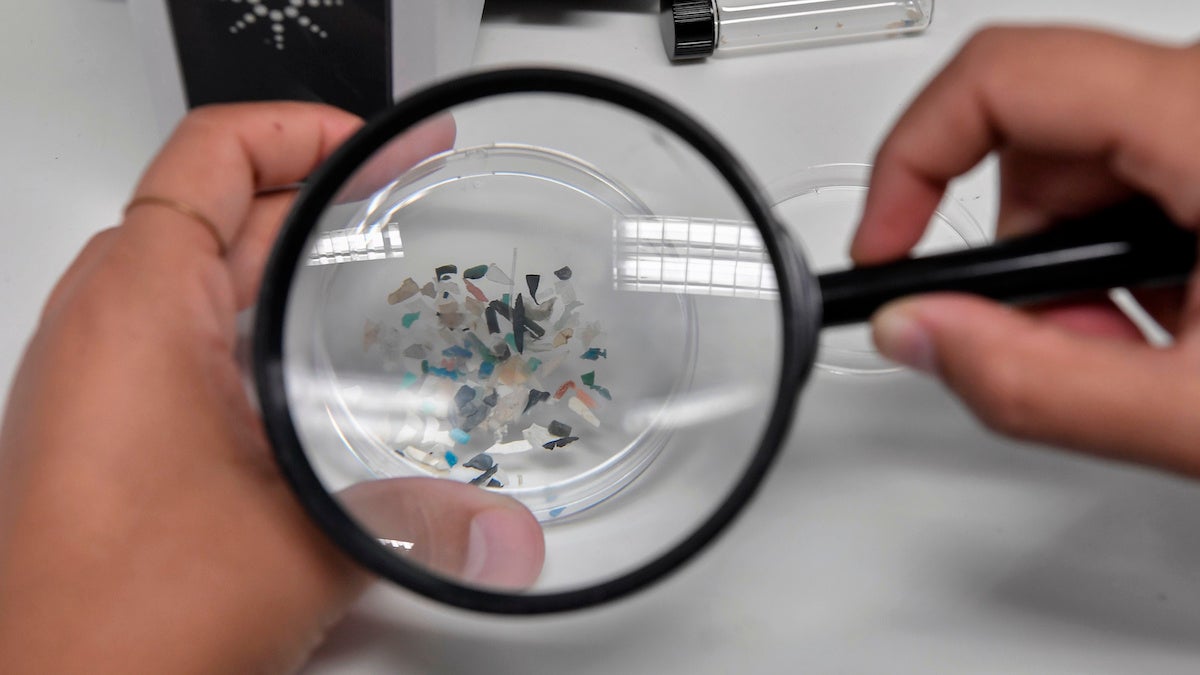 A biologist looks at microplastics found in sea species at the Hellenic Centre for Marine Research near Athens, Greece on Nov. 26, 2019. LOUISA GOULIAMAKI / AFP via Getty Images

New research suggests there may be far more microplastics in the ocean than initially estimated.

Microplastics, which breakdown into miniscule pieces of plastic are notoriously tricky to catch. Their small size allows them to get buried in ocean sediment and to escape through nets.

Now, a team of researchers, led by scientists at the Plymouth Marine Laboratory in England, used a finer net to get a more accurate picture of the amount of plastic in the ocean. Their research suggests the seas may be holding as many as 125 trillion microplastic particles, according to the study published in the journal Environmental Pollution, as Newsweek reported.

Microplastics are usually defined as tiny pieces of plastic that measure less than five millimeters across. However, despite the abundance of microplastics in the ocean, scientists have actually had a difficult time quantifying and classifying them. Usually, researchers gather samples with nets with a mesh size of 333 micrometers, or 0.333 millimeters, but these do not account for smaller pieces of plastic debris, as Newsweek reported.

The Plymouth Marine Laboratory scientists, along with researchers from the University of Exeter, used nets with a mesh size of 100 micrometers, or 0.1 millimeters, to get a more accurate picture of the microplastics swirling around coastal waters, according to a University of Exeter press release.

“It is quite well known what impact larger pieces of plastic have on marine animals, like turtles eating plastic bags mistaking them for jellyfish, but we wanted to know if microplastics are a problem to smaller marine animals like mussels or zooplankton,” said Pennie Lindeque, lead author of the study from Plymouth Marine Laboratory, to Newsweek.

“However, first we needed an accurate picture of how many small microplastics there are in the sea, and what sort of plastic they are. We are interested in really quite small microplastics—around 100 micrometers in size, similar to the width of a human hair—and suspected that the standard sampling methods using a net with pores about 333 micrometers in size, wouldn’t give an accurate picture.”

“There is often a mismatch between the number and type of microplastics used in experimental studies and those found in the natural environment,” said Rachel Coppock, Marine Ecologist at Plymouth Marine Laboratory and a co-author on the study, in a statement. “This study confirms that microplastic concentration increases with decreasing size and also provides a framework for determining microplastic concentrations in exposure studies, particularly with animals such as zooplankton that eat micron-sized food.”

The researchers focused on coastal water since that is where microplastics are likely to have the greatest impact on marine life. They sampled the water on both sides of the Atlantic, choosing a spot off the coast of Maine and another in the English Channel, according to Newsweek.

“I was surprised at the extent that we had been underestimating the microplastic abundance in the marine environment; I was also surprised how consistent the results were on both sides of the North Atlantic, the eastern seaboard of the U.S. and the southwest coast of the UK,” Lindeque told Newsweek.