2017 Was the Hottest Year on Record for Oceans 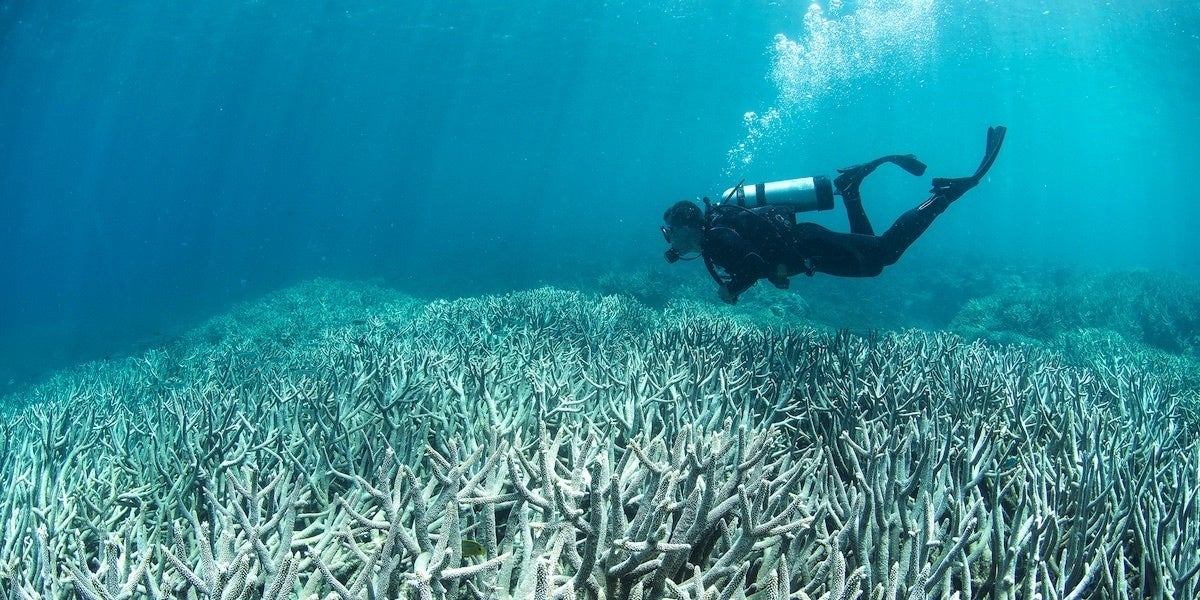 Last year wasn’t just one of
the hottest years on Earth’s surface, as it was the hottest year on record for the global ocean, according to a new study from the Institute of Atmospheric Physics (IAP)/Chinese Academy of Science.

Researchers Lijing Cheng and Jiang Zhu found that the top 2,000 meters of ocean waters are hotter than ever recorded, at 19.19 × 10^22 J. Heat energy is measured in Joules (J).

Ocean heat in 2016 was cooler than both 2015 and 2017 due to a large El Ninõ event that year, which takes heat out of the ocean. As thermal sciences professor Dr. John Abraham explained in the Guardian, “During an El Niño, the Pacific Ocean tends to have very warm waters at the surface, which causes heat loss to the atmosphere (so the ocean cools and the atmosphere warms). Conversely, during a La Niña, the reverse process occurs.”

Despite the 2016 drop, the last five years were still the five warmest years in the ocean on record.

This chart makes the rise in ocean heat since the 1950s much more clear. 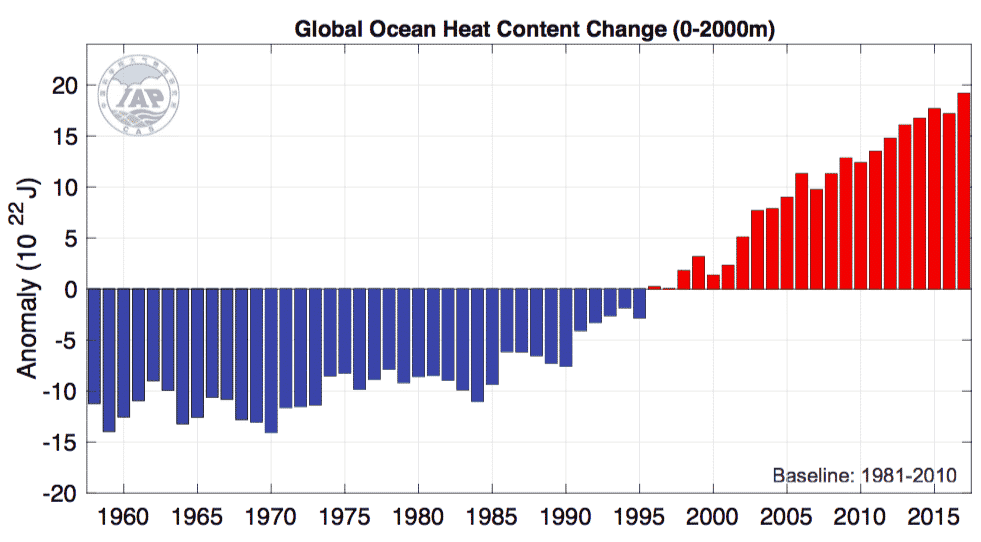 Change in global upper-level (0–2000 m) ocean heat content since 1958. Each bar shows the annual mean relative to a 1981–2010 baseline. The final bar on the right shows the 2017 value. Reliable ocean temperature records date back to 1958. IAP ocean analysis.

The study, published Friday in the journal Advances in Atmospheric Sciences, determined that the increase in ocean heat content for 2017 occurred in most regions of the world, with the Atlantic and Southern oceans showing more warming than Pacific and Indian oceans.

The research highlights how measuring ocean heat is key to tracking the impacts of climate change:

“Owing to its large heat capacity, the ocean accumulates the warming derived from human activities; indeed, more than 90 percent of Earth’s residual heat related to global warming is absorbed by the ocean. As such, the global ocean heat content record robustly represents the signature of global warming and is impacted less by weather-related noise and climate variability such as El Niño and La Niña events. The year 2016 was cooler than both 2015 and 2017 owing to the huge El Niño, which took some of the heat out of the ocean. According to the IAP ocean analysis, the last five years have been the five warmest years in the ocean. Measurements of ocean heating are a more reliable indicator than atmospheric measurements for tracking the vital signs of the health of the planet.”

Abraham, who was not involved in the study, described the findings as “truly astonishing” and noted that the consequences of ocean heating could include declining oxygen levels in the oceans, coral bleaching, and the melting of sea ice and ice shelves that cause sea level rise.

“The consequences of this year-after-year-after-year warming have real impacts on humans,” Abraham said. “Fortunately, we know why the oceans are warming (because of human greenhouse gases), and we can do something about it. We can take action to reduce the heating of our planet by using energy more wisely and increasing the use of clean and renewable energy (like wind and solar power).”

The Chinese study underscores that how the oceans’ health—and the health of its creatures—are greatly impacted by human activities.

A separate paper published in Science this week showed that the millions of tons of plastic that we leach into our seas each year are literally poisoning and killing coral reefs.

“The likelihood of disease increases from 4 percent to 89 percent when corals are in contact with plastic,” the researchers reported.

The researchers estimated that more than 11 billion plastic items are currently littered in coral reefs in the Asia-Pacific region alone. If plastic consumption does not change, the total number could rise to 15.7 billion items by 2025.

“Plastic is one of the biggest threats in the ocean at the moment, I would say, apart from climate change,” Dr. Joleah Lamb of Cornell University said.