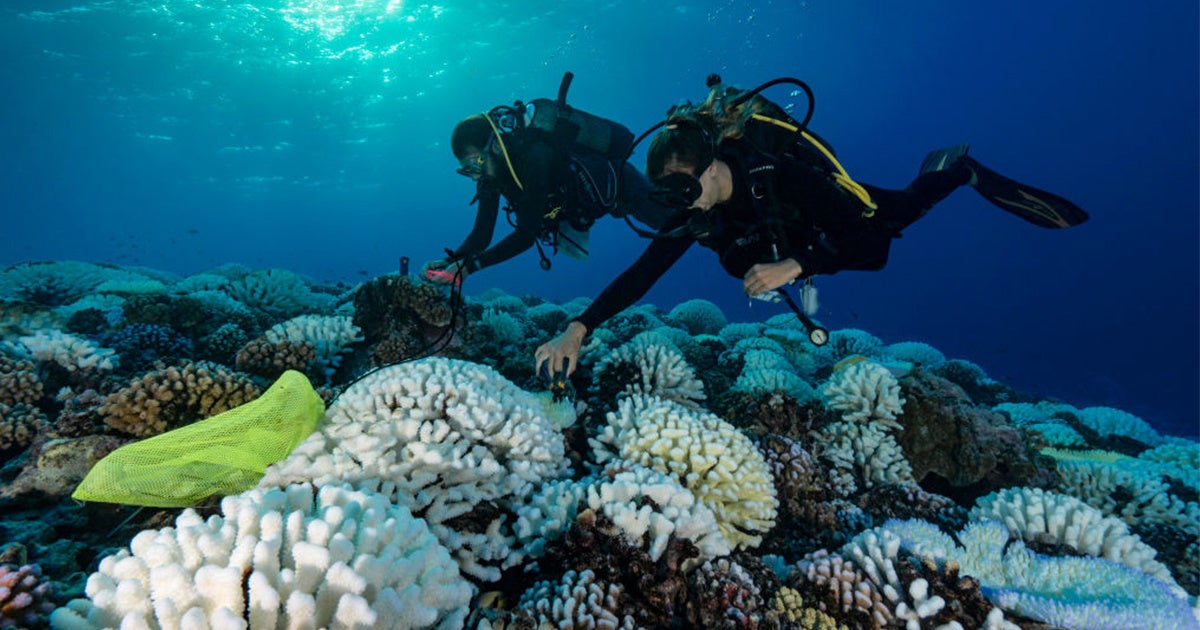 Divers search the coral reefs of the Society Islands in French Polynesia on May 9, where major bleaching is occurring and scientists are studying the resilience of coral. Alexis Rosenfeld / Getty Images

A changing climate is altering oceans in major ways and coral reefs around the planet may not be able to adapt to survive.

Ocean acidification (OA) occurs when carbon dioxide from the atmosphere is absorbed by seawater, resulting in a chemical reaction that reduces pH and calcium carbonate levels vital for the growth and repair of calcifying organisms like coral, explains the National Oceanic and Atmospheric Association. Publishing their work in Nature Climate Change, researchers examined four species of coral and two types of calcifying algae over the course of the year in order to determine how they might bounce back from stressful conditions.

“We found that corals and coralline algae weren’t able to acclimatize to ocean acidification,” said study author Malcolm McCulloch, adding that that the effects were rapid and persistent.

At least one-quarter of carbon dioxide in the atmosphere from coal, oil and gas dissolves in the ocean, according to the Smithsonian Institute. Changes in the ocean’s chemistry since the Industrial Revolution have been recorded at an unprecedented rate. In the last two centuries alone, ocean water has become 30 percent more acidic — not even natural buffering can keep up.

Because seawater contains high levels of dissolved substances, Woods Hole Oceanic Institute notes that ocean waters have a slightly alkaline, or basic, pH of around 8.2. As more carbon builds up in the atmosphere, we see higher levels being absorbed in seawater to form carbonic acid, which breaks down to become more acidic as the pH level drops. Calcifying organisms like coral grow by adding calcium carbonate from the seawater to their shells or skeletons, but the researchers note that some species are disproportionately affected in their ability to repair or grow as these levels drop.

“The results also confirm that Ocean acidification could have repercussions on the competition between species which could, in turn, affect the ecological function of reefs,” said lead author Steeve Comeau. In their findings, two of the species were found to be resistant to OA from the start of the experiment while two others were too sensitive to acclimate. Those species that were able to adjust have different physiological mechanisms at play, but the team notes that they aren’t sure what they are or how they work.

Coral respond to bleaching events caused by stress from pollution, overexposure to sunlight, extreme low tides, and changes in ocean temperatures by repairing via this calcification process. However, a 2018 study found that OA impedes the thickening or growing process of coral and decreases skeleton density, making them more vulnerable to breaking. Climate change and the advent of the Anthropocene are only expected to worsen these effects. Oceana notes that before the Industrial Revolution, about 98 percent of coral reefs were surrounded by waters with ideal levels of aragonite, but today the proportion is less than half. A study published reported by CBS found that climate change has caused an 89 percent decrease in new coral in the Great Barrier Reef, further validating that coral reefs are threatened by climate change and its repercussions.

Long-term assessments of OA are scarce and the scientific community is limited in its understanding of how it impacts corals and coralline algae. We do know that if there is a 20 percent increase in current carbon dioxide levels over the next two decades, corals will grow slower and will be less able to overcome even normal pressures.