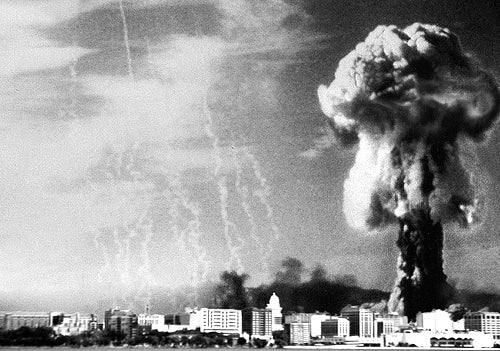 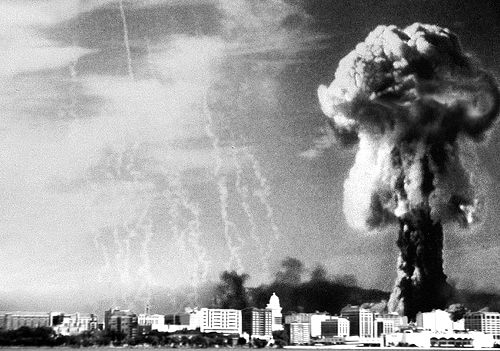 Today, Aug. 6, will be a day of solemn remembrance of those who suffered and perished in one of the most horrific and genocidal war crimes ever committed—the dropping of the atomic bomb on the civilian population of Hiroshima in 1945, equal only to the atomic bombing of Nagasaki three days later.

At least 225,000 civilians were killed in the Hiroshima bombing. Hundreds of thousands died later of cancers and thousands more inherited birth defects. But today will also be a day in which the 99% took action to ensure such destruction is never wrought on anyone ever again.

Nuclear weapons allow us to gauge the full extent of brutality that the 1%, which rules through exploitation, coercion and violence, is capable of committing.

Money spent on nukes is irradiating social programs for the 99%.

We further recognize that nuclear weapons have a bastard twin—nuclear power.

So-called “safe,” “civilian” nuclear technology is used to justify the fossil-fuel intensive mining of uranium in some of the worlds most economically decimated regions, in countries such as Romania and Niger, and on indigenous lands in South Australia and the American West. Continued reliance on nuclear power has led the people of earthquake-prone Japan to experience the radioactive horrors of Hiroshima and Nagasaki all over again with the continuing disaster at the Fukushima-Daiichi plant.

Today, people power challenges nuclear power. The Occupy Movement stands in solidarity with those threatened, poisoned and murdered the globe over by the 1%’s nuclear-fueled rule.

In the San Fransisco Bay Area, Occupy activists will gather in hazmat suits at the Japanese Consulate, drawing connections between nuclear weapons and nuclear power, Hirsohima and Fukushima, Japanese and U.S. reactors, as well as drawing attention to the near eternal life of nuclear waste. Occupy San Francisco says, “Our government disregards radioactive pollution from the corporations that fund elections, and the people are unprotected from the nuclear threat.”

Occupy Wall Street and affiliate groups in New York City will congregate at 30 Rockeller Plaza, headquarters of General Electric, the builders of the melted-down reactors at Fukushima. Demonstrators will be staging a die-in, or melt-in, calling attention to the costly and continued development of nuclear weapons and nuclear power technology in concert between the government and corporations.

GE brings good things to death. The mega-corporation, along with its Japanese nuclear partner Hitachi, is seeking permission from the industry-captured U.S. Nuclear Regulatory Commission to build a new uranium enrichment facility in Wilmington, N.C. The facility will utilize new laser technology that makes the processing of nuclear fuel swifter and more convenient for the 1%’s weapons and power plants.

Occupy Nukes demonstrations will be held at: