Ocasio-Cortez Fires Back at Trump Over Green New Deal 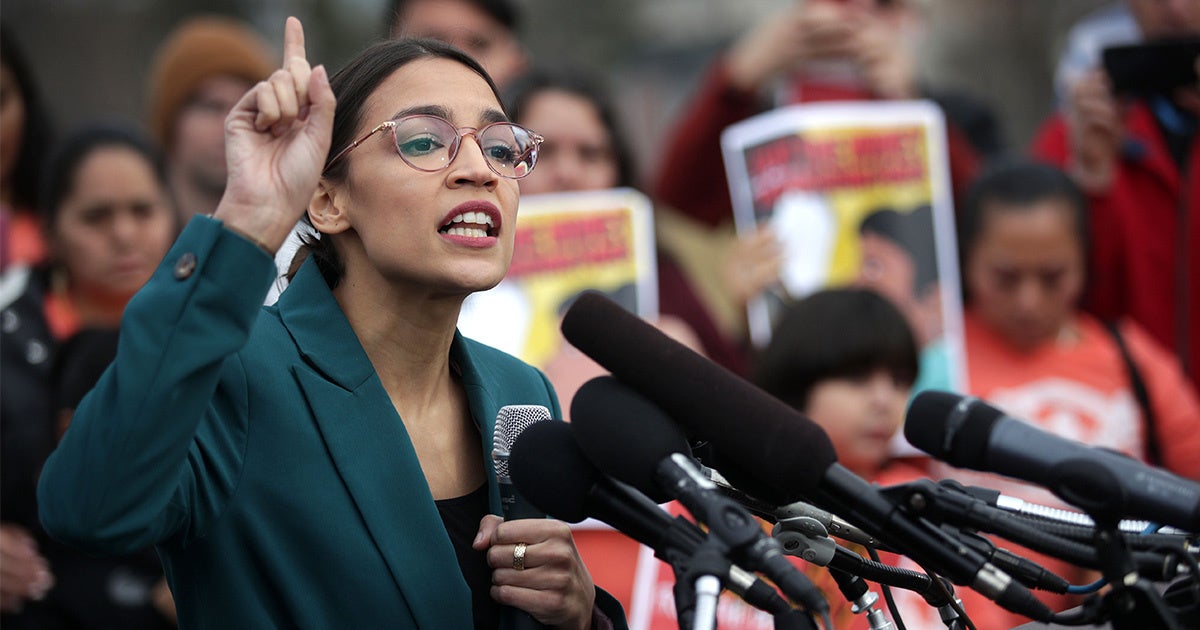 Rep.
Alexandria Ocasio-Cortez‘s sweeping Green New Deal resolution was never going to be embraced by her Republican foes, but she’s taking the criticism in stride—even if the missives come from the very top.

At his El Paso, Texas rally on Monday,
President Donald Trump referred to her signature issue as a “high school term paper.”

“Last week they introduced a massive government takeover that would destroy our incredible economic gains. They introduced the so-called Green New Deal,” the president
said in his speech. “It sounds like a high school term paper that got a low mark.”

The star Democrat from New York did not back down from the president’s remarks.

She then included a quote from a
Washington Post report about how Trump skips written intelligence reports, which are usually dense and lengthy, and relies on oral briefings instead.

Ah yes, a man who can’t even read briefings written in full sentences is providing literary criticism of a House Resolution.

(“Reading the intelligence book is not Trump’s preferred ‘style of learning,’ according to a person with knowledge of the situation.”
– @washingtonpost) https://t.co/O7daeYlXZO

That wasn’t the problem the president had with the Green New Deal. Trump falsely claimed in his rally speech that the deal would “shut down” American energy and air travel.

He claimed the resolution would “take away your car, reduce the value of your home and put millions of Americans out of work.”

Trump’s comments are akin to his
tweet on Saturday, where he also took a jab at the Green New Deal.

The president was probably referring to a widely circulated FAQ section, in which Ocasio-Cortez’s office quipped, “we aren’t sure that we’ll be able to fully get rid of farting cows and airplanes.” But that statement was in reference to bringing U.S. greenhouse gas emissions “to net-zero, rather than zero emissions” within 10 years.

Republican lawmakers and other critics have pounced on what has been called the “botched rollout” of the Green New Deal, which is also sponsored by Ed Markey (D-Mass.) in the Senate. The most prominent issue was language on a Feb. 5 blog post on the congresswoman’s website that called for economic security “for all who are unable or unwilling to work.” That information has since been retracted.

Republicans bashed the concept of the "Green New Deal" as technologically impossible, unimaginably costly and a “socialist fever dream” that they said would cost Democrats moderate seats across the country https://t.co/ErzfAyE3uK pic.twitter.com/eoVyDYtili

Despite the naysayers, momentum for climate policy has been growing ever since its was popularized by Ocasio-Cortez as well as the young climate activists of the Sunrise Movement who staged a sit-in inside then-presumed House Speaker Nancy Pelosi’s office not long after the midterm elections to demand a Green New Deal.

As EcoWatch previously wrote, ideas outlined in the proposal include “unprecedented levels of prosperity and economic security” for all citizens and “meeting 100 percent of the power demand in the United States through clean, renewable, and zero-emission energy sources.”

The non-binding resolution calls for a wide-ranging mobilization of the U.S. economy and creating jobs through infrastructure and industrial projects, such as zero-emission vehicle infrastructure and manufacturing; installing smart grids; updating or creating buildings that are energy efficient; expanding clean energy jobs (like solar, wind turbine, battery and storage manufacturing); cleaning existing hazardous waste sites; and restoration of damaged and threatened ecosystems.

Along the same lines, the plan includes a significant social justice component because it aims to create millions of family-supporting and union jobs and will help protect disadvantaged communities on the frontlines of pollution and climate change.

The Green New Deal is a bold plan to shift our country to 100% clean and renewable energy. We do not fight this fight for our generation alone  but for generations to come.https://t.co/Mzi2Y2LZg0

The U.S. is the most powerful economy on earth and we must lead the world in the fight against climate change. We can do that by passing the Green New Deal to save the planet and create millions of new jobs.

A #GreenNewDeal is ambitious. It's bold. And I’m cosponsoring this resolution with @aoc and @senmarkey because it’s exactly the kind of action it will take to conquer the biggest threat of our lifetime. https://t.co/CfQFgBnlat

The first question I was asked in Iowa was about #GreenNewDeal. The hard truth is climate change has imperiled our planet—it’s going to take bold action now to save it including dramatic investment in green energy that will create the jobs of the future. We can do this. pic.twitter.com/zdU26AjcNN

If we want to live in a world with clean air and water, we have to take real action to combat climate change now. I'm proud to join @RepAOC and @SenMarkey on a #GreenNewDeal resolution to fight for our planet and our kids’ futures.